The Walking Dead: All Out War Brings The Infection To The Table - Nerdist

The Walking Dead: All Out War Brings The Infection To The Table

You don’t have to go far to get your fill of walkers these days. With the Walking Dead comic book series, the television show, the spin-off, Fear the Walking Dead, and various apps and video games, life is already pretty full of walkers. However, there hasn’t really been much of anything for those Walking Dead tabletop fans–until now that is.

Mantic Games recently ran a Kickstarter to fund their newest project, a miniatures game based on the comic book called The Walking Dead: All Out War. Backed by over 3,000 people who raised over $680,000 in just 28 days, this game captures the brutal world of The Walking Dead that we’ve all come to love and its inhabitants’ fight for survival in the midst of insane circumstances. Everything is out to get you in this game, and it truly exemplifies the series’ unofficial motto: Fight the dead, fear the living. 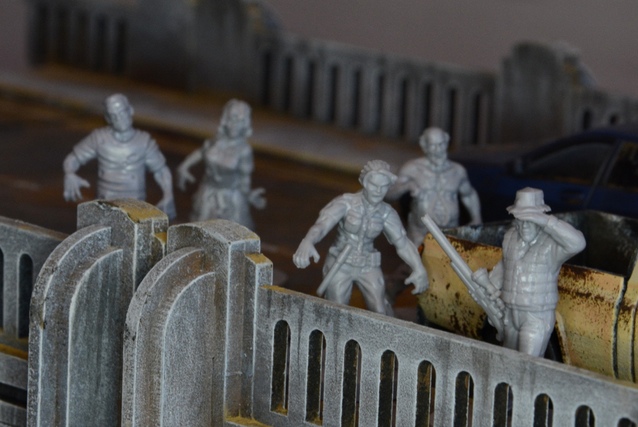 One of the things that makes this game so cool are the detailed miniatures you get to play with. Each of the character minis are based on actual characters (and modeled after what they look like in the comics, not the TV show). The minis look amazing, and comic book fans will be stoked to see how detailed they all are. Of course, you have to get to know your character to play them effectively, so the game provides players with character cards which have stats and abilities and are upgradable throughout the game. Should you be so inclined, the game also allows for players to create your own characters.

But what is The Walking Dead: All Out War? The game itself is set in the suburbs of Atlanta, where you and your group have to travel through the ruins of modern civilization (the game comes with a game mat and miniatures to give that authentic, post-apocalyptic feel) where you have to scavenge for resources, raid enemy camps, and do what you can to block walkers and heavily-traveled walker paths. Everything you do is under the constant threat of walker attacks, so you must always be careful to not alert a herd while you’re fighting with rival survivor groups. The game combines all of the fun parts of zombie and post apocalyptic stories by being part conquer-the-world, part survival, part fight-the-bad-guys, and part zombie-hunting.

Did you back Mantic’s new Walking Dead game? What are you most excited about? Have you ever backed a tabletop Kickstarter before? Tell us about it in the comments!