The Universe in the Palm of Your Hand: A Look at Star Realms - Nerdist

The Universe in the Palm of Your Hand: A Look at Star Realms

In the distant future, a population explosion and mounting hunger threaten the survival of humanity. Earth’s inhabitants began exploring outside of their solar system, finally tapping into the resources of other planets.

As this colonization began, different factions rose to power to stake their claim on these news planets. The Star Empire and the Trade Federation were the two major governments when the Blobs attacked. Not much was known about the mysterious alien Blobs, but they fought back against the human expansion. During these wars another faction was created from the survivors: the Machine Cult.

All four factions are now living a tenuous coexistence and it is up to you and your opponent to form coalitions with one or more of these factions to launch your own Star Realm.

The award-winning Star Realms game has been released in a new app that adds real-time gameplay, the Colony Wars expansion, and an updated look and soundtrack. Created by Magic Pro Tour Champions and Hall of Famers Darwin Kastle and Rob Dougherty (developer of Ascension), Star Realms brings intuitive card play and direct confrontation to the deck building genre. Players familiar with deck-building will dive into Star Realms and figure out the many powerful combinations between factions. New players will find it easy to learn and quick to play. 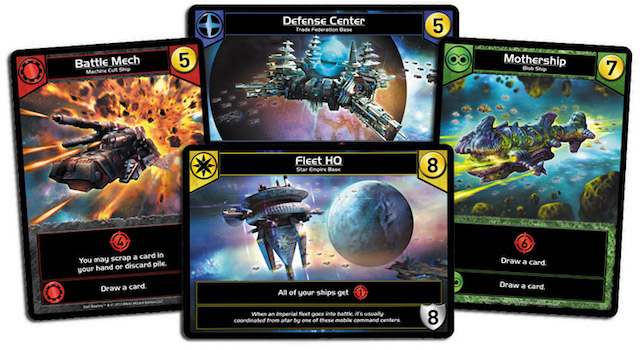 Each player begins with a deck of 10 basic spaceship cards: Scouts yield Trade value while Vipers produce Combat strength. In the middle of the play area, there’s a row of six face-up cards, each one a more powerful ship, protective base, or outpost. As each card is purchased and added to that player’s deck, another one from the trade deck replaces it.

During each turn a player will play five cards and use Trade to purchase cards from the center of the row, then deal damage with their Combat against their opponent. Each Combat point saps one Authority point from the opponent. The first player to lose all 50 starting Authority points is eliminated. 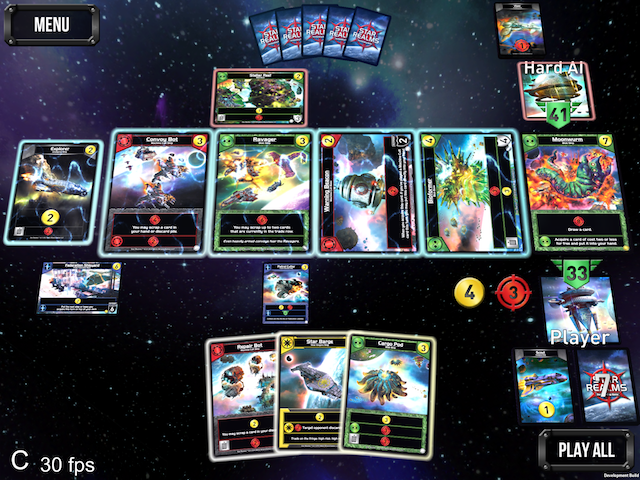 I have both the analog and digital versions of Star Realms and they’re my deck builder of choice when I want a quick game that satisfies my sci-fi cravings. It’s a blast figuring out what cards work together and you can choose to focus on one particular faction as their cards are revealed or you can mix and match to build the most efficient deck possible.

The Star Realms app has two distinct advantages over its real-life predecessor: first, the fiddly tracking of players’ Authority and, second, the Trade and Combat generated by the multiple factions are both easily handled by the app. As players buy more powerful ships, the combinations can become a dizzying array of card draws, discards, and extra Trade and Combat, and the app keeps track of everything instantaneously, freeing you to ponder those crucial decisions during a match.

The newly released Colony Wars expansion ($4.99) features 43 new cards with several new mechanisms such as copying any base’s power or immediately playing a purchased card. There’s also a Colony Wars campaign that adds an engrossing storyline as well as new challenges. Other expansions are available that add different elements to gameplay, from the opening random cards in the Gambit expansion to the Events, Heroes, Bases, and Battleships of the Crisis expansion.

The Star Realms base game is free and allows you to play against an easy AI opponent. Upgrade to the full version (which unlocks it for all platforms) via an in-app purchase and you’ll have a much richer experience, with a 15-mission single-player campaign, three levels of A.I. difficulty, a pass & play mode, and the new real-time play option.

The Star Realms app is available for Android, iOS, and Steam. The Colony Wars expansion is $4.99.

What factions help you conquer the galaxy? Tell us in the comments!

The following article was sponsored by White Wizard Games