The Undead on Your Tabletop: 5 Zombie Games for Every Type of Gamer - Nerdist

The Undead on Your Tabletop: 5 Zombie Games for Every Type of Gamer

With the recent news that WizKids was taking Axis & Allies into the world of the undead, zombie games can now be found in nearly every nook and cranny of the hobby.

Whether you’re looking for a story-driven immersive experience or some quick dice-chucking between longer games, there’s a zombie-infested game for everyone.

An underrated gem from designer extraordinaire Martin Wallace, Hit Z Road features stellar artwork and a metagame that’s head and shoulders above the rest. In this card-driven game players lead their band of survivors across post-apocalypse America in search of a safe haven.

Each turn you’ll choose a path to take on your journey home. Along the way you’ll gather bullets to fight the undead, fuel to outrun them, and energy to survive. When you encounter zombies, you’ll perform range and melee attacks via six-sided dice. The more survivors and more resources your group has, the better chances you’ll have in combat.

If anybody survives, then the one with the most points wins. Even if nobody makes it to the end, you can still enjoy Hit Z Road’s attention to details: from the rulebook to every card in the game, there are inside jokes and sly references to the genre. 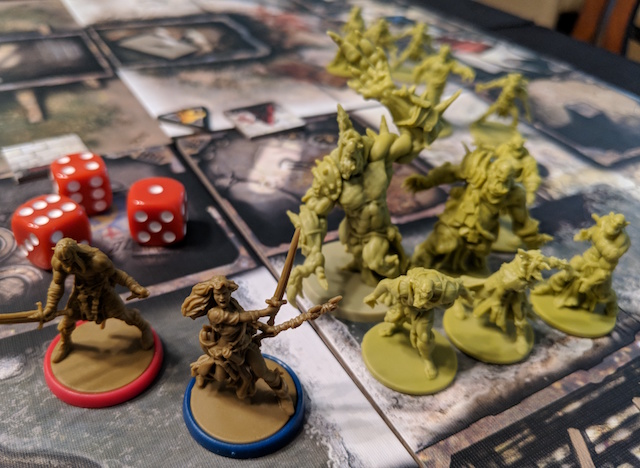 You’ve watched all of George Romero’s movies. You’ve seen every episode of The Walking Dead. Now you want to see if you could blast your way out of one those impossible scenarios.

Look no further than the Zombicide franchise. The best shoot-em-up zombie game out there, each edition of Zombicide is chock full of gorgeous miniatures, modular game boards, and action-packed quests for you and your fellow zombie hunters.

During each cooperative adventure for 1-6 players, you’ll wander in and out of buildings searching for items that will help you kill off the continuously spawning undead.

With scenarios set in the classic mall setting, a prison, and even in the medieval times, there are always new and exciting challenges as you fend off the hordes. Be sure to check out our breakdown of the latest entry, Zombicide: Green Horde. 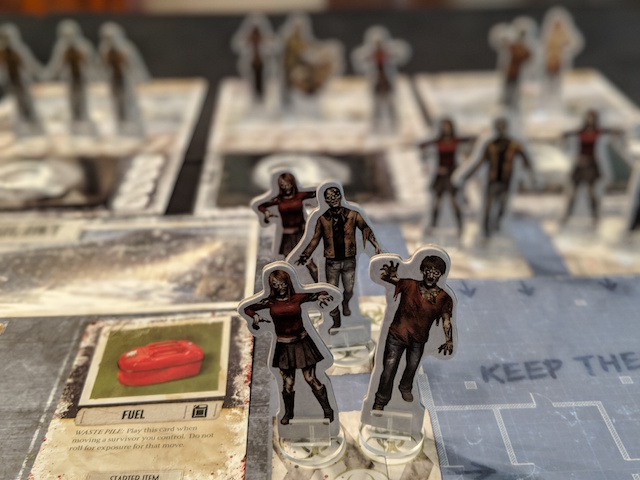 A story-driven, cooperative-with-a-possible-traitor game of survival in the post-apocalyptic world, Dead of Winter captures the dread of trying to survive during the end times.

Each game has a different objective and you’ll use your actions to draw cards for supplies, weapons, and other useful items to deal with your cold and bleak surroundings. You’ll roll dice to see if you survive zombie attacks, hoping to avoid the 1-in-12 chance of instant death. And you’ll work with others to determine if someone’s double-crossed you.

The sense of paranoia and claustrophobia is heightened by the Crossroads cards drawn before every player’s turn. Will you make the right choice to help the group? Will your choice unleash more zombies onto the colony? Or has somebody already sabotaged your chances at winning? 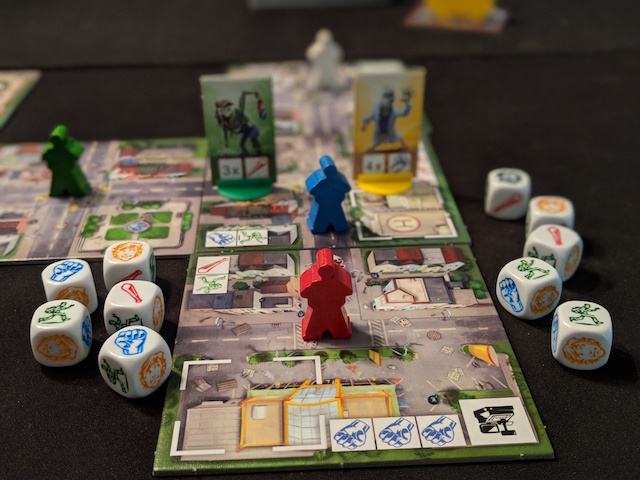 This real-time, tile-laying, dice-chucking game has the most fast-and-furious action of any zombie game. Set to a 15-minute soundtrack, your group has exactly that much time to gather resources, get to a van, and high-tail it out of the zed-infested town.

Fans of Escape: The Curse of the Temple will be familiar with the tension in the this game, but they’ll soon realize that Zombie City ups the ante in all respects. Not only do players have to roll the right combinations to unlock new tiles and gather items, but they’ll have to fight zombies and work together to drive the van to safety.

You’ll wear out the edge of your seat rolling and re-rolling the dice and you’ll need every second of that 15 minutes to escape Zombie City.

Only have a few minutes and want to get your zombie on? You and your friends are the zombies in this quick dice-rolling game, where the goal is simple: collect those delicious braaaaiiiinnnnsssss.

If you decide to push your luck, then you’ll re-roll any footsteps and roll three more random dice. Avoid any more shotgun blasts and collect 13 brains to win.

What are your favorite zombie games? Tell us in the comments! And be sure to check back here on GeekandSundry.com for  Game the Game episodes every Thursday morning.