Recently NASA announced that they partnered up with Marvel Custom Solutions to create a new patch for the Center for the Advancement of Science in Space (CASIS). The patch was designed by Marvel cover artist, Juan Doe, who is known for his striking, graphic style, and presented at San Diego Comic Con. It features two of our favorite space explorers from Marvel canon Rocket Raccoon and Groot and is utterly adorable, but the CASIS patch is not the only pop culture inspired patch to make the journey into space. NASA has a long history of incorporating some of their favorite characters into their official logos. 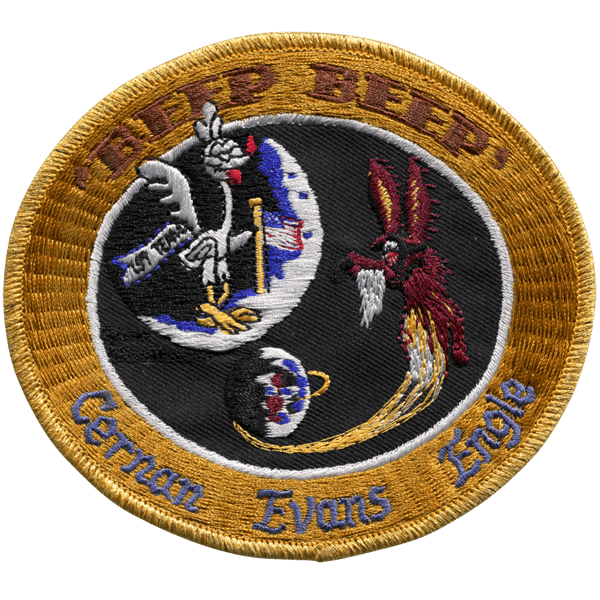 This patch was designed as a joke for the the backup crew for Apollo 14. Before the launch, the back-up crew hid these patches throughout the shuttle for the main crew to find. The patches caused Alan Shepard, commander of the Apollo 14 crew, no end of frustration as they popped out of every nook and crannie. According to The Last Man on the Moon, a book by Eugene Cernan, “Perhaps the most repeated phrase on the private radio loop during the flight of Apollo 14 was Shepard’s annoyance when still another patch would suddenly appear. ‘Tell Cernan,’ he growled, ‘Beep-beep, his ass.'”

In 2003, Warner Brother’s officially designed patches for NASA. This time for the Mars Exploration Rover Missions and featuring Duck Dodgers and Marvin the Martian. “Daffy Duck and Marvin The Martian struck us as such a perfect fit, capturing the fun and adventurous spirit of these important explorations, that we were delighted to be able to include them as honorary members of the team,” said Captain David Krambeck of Team Delta. 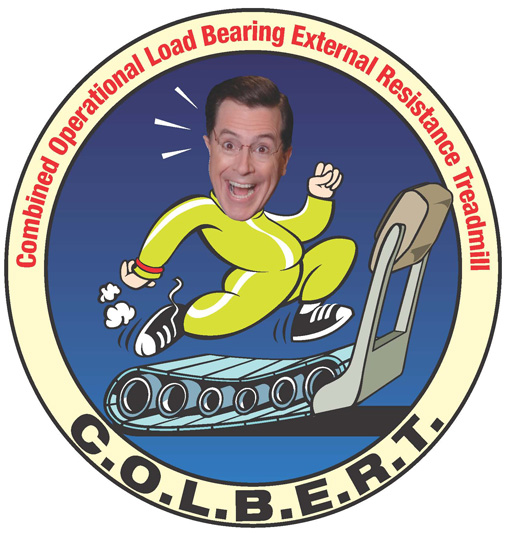 While it might look like an intern’s first attempt at using photoshop, this is a real patch that was created for NASA. In 2009, astronaut Suni Williams appeared on on Comedy Central’s “The Colbert Report” to let Stephen know that his name would be forever memorialized as the official title of… a treadmill. The Combined Operational Load Bearing External Resistance Treadmill (C.O.L.B.E.R.T.) was created to allow astronauts to run without creating vibrations which might disrupt experiments. The naming was a consolation prize for Stephen after he encouraged his viewers to vote to name the International Space Station module after him. 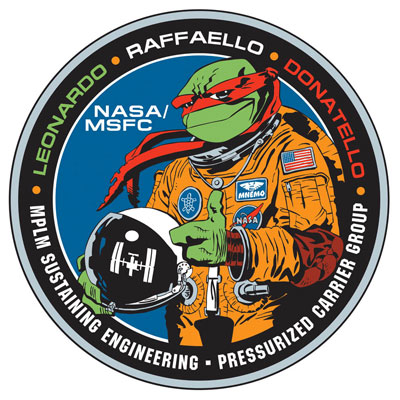 The Multi-Purpose Logistics Model of the International Space Station was designed to carry cargo to and from the station. Three modules were built by the Italian Space Agency and named: Leonardo, Raffaello and Donatello. Someone at NASA realized that these were named after three of the four turtles and the rest was totally tubular history.

With geek culture becoming more and more mainstream, we expect to see more awesome characters being featured on NASA’s patches. If you are interested in owning your very own nerdy NASA patches, many of them can be found for sale online by intrepid collectors.

Which characters would you like to see on future NASA patches? What do you think Rocket and Groot would say if they saw themselves emblazoned on an earthlings uniform? Let us know in the comments below!