The Subtle Bravery of Eeyore in WINNIE-THE-POOH - Nerdist

by Donna Dickens
For almost one hundred years, children have fallen in love with A.A. Milne’s characters from Winnie-The-Pooh.

The stuffed toys that come to life and have adventures remain timeless avatars; their personalities and struggles resonate with adults for their hidden complexity, but are easy enough for children to grasp. Pooh is innocence, Piglet is anxiety, Tigger is boisterousness, and Eeyore? Eeyore is bravery.

As a child, I must have watched the various Disney incarnations of Winnie-The-Pooh hundreds of times–kids love repetition, after all. From Welcome to Pooh Corner to the animated Many Adventures of Winnie-The-Pooh, I spent hours inside the world of the Hundred-Acre Wood. I recall playing Poohsticks, covering myself head-to-toe in mud, and even jumping off a ledge with a helium balloon in the hopes that maybe physics wouldn’t work this time. Yet one thing always bothered me. Why couldn’t the gang make Eeyore happy? 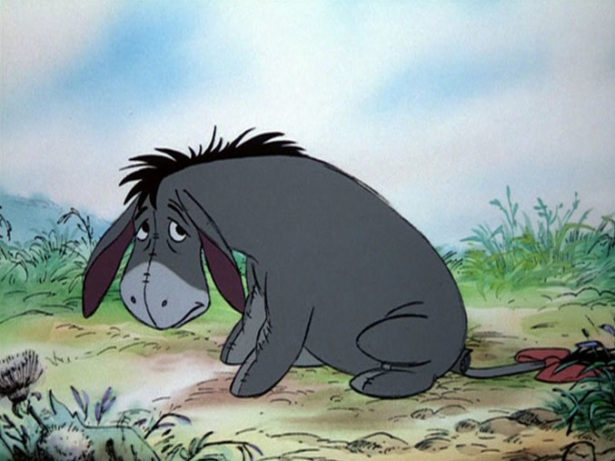 I saw Eeyore feeling dejected and depressed and I wanted to make him feel better. “Someone hug him,” I would quietly admonish while eating my Rainbow Brite breakfast cereal. But it was the same every time: there was Eeyore being sad while playing Poohsticks; being sad while living in his little stick house; being sad because he lost his tail, and why won’t someone just sew it on so he’ll stop being sad?

As I got older, that desire to empathize with fictional stuffed animal was transformed by teenage cynicism. I thought the height of maturity was decreeing every member of the Hundred-Acre Wood needed to be medicated for various psychology maladies. I wouldn’t be able to see Eeyore clearly, and why I so desperately wanted him to be happy, until I had kids of my own.

Coming back to The Many Adventures of Winnie-the-Pooh as an adult, like retreading anything from childhood, revealed layers I hadn’t initially realized–especially when it came to Eeyore. Over the hundreds of times my kids asked to watch the DVD, I realized Eeyore was teaching two very important lessons by simply existing. He showed children how to include a friend who might not be as upbeat and chipper as the rest of the group. And more importantly, he illustrated that it’s okay to be gloomy, as long as it doesn’t consume you. Growing up in a household where negative emotions were “demonic” and my depressed mother made herself cheerful through sheer force of will, I had no baseline for how to deal with a non-happy person other than to “fix” them. Eeyore tried to show me he didn’t need to be fixed, but I couldn’t see it back then. 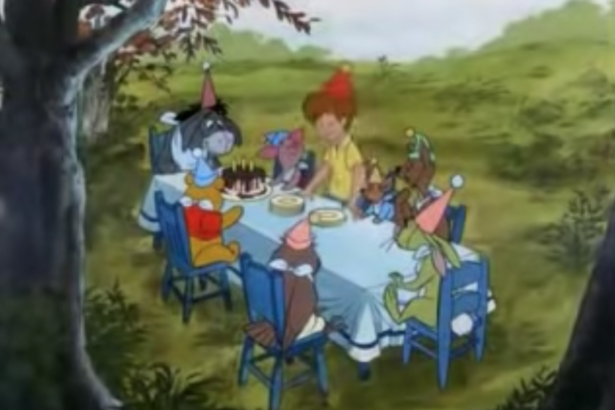 In the episode “Winnie-the-Pooh and a Day for Eeyore,” the gang discovers Eeyore is particularly sad because no one remembered his birthday. Distraught by this oversight, Pooh and Piglet rush home to get gifts for their friend. Pooh tries to give Eeyore a pot of honey but ends up eating it on his way to Eeyore’s house. In a moment of inspiration from Owl, Pooh decides to label the empty jar as a place to store things. Piglet tries to give Eeyore a red balloon but pops it before he arrives. Of course, Eeyore doesn’t mind. He loves the color red and is thrilled to have a place to store the beautiful scrap of rubber and string. In the end, Christopher Robin throws Eeyore a party and Pooh teaches him how to play Poohsticks. It turns out Eeyore is a natural.

So what’s brave about any of this? Eeyore shows up. He accepts his friends’ apologies. If you have ever lived with depression, you know that alone is a Herculean feat. Despite his proclivities towards pessimism, Eeyore doesn’t shut himself off from the world. It’s important for children (and adults) to see that happiness is an emotion, not a constant. Being a friend, hanging out, and helping others is not inextricably linked with being cheerful.

Throughout his residence in the Hundred-Acre Woods, Eeyore consistently shows up for his friends. When Owl loses his house in Winnie-the-Pooh and the Blustery Day, Eeyore braves a flood to find Owl a new home because he knows what it’s like to see your domicile destroyed. When Tigger is sad that he is the only one of his kind, Eeyore writes “Keep smiling” in the card the gang creates to help him feel better. But perhaps nothing embodies Eeyore’s essence like his song from the live-action Welcome to Pooh Corner, “Never Give Up.” It’s easy to try when you’re happy. When you’re gloomy? Trying is brave.