If you’re headed to PAX West this year, you may want to take some time to visit the Olive 8 Hotel’s Third Floor. Tucked away in a few of those rooms will be thousands of portals ready to whisk you and your friends away to other worlds. These portals aren’t video games or virtual reality set-ups, but the rules and campaign settings of the Alexandria RPG Library’s growing catalogue of classic RPGs – none published in this millennium.

The Alexandria RPG Library is the brainchild of David Carnahan. He was inspired to create the library after bringing some of his own titles to an event. “We have classic console and arcade setups” he said when I reached out, “so why not RPGs”. With that idea, David donated his own collection supplemented with a couple thousand dollars of additional titles “to fill some holes” as he put it. The inaugural grand opening of the library occurred at the Emerald City Comic Con to a warm reception.

David shared a number of stories with me. Gamers rediscovered systems they’d played as children and were then introduced to new games they hadn’t heard of. People sat and exchanged stories from their campaigns like weary travelers in a tavern. He even managed to turn it into a learning experience – “I had a kid ask about ThAC0 and I just handed him the 2nd ed AD&D Player’s Handbook and he came back 45 minutes later and said he would not complain about 5th ed ever again.” 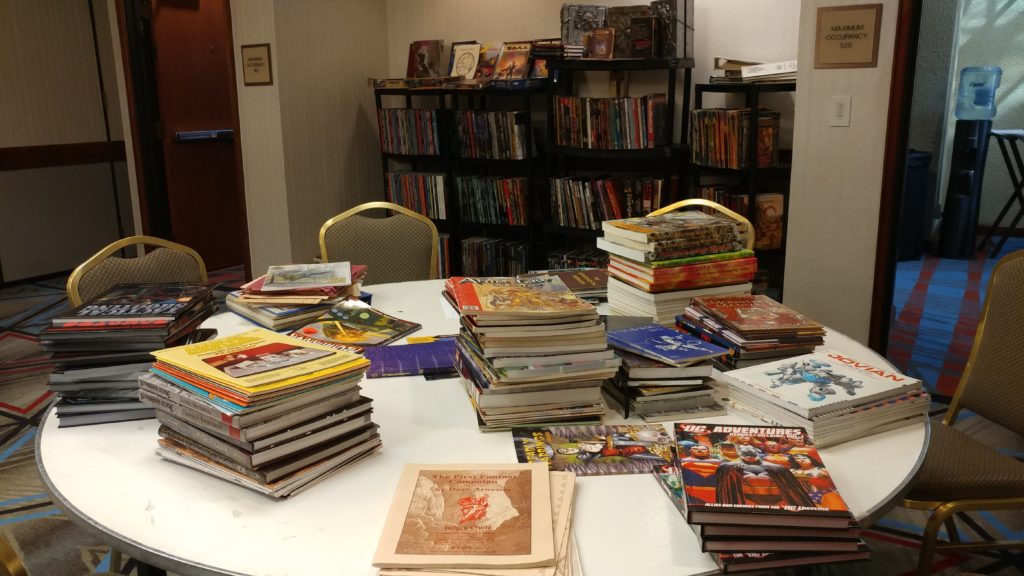 From that initial event, the library has grown quite a bit through community support. People have mailed David up to 50 pounds of books so that others can play them. Publishers like Steve Jackson Games, Flying Buffalo, and Wizards of the Coast have helped ensure that there are games to play and settings to explore. Individuals have scoured their closets to donate source materials and keep these games alive. It’s not just the rules that David saves; the library is also becoming the living home of player made worlds.

In a recent lot of almost 250 books, he discovered something truly special. A man who was slimming down his personal collection dropped off a large lot of RPG materials that he had accumulated over the years. Some were his but many belonged to his father. Among those materials was a large binder full of notes and stories that his father had taken while creating an RPG world. The earliest dated material was from the 70s, but the campaign had been adjusted for Dungeons & Dragons 2nd Edition and work had begun on the translation to 3rd. My own first experiences with D&D were with 3rd edition; it’s amazing to hear that someone was lovingly translating a world conceived before I was born into something I could have played. Now I actually can.

While the donor assumed that the binder wouldn’t be something of value, David leaped at the chance to preserve this artifact of RPG history. “His father David Young made this wonderful world to take friends and family through over the years.  I will be showing it every time I [run] the library.  John was almost in tears with the thought that his father was going to live on through this world that he had played in most of his life.”

While simply presenting this collection is exciting in its own right, David wants to ensure that the Library lives up to its name and is more than a museum. He wants you and anyone who visits to be able to play the games. While he tries to organize events and find GMs, he’s not afraid to run them himself. “At [Emerald City Comic Con] I had a bunch of teens that had never played table top RPGs sit down and roll up characters in Deadlands.  One of the kids came back a different day and said they had bought the core book for the game and were going to be playing thanks to the library.  Another time I had a bunch of 12-year-old boys and their dad at an event and I ran them through a West End Games Star Wars setting.  At the end of the game the kids all gave me hugs.” David has long believed in the power of tabletop games to bring people together and is putting that into practice through his library.

The RPG library has over 600 entries in its online database, with more games added daily. They currently have plans to attend PAX West, Dragon Flight, and the Jet City Comic Show. Through their Patreon, David hopes to raise the funds necessary to grow the library and travel to more conventions. They’ve already received requests to travel to Florida so hopefully, they’ll soon be at a con near you!

What was your first RPG? What games would you check out from the library?