Shane Black's THE PREDATOR Is at War with Itself (Review) - Nerdist

Shane Black’s THE PREDATOR Is at War with Itself (Review)

In 1987, wunderkind action screenwriter Shane Black appeared in John McTiernan’s Predator as the nerdy, dirty joke-spewing Hawkins, the same year his debut screenplay, Lethal Weapon took Hollywood by storm. Predator became a cultural phenomenon, spawning several sequels and a spin-off, and now, 30 years later, Black returns to his roots as the director of his own The Predator.

Back when it was announced, The Predator showed so much promise. The first image of the cast, which Black tweeted out, showed Sterling K. Brown, Trevante Rhodes, Jacob Tremblay, Olivia Munn, Boyd Holbrook, and Keegan-Michael Key suited up and strapped. What a cast! What a director! The trailers teased military conspiracies and intimate, up-close-and-personal interactions with everyone’s favorite dread-locked alien creature. But oh, how The Predator fails to deliver on that promise.

Black may be a part of this franchise’s origins, but as the messy, chaotic, and convoluted The Predator proves, he’s not the right filmmaker to shepherd this property to its next evolution. The film has a serious identity crisis—is it a comedy or an action film? The original Predator may have had some memorably funny lines, but it knew what it was: an efficient, contained, and brutally savage supernatural action flick. 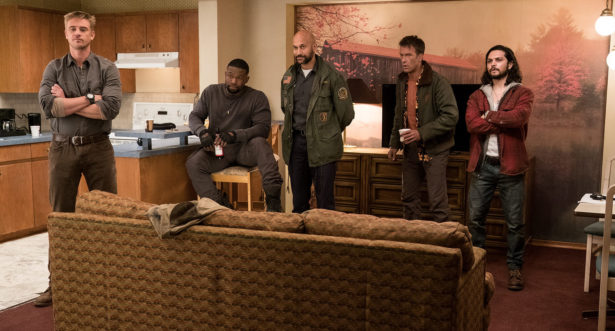 In The Predator, comedy and action are at war with each other. Characters spew rat-a-tat quips, while tussling with Predators and their pets, essentially neutralizing the effect of both the humor and the action. We’re given nothing to hook into, so it’s impossible to care about any of the events, which are wildly incomprehensible anyway. It devolves into a mundane mush of bullets and neon-green blood, hardly recognizable as one of Black’s usually slickly-plotted and stylishly-executed detective noir features.

Black co-wrote the film with Fred Dekker, with whom he wrote the ‘80s kids horror romp Monster Squad, so it’s no surprise that The Predator follows a group of wacky characters known as “The Loonies.” This time, they’re a group of mentally unstable military men, and one evolutionary biologist, Dr. Casey Bracket (Olivia Munn). Rhodes, Key, Thomas Jane, Alfie Allen, and Augusto Aguilera are a group of wise-cracking head cases with whom sniper Quinn McKenna (Holbrook) falls in after an encounter with the Predator on assignment in Mexico.

Their bus to the lobotomy ward is diverted after the captured Predator breaches a high-tech lab on the military base where they’re located, and sets off one long, bloody game of cat and mouse. One Predator is searching for some missing gear Quinn purloined from the ship, while another, bigger Predator is searching for the smaller Predator. But what do the Predators want—are they fighting each other? Are they secretly helping humankind?

Black seems to be an incredibly loyal person. That may be a good quality, but it gets in his way in The Predator (especially concerning his casting choices—check the news). The opening sequence and climax, taking place in thickly forested settings, are a direct tribute to the original film, and the snappy dialogue constantly references the franchise and its many iterations. There are a few distinctly Black elements, like a kid character (Tremblay), and a holiday (Halloween) as a backdrop, but it almost seems parodic. While the inside jokes and wink-wink nudge-nudge fan service provide the laughter of recognition, they get in the way of actual writing. 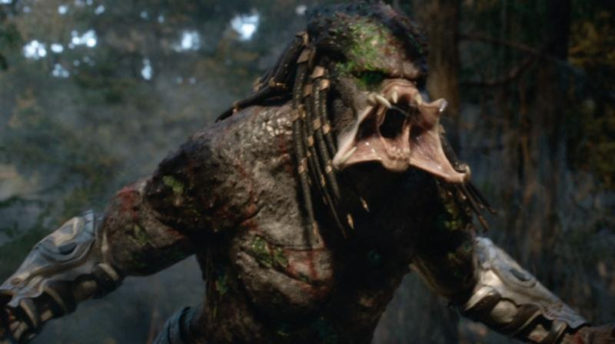 In the script, characters are poorly sketched (Alfie Allen gets three lines, max), none of the motives are clear, and neither is the onscreen geography. The Predator rips by at a breakneck pace that is almost impossible to keep up with, and feels edited within an inch of its life. Much like a carcass left hanging in the trees, there’s so much connective tissue missing.

Furthermore, the film has no idea who the real stars are. The powerfully magnetic Rhodes should have been the lead, and he steals every moment he’s on screen. Brown is also a hoot in an almost unhinged performance as an evil military scientist. But Holbrook, as our hero, is just odd, inconsistent and dull, while Munn is saddled with the thankless token female role, the target of the jokes and inappropriate attention. Unfortunately, she’s doesn’t get the chance to rise to the occasion as an action hero either.

The Predator starts out strong, and there are some genuinely funny lines, but it nosedives quickly. Black loses all control over the tone and the pace, which ruins the elements that we might actually care about—story and character. It’s a damn shame to think about what could have been with The Predator.