Outdoing Cosmo the Space Dog and Howard the Duck’s surprise post-credits appearance in the first Guardians of the Galaxy movie, Vol. 2‘s multiple stingers tease a whole cavalcade of obscure characters. Some are so obscure, even diehard Marvel zombies will have to dive back into their Official Handbooks and review a few bios. Let’s save everybody some trouble, though. For the uninitiated who’ve seen the flick, and furrowed their eyebrows confusedly over its cameos, here’s a bite-sized history lesson to clear up one mutli-layer in-joke that ties right at how… unexpectedly the GotG have evolved over the years. 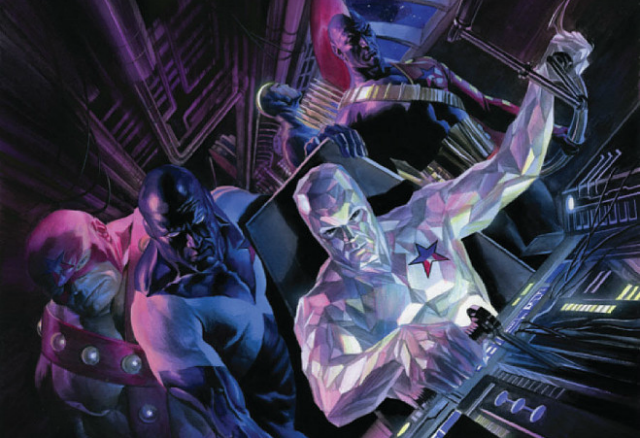 So, Marvel makes a fan theory (somewhat) true by revealing how Stan Lee has actually been playing an informant to the mysterious Watchers throughout all his cameos. Ayesha all-but-confirms that the pulsating cocoon first glimpsed in the Collector’s gallery will soon birth her lover, Adam Warlock. And Jeff Goldblum’s Grandmaster pops up ahead of his proper movie debut in Thor: Ragnarok. However, our focus goes to Stallone, of course, and that other group of Ravagers he leads. Who is he? What’s his history with Yondu? The answers are actually a bit complicated because–like the Defenders–the Guardians of the screen are a bit different from the Guardians on the page. Well, at least from how they’ve been depicted traditionally.

It’s easier to start at the beginning. 1969, to be precise. A good eight years before Star Wars became the catch-all comparison point for space opera in pop culture, the Guardians of the Galaxy debuted in an inventory story for Marvel Super Heroes. The team’s roster included the stout Charlie-27 (now played by Ving Rhames), the crystaline Martinex (played by Michael Rosenbaum), and the archer Yondu. Aliens of the 30th century, and each the last survivor of his home planet, they were all allied against the evil alien Badoon. The last member, a psychic hero named Major Victory, has actually proved to be a prototype for several different MCU characters, too. 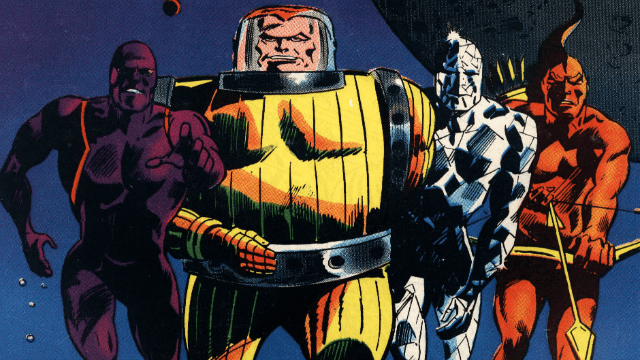 First, the Major is the team’s only human, the Earthly astronaut Vance Astro. Reawakened after a millennium in suspended animation, his role’s more or less the same everyman-audience-surrogate-in-a-universe-of-aliens that Star Lord now fills. He’s also the alternate future version of the New Warriors‘ teen hero Justice, who actually debuted in the pages of Defenders (demonstrating how complicated multiverses entangled plots pretty early into the history of Marvel). Later storylines would introduce more members, including Starhawk (now played by Stallone), Aleta (played Michelle Yeoh), Kruggar (the 30th century’s heir to Dr. Strange), and Mainframe (an A.I. evolved from the Vision, now voiced by Miley Cyrus). And through the device of time travel, these Guardians would team up with the Avengers many times over the years. Several even became honorary members.

Then came Annihilation, a 2006 crossover that revamped Marvel’s cosmic corners to be more “grounded” in contrast to the New Age-inspired stories of the 70s. To wit, the Guardians were re-imagined as a para-military organization policing the universe, and their ranks now included contemporary space characters; for the first time assembling Star Lord, Rocket Raccoon, Gamora, Groot, Drax, Mantis, Warlock, and Cosmo. Thus, while the GotG have been around for nearly 50 years, the version these movies are based on were only around for about eight prior to Vol. 1‘s premiere. And that flick made plenty of changes, too–probably more than any other MCU movie.

So, with Yondu being re-imagined as a space merc in the outlaw Ravagers, it only fits that his old comrades would be part of that outfit, too. Get it? James Gunn is already saying he’d like Starhawk’s team to return on-screen, too. Perhaps they’ll get their own spin-off movie, like the original GotG did after Annihilation, and it could also be titled Guardians 3000?

Has this deepened your appreciation of Vol. 2? Drop any more questions in the comments.