THE NIGHTMARE BEFORE CHRISTMAS to Celebrate 25th Anniversary with Live Show

Boys and girls of every age, wouldn’t you like to see something strange and amazing when The Nightmare Before Christmas celebrates its 25th anniversary this fall? Well, come with us to Hollywood and you will see something that will make everyone scream: a special live performance of the movie, starring  Danny Elfman as Jack Skellington.

In news we came across at io9, The Hollywood Bowl has announced they will once again host live-to-film performances of the classic holiday movie, with two special shows on October 26 and 27. “The immersive experience will include live scenery projections, live orchestra, spectacular guest artists,” as well as Catherine O’Hara (Sally) and Ken Page (Oogie Boogie) performing in-person with Elfman. 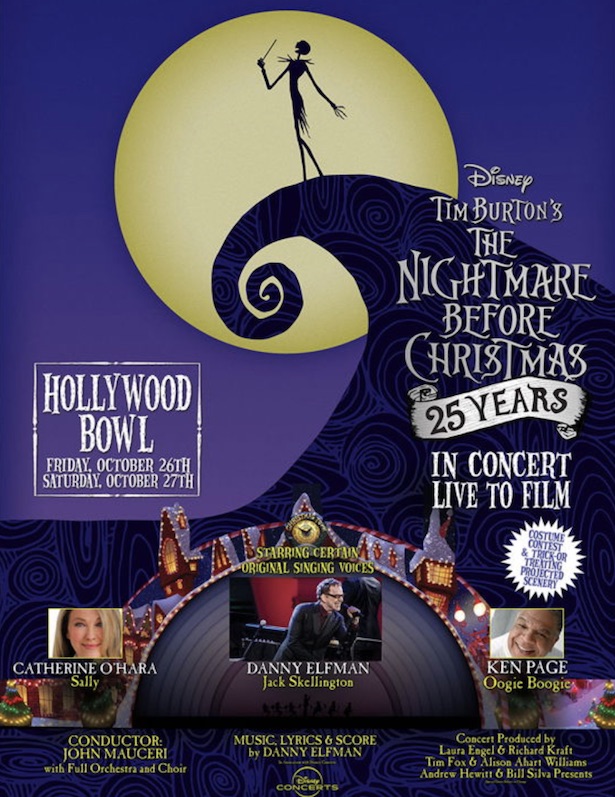 Fans will want to arrive early, as the venue will be transformed “into Halloween Town with special pre-show activities including an audience participation costume contest, unique photo opportunities and trick-or-treating stations.” They also say “Tim Burton-inspired costumes are encouraged,” so get your Beetlejuice and Edwards Scissorhands get-ups ready.

The Hollywood Bowl also hosted live performances of the movie in 2015 and 2016, but with this year marking 25 years since the film arrived in theaters, we have a feeling these will be the biggest shows yet. You can order tickets here.

Celebrating The Nightmare Before Christmas‘s 25th anniversary with a live performance a few days before the spookiest night of the year? Now this is Halloween, but fittingly it also feels like an early Christmas present.

What song from the movie do you most want to hear live? What’s this? A comments section below. Tell us! We really want to know.

TAGGED: The Nightmare Before Christmas