It’s a bit of a cliché, but the best games are the ones where you play the players, not the game. If a game is about bare mechanics or even a great sword-swinging setting, you’ll eventually explore it entirely. But when it’s more about reading and reacting to others, then every experience brings something novel to you.

There are lots of titles that at least touch on this aspect of gaming. Negotiation games inherently revolve around convincing others to make decisions that benefit you. But my favorites are where it isn’t just about mutual benefit, but where you can also get your opponents to do your dirty work for you. And it’s even better when there isn’t any alliance (formal or informal); instead you merely manipulate your opponents’ incentives to align with yours.

It sounds mean, and sometimes it can be. And that’s true even in a game like Little Prince: Make Me a Planet. Wait, what? How can a game, based on a beloved French children’s book be filled with spite and antipathy? There’s hardly any aggression in the source material! And yet, give the title to a group of gamers and you’ll see the knives come out.

Each round, a player flips over a number of tiles (one per player) and then players select one each. After the first person picks one, he then picks who goes next. The last player gets whatever is left over, but gets to go first in the next round of tiles.

But the tiles can be worth very different things to different people. Maybe of the two tiles left, there’s one that gives a bunch of points to player A but relatively little to player B. Maybe the other has a tree (getting three trees is bad) that would do nothing to player A, but hurt player B. If I let A go first, he takes the tile worth a bunch of points, and player B gets stuck with the tree. But if I pick player B, he takes the not-tree tile and now A gets no points. Then he gets the tree. So by manipulating who goes first, I made it so neither of them benefited. In fact, the danger of trees is increased for A and still present for B.

Another example is maybe a tile is worth a ton of points to A and a few points to B. The remaining tile isn’t worth much to either of them. So I let B go next. He’ll take the tile worth points and, again, deprive A.  So I hold both of my opponents to as few points as possible.  And I can say, “Hey, I didn’t take that tile from you, A. That was that dastardly B who did that to you.” Internally, I’m cackling.

And that’s just the tip of the iceberg. There are all kinds of combinations and point opportunities that can change up which tiles someone wants and why. Reading into those and denying them to opponents is crucial. 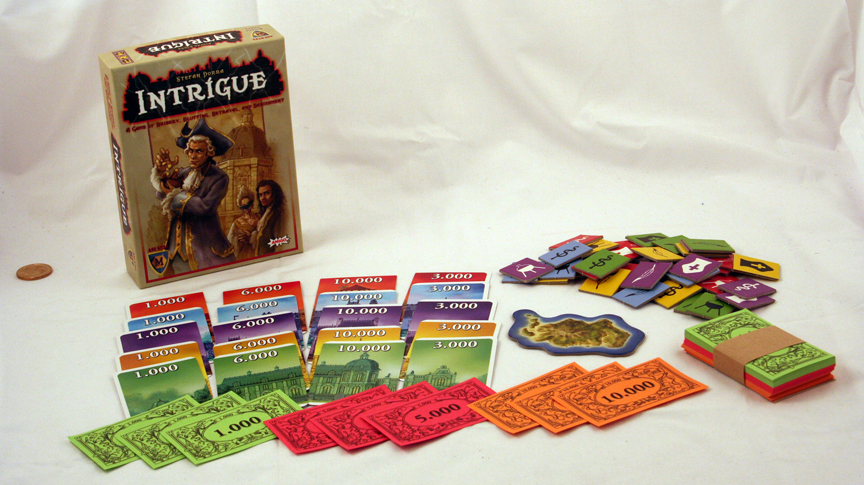 Little Prince is a great example because you wouldn’t expect it to be so cruel. But at its core, it’s about manipulating the incentives of other players to act as you would want them to. Intrigue, which is all about lying and bribery, is more in-your-face. It similarly requires you to make choices based on what you think your opponents are likely to do. In that game, I will sometimes refuse to give a bribe if it’s clearly in my opponent’s best interest to accept my offer over someone else’s. Knowing when you can get away with that, and when you can’t, is crucial.

Train games, too, seem to specialize in manipulation of incentives and playing with the motives of your opponents. An easy one to learn, and relatively short to play, is Chicago Express (previously titled Wabash Cannonball). As players buy stocks in the various companies, natural alliances start to take place. And, thereafter, other players can manipulate or break those alliances simply by shifting the stock balance.

Little Prince is easy to learn, and the theme should be disarming. But don’t expect it to be a walk in the park amidst a beloved childhood story. Players should go in knowing that they will be doing their best to make sure opponents get the most harmful tiles possible.

What are your favorite games for manipulating opponents?