The Mystery and Magic Behind Ray Fury's KINGDOM Series - Nerdist

The Mystery and Magic Behind Ray Fury’s KINGDOM Series

I’m kind of obsessed with Raw Fury’s Kingdom series. The latest game, Kingdom Two Crowns just released and I’ve already lost an embarrassing amount of hours to it. These micro-strategy, pixel-art games are simplistic in playstyle, yet strategic and challenging and I CAN’T seem to stop playing. This fact is truly bizarre since most of the games are rogue-likes, a particular genre of game where death is permanent and often there is no end and I am NOT a fan of these kinds of games. So what is it that keeps drawing me back like a moth to a pixelated flame? 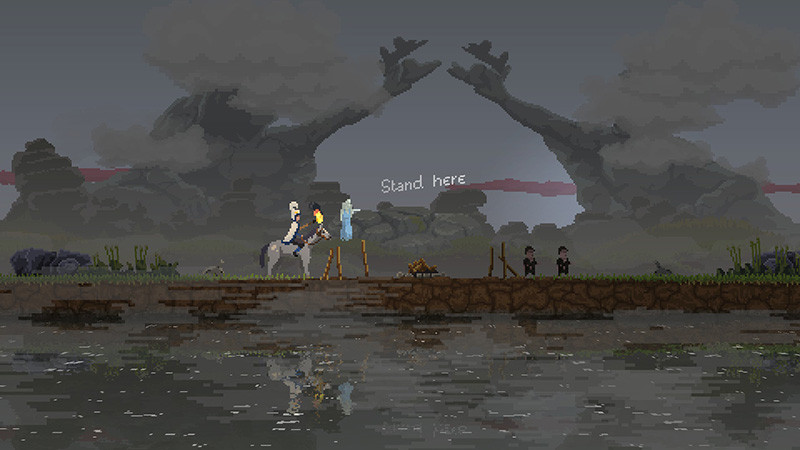 Like I said, the original Kingdom and its sequel, Kingdom: New Lands, are rogue-likes. You play as the monarch of a land that has seen some rough days. Your people are beggars and your city is nothing but a campfire, but you can work with this. You pay your few followers to work as builders or archers and start constructing walls to keep you safe. The night is long and dark and there are creatures which scurry within the shadows; doing their best to bring about your downfall. The main aim of Kingdom games is to see how long you can survive the onslaughts of these creatures known only as the Greed, before they burst through your defenses and steal away your crown.

Playing the game is simple. You move left or right and can throw money. That’s it. As a monarch, your only method of interaction with the world is to toss gold coins. Back and forth, coin purse in hand, there is nothing I’ve described so far that could explain why the game is as compelling as it is, right? Well for me, the essence of the lure is the mystery of it all. The game only tells you the bare essentials (how to move, build, and hire), but there are a lot of clues to found that hint a deeper story. These tidbits of information keep me asking questions and playing along to see ifI can discover any answers.

For instance, when you first start the game you meet a ghostly figure who leads you to your camp. Who is this ghost? Well as soon as you die the first time and start again, the ghost seems to be of your old character, so it seems to suggest that the first ghost was a previous ruler. There are some online theories that suggest more to the story however. As you run yourself back and forth, growing your Kingdom, you’ll eventually come across a particular armored horse  that stands in the middle of a battlefield. Perhaps this past king or queen did not perish at the hands of the Greed, but instead to an invading army? Who were they? What happened? These questions feed into another interesting theory which might be answered by discovering more about the Greed.

What are the Greed? These strange goblin-like creatures enter our Kingdom via portals and their goals see to be to steal anything of value; coins, important people, and your precious, precious crown. You can kill greedlings and close their portals, but eventually, they always find their way back.

The newest installment in the series, Kingdom Two Crowns, changes things up by allowing you to finally defeat the Greed once and for all, but even in your victory you never learn much more about these sticky-fingered creatures. My running theory is that there was once two kingdoms and, in their lust for power and resources, they waged a bitter war against each other. Ultimately all involved were either slain or became penniless wanderers, leaving behind the battlefield mentioned above. The spirits of the dead were transformed by their greed into monsters and inhabit an alternate realm; something akin to the Treasure Goblins of Blizzard’s Diablo series. Always wanting, always waiting for nightfall so that they might prey those that survived… or maybe they’re just creepy little goobers who like shinys. Who can say?

One more question to ponder: What are the statues? In the woods reside statues filled with magic that can make your walls stronger, your soldiers more effective, and make your crops more bountiful. Some fans believe these were built by a previous monarch and are representations of the gods of the land. Each bringing for a blessing when you sacrifice your only resource, gold. There is one statue though that leaves me wondering. On the last island of the 2nd game, appropriately known as Skull Island, sits a statue holding an hourglass. Sand pours forth from the glass and, if you don’t continually sacrifice to it, the sand will eventually run out and you will lose. Is the statue of an angered god? Is it cursed? I crave knowledge of these things!

Many of my questions, oh heck probably all of them, will never be answered, but the open nature of the story lets me come up with my own ideas about the lore of Kingdom. As long as Raw Fury keeps the mini-mysteries coming, I’ll keep running to and fro throwing gold coins like Bioshock Infinite’s Elizabeth. Now I feel compelled to yell “Booker catch!” as I play.

These are just a few questions and theories, but there are plenty more to discover in the series. Are there games with questions that make you crave more? Let us know in the comments below and be sure to tune into Game Engine on Twitch and Alpha for more video game goodness every Tuesday starting at 4PM PT.