Bo-Katan Kryze wanted to find Moff Gideon so she could reclaim the Darksaber, the legendary weapon that can unite her people and make her ruler of Mandalore. Unfortunately in The Mandalorian‘s season two finale, Din Djarin inadvertently ruined her plans when he bested Gideon in single combat and picked up the saber. He wanted nothing to do with it, but Bo-Katan refused to accept it. However, she made a very different choice when presented with the same option years earlier. She took the Darksaber when another Mandalorian offered it to her.

Why the reluctance this time? Because her own story and the story of Mandalore are very different now. Merely taking the Darksaber won’t give her the power she needs to rule. And that leaves her facing a difficult choice. 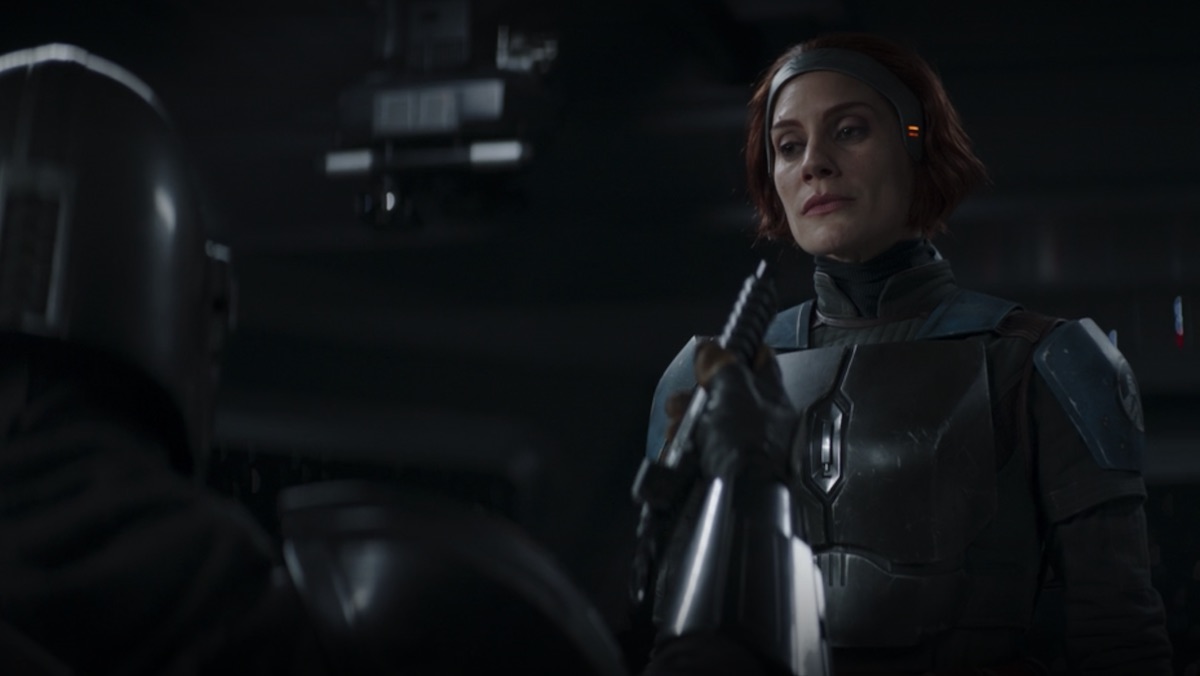 The history of the Darksaber is long. You can learn more about it with our primer on the iconic weapon. But its history with Bo-Katan started shortly before A New Hope, with another Mandalorian, Sabine Wren of Star Wars Rebels. She found the saber on the planet Dathomir, where Darth Maul kept it. Sabine took it from him. She did not earn it the traditional way—the way Maul himself had—by defeating its owner.

Sabine was reluctant to use the sword, which can unite all Mandalorians under a single ruler. And though she eventually did train with the Darksaber, Sabine did not think she could or should rule herself. She wanted Bo-Katan to have it. 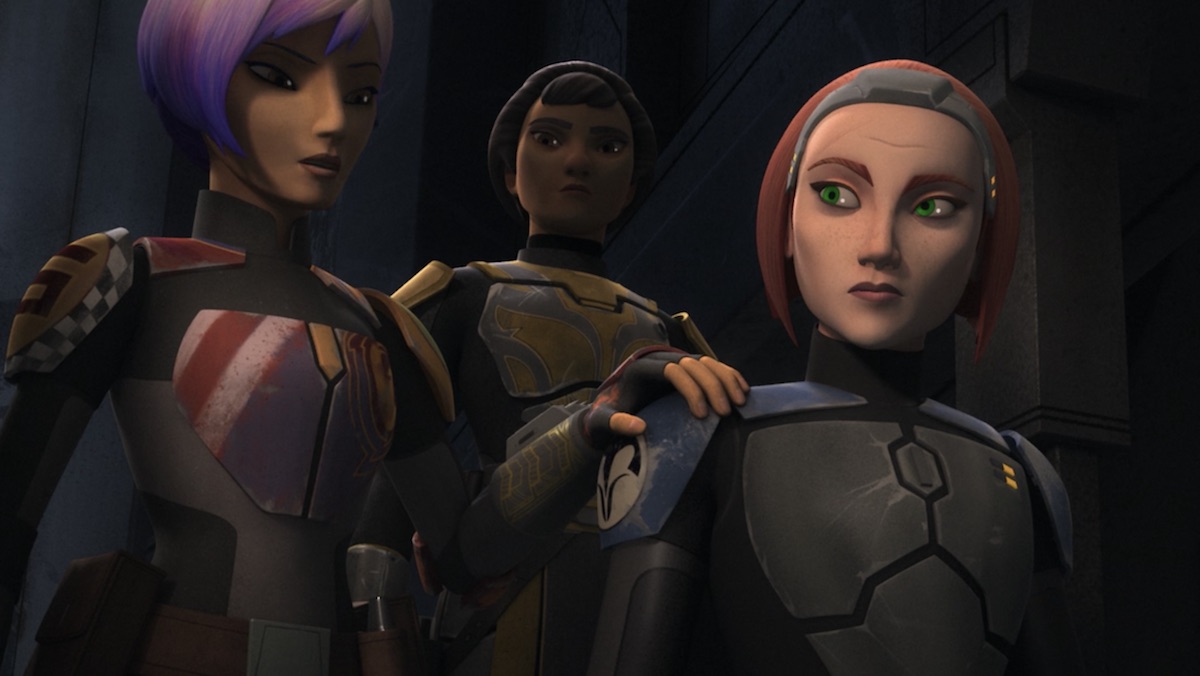 At first Bo-Katan refused, in part because she had once led Mandalore—towards the end of the Clone Wars—only to lose her home world to the Empire and a clan who swore allegiance to Palpatine. She didn’t trust herself to take on the mantle as Mandalore’s ruler again.

But that changed after the two joined a dangerous mission. They helped destroy a machine that specifically targeted and destroyed beskar steel, the nearly impenetrable, sacred metal Mandalorians use for their armor. When the triumphant group returned to Mandalore, Sabine offered Bo-Katan the Darksaber once more. At first she still didn’t take it. But when their ship’s doors opened, Mandalorians from every clan told Bo-Katan they were with her. They wanted her as their leader. Only then did she accept the Darksaber and her former position as ruler of Mandalore. 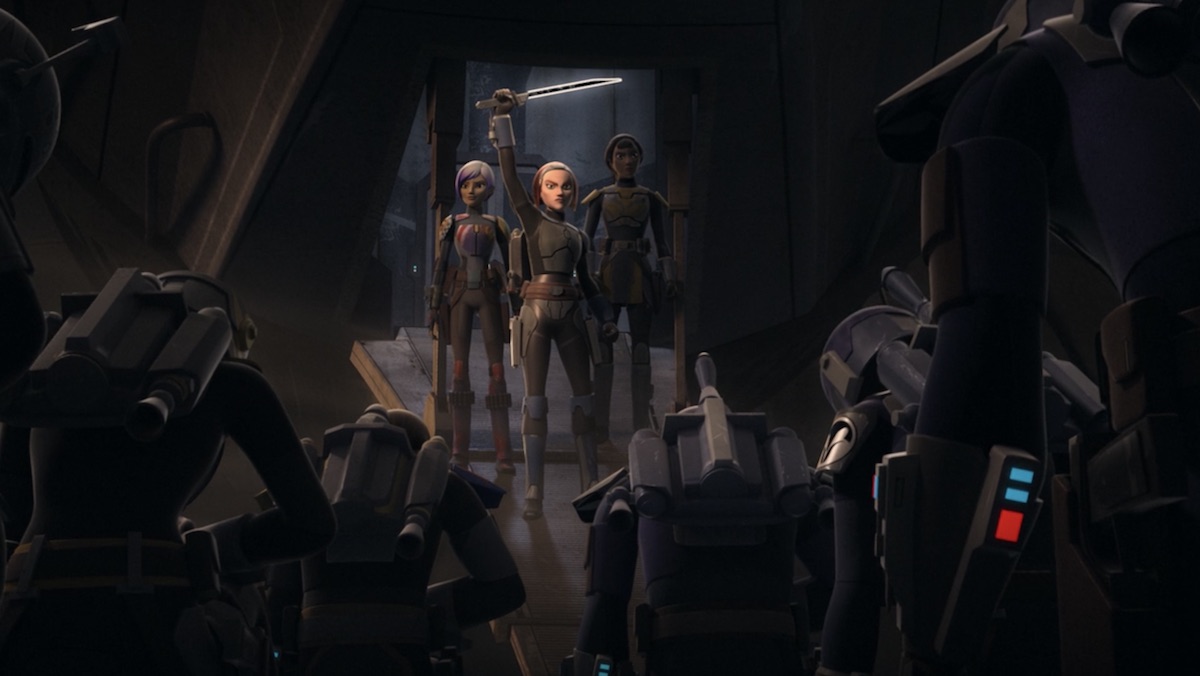 Something terrible happened after that. The remnants of the Empire, unable to hold the planet, made it so no one could rule there, possibly as part Palpatine’s posthumous Operation: Cinder. Din describes the planet now as being “cursed.”  At some point Mandalore was also victim of “The Great Purge,” when the Empire stole beskar and other assets. Ultimately—though we don’t know for sure how—Moff Gideon ended up with the Darksaber. Meanwhile, Bo-Katan and all other Mandalorians scattered into hiding throughout the galaxy.

Winning it back from him in battle was her way to bring all of her people home. That’s the only thing she cares about. Bo-Katan isn’t interested in ruling for her own glory. Her concern is for Mandalore and her people. Regaining the Darksaber was merely her path to uniting them. 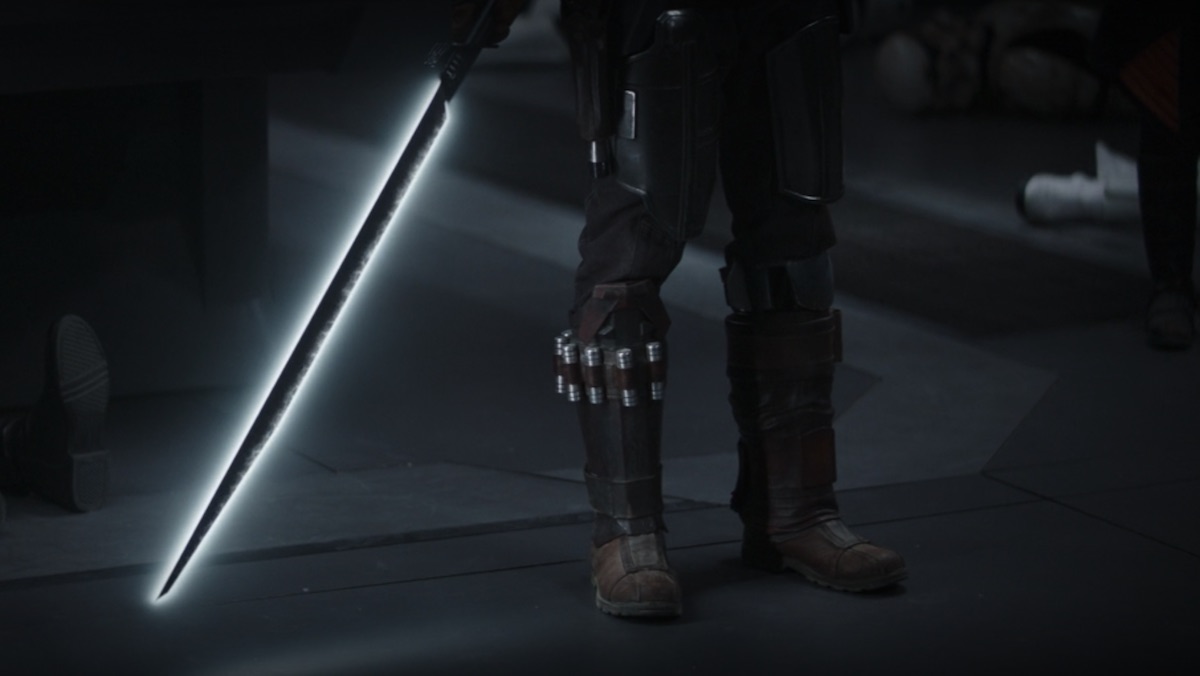 Only she can’t take it from Din Djarin the way she took it from Sabine Wren. As a gleeful Moff Gideon said, “The Darksaber doesn’t have power. The story does.” Bo-Katan only took the famed weapon after her suddenly united people vowed allegiance to her after she helped save them from total destruction. It was a powerful moment that made for an equally powerful story.

But what’s her story now? The Darksaber was almost certainly stolen from her. (She would have died before letting Gideon take it.) That’s far less honorable than losing in battle. And, for the second time, she failed to protect her home as its ruler. To now have another Mandalorian, a man who has never even stepped foot on Mandalore, win the Darksaber for her—-Sabine didn’t win it either, so it wasn’t a problem then—is even worse. Taking it from him would make her look weak, because there’s no power in that story. And yet, “without the blade she’s a pretender to the throne.” 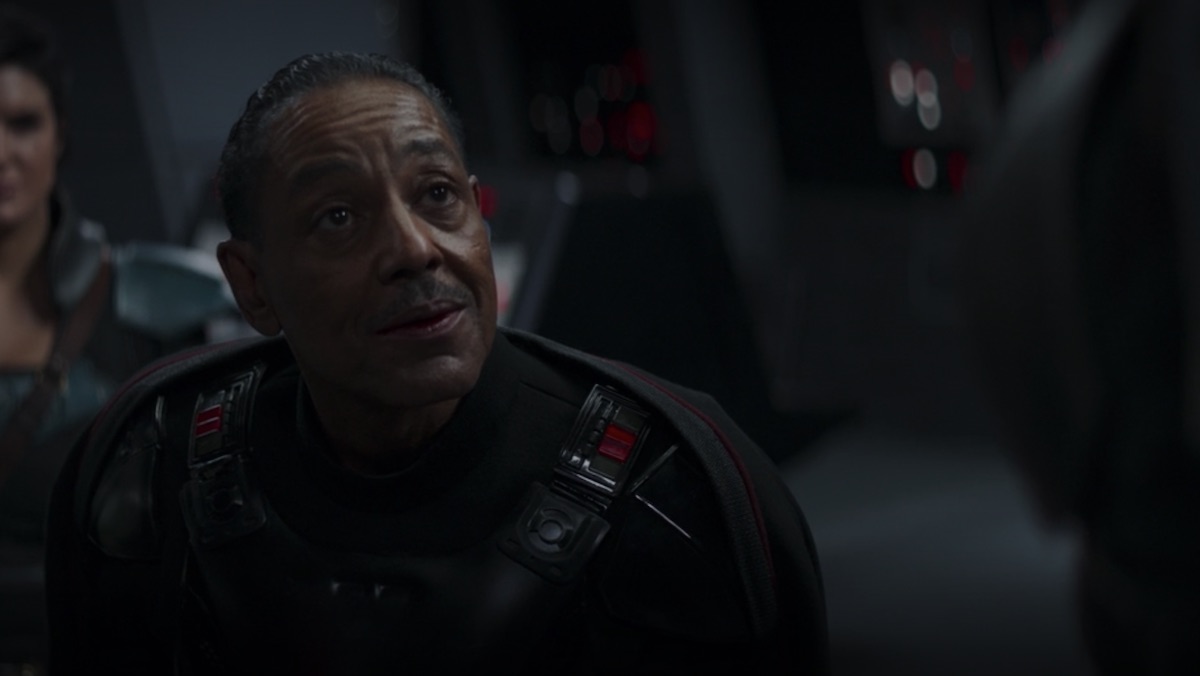 Now she faces a terrible choice: fight Din for the Darksaber or give up her chances to rule. Bo-Katan has never been afraid of death. She’s taken on seemingly impossible missions before without fear or reservation. Din’s skills as a warrior wouldn’t stop her. But killing a fellow Mandalorian who has fought with her might. Especially one who doesn’t want the Darksaber in the first place. He already yielded to her.

But that still might be a better option than potentially leaving the fate of Mandalore to a man who has never been there and isn’t sure it’s worth fighting for. Should the Darksaber really reside with a loner and religious fanatic who has no interest in uniting all his people? 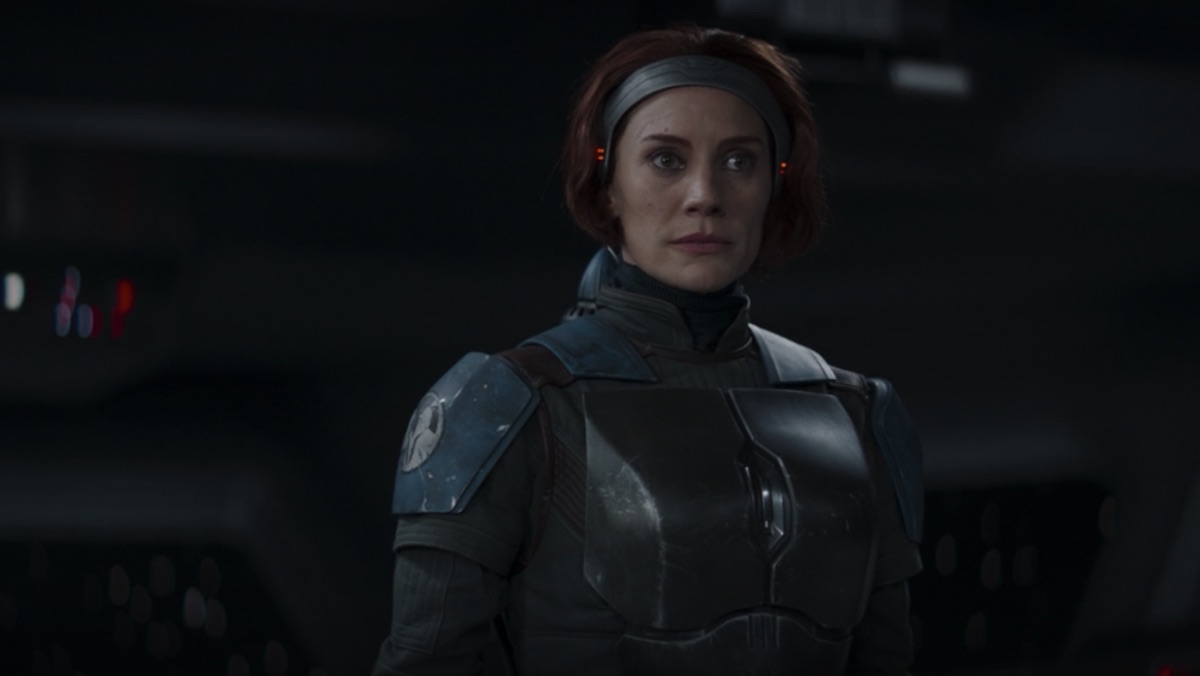 It’s a seemingly impossible decision for someone who has spent her life fighting for her people. Especially for a woman who knows firsthand how civil war left Mandalore vulnerable to outsiders. But that’s also why she might have to look for a different choice.

Din Djarin is a foundling who lives by the ancient creed of his people, a warrior who stood up to the Empire. He has both the Darksaber and a powerful story—and he might be the Mandalorian who unites all of his people and saves their home world.

If only Bo-Katan can convince him he should lead them.