If your patience is understandably thin these days, then let’s make one thing perfectly clear: The Last of Us Part II is a modern-day masterpiece, a haunting and beautiful story that will grab hold of something deep inside of you until long after the credits roll. Not only is it a worthy successor to the original, but it’s one of the finest sequels I’ve played. The hype is real. It’s that good.

That’s the short review. Here’s a slightly longer one if you’re into that sort of thing. While I will endeavor to avoid any and all spoilers, please proceed at your own peril because lord only knows what people consider to be a spoiler nowadays.

Following up a critically acclaimed game like The Last of Us is no easy task. When you consider that for many gamers—myself included—it ranks highly on the Best Games of All Time list, making a sequel begins to feel downright Sisyphean. But the developers and storytellers at Naughty Dog are used to the crushing weight of lofty expectations, and once again they have made something truly special. It not only stands on its own but enhances the original work too. Impeccable gameplay, gripping storytelling, astonishing graphics, and fastidious attention to detail make this one of the defining works of the PlayStation 4 era. One of the biggest reasons, though, is that Naughty Dog uses The Last of Us Part II to explore deeply human experiences and push them to their logical and emotional extremes.

Grief is a paradox, simultaneously a powerful, catalyzing force for change and stasis. It sinks deep into your body, wrapping its icy claws around your heart, alternately numbing you to the world around you and tearing your soul asunder as you try to grapple with your new reality. Sometimes it causes us to retreat inwards, withdrawing from our loved ones as we lumber around like a depression golem, merely drifting from moment to moment.

Other times it fills us with righteous anger, which can take the form of a perfectly crafted invective against someone like LAPD chief Michael Moore. But worst of all is when that grief fills you with the kind of unbridled rage that seemingly can’t be quelled by anything other than violence. The Last of Us Part II plumbs the depths of this particular raw emotional state—that inescapable feeling of seeing red—better than any other piece of media I have encountered. 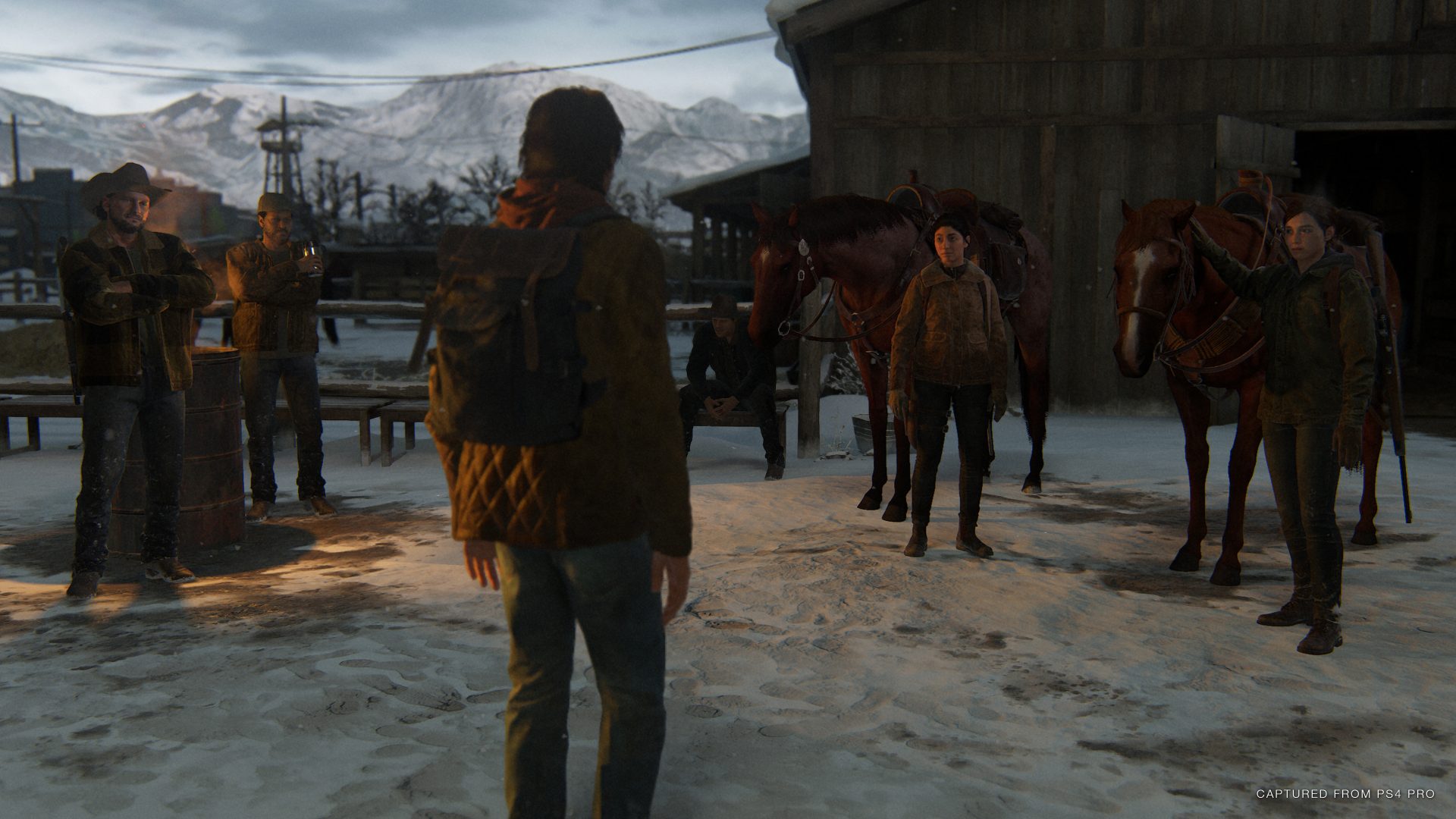 As I learned last September when my father passed away, you cannot control when these feelings strike you, and I found myself reacting viscerally to the beautiful, tragic, and harrowing saga of Ellie and Joel in The Last of Us Part II. Multiple moments in this staggeringly good game reduced me to a weepy pile of tears on my couch. Not only because of its poignant, frequently shocking narrative, but because of the elemental experience to which it speaks. Whereas the original The Last of Us dissected the morality of unconditional love and the incredible lengths we would go to for our friends and family, The Last of Us Part II asks what lengths we’re willing to go to for hate, anger, and revenge. This is a story of unconditional hate and the consequences of allows it to consume us.

“I want to talk about this idea of rage and anger and hate, and how close it can be actually to love,” said co-director Neil Druckmann during a hands-on preview event last September. “What happens if something bad happens to someone you love? A significant other, a family member, a best friend … How far would you go to make the people responsible for that [pay]? What are the costs of that? What are the costs of an eye for an eye?”

“a haunting and beautiful story that will grab hold of something deep inside of you until long after the credits roll.”

That was two weeks after my father passed away and Druckmann’s words really sunk in. I found myself thinking about them often in the days and weeks that followed, but especially so as I played through The Last of Us Part II‘s twisting, turning, non-linear narrative. While the primary events of Part II take place over roughly a three-day span of time, the game often jumps back and forward in time, giving you fresh insights and perspectives from unexpected characters that give previous moments new meaning and profound resonance. It’s a bold experiment that could derail a game without as clear-eyed a vision as Naughty Dog’s, but it manages to keep you on tenterhooks even when you feel like you know what is coming. 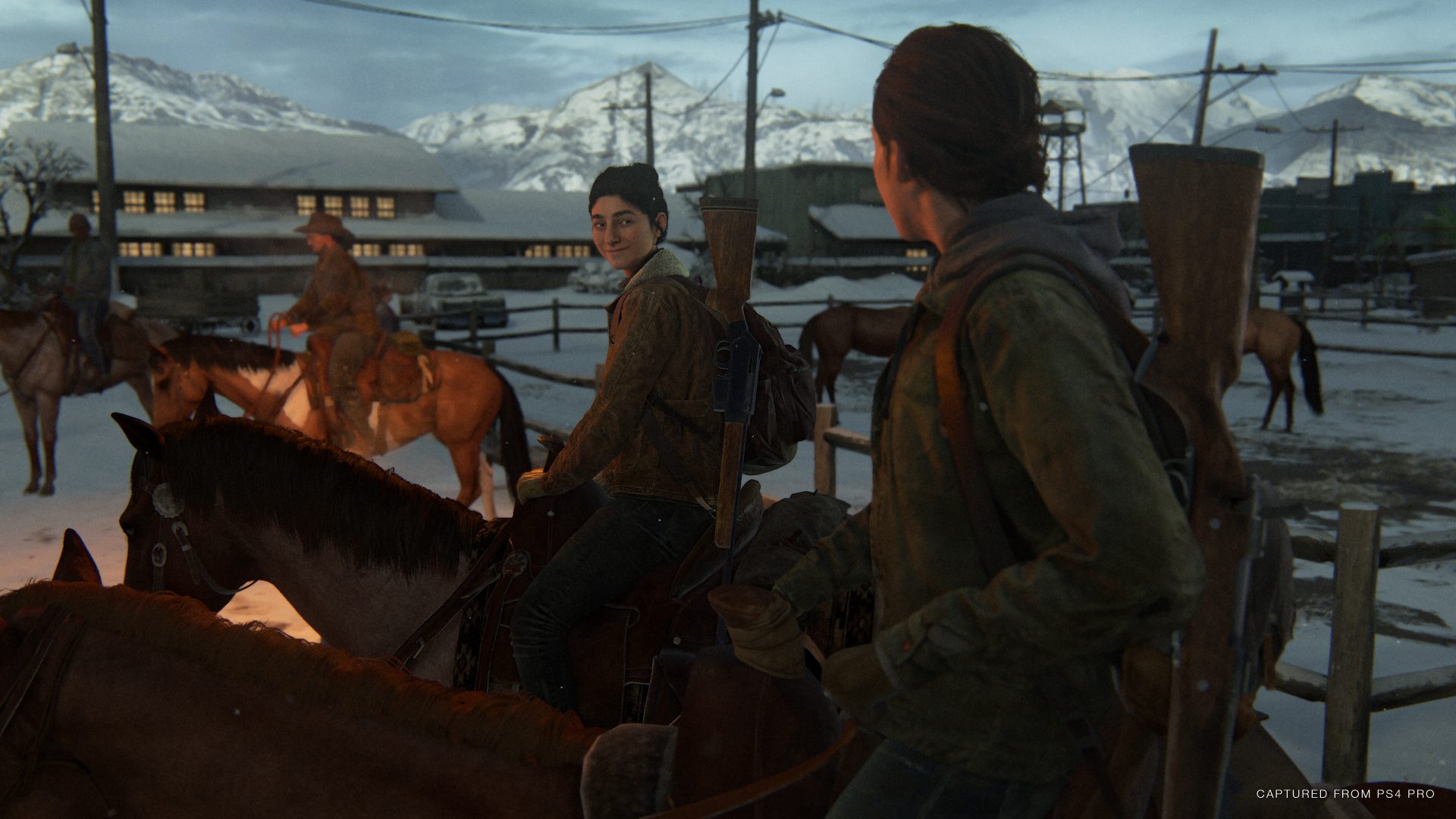 Set 25 years after Infection Day, Ellie (Ashley Johnson) is no longer a child. After Joel (Troy Baker) and she survived endless horrors in the first game, Ellie, now 19 years old, has achieved something resembling normalcy in a world where a fungal infection ravaged the planet, turning much of humanity into blood-thirsty, mutated monsters. Living in a bustling community of survivors in Jackson County, Colorado, Ellie and Joel have drifted apart in the way that many teenagers do from their parents as they try to carve out an identity for themselves. New friends like Jesse (Stephen A. Chang) and Dina (Shannon Woodward)—as well as mentions of others in Ellie’s journal—paint a picture of a life that is full of potential, a flower blooming in the ruins of the old world.

But all of that potential and hope is obliterated when the unthinkable happens. An unspeakable act of violence irrevocably changes the course of Ellie’s life and sets her on a course towards Seattle where she seeks vengeance and winds up embroiled in a much larger conflict between a radical paramilitary group and a mysterious cult. What follows fundamentally changes Ellie as we see the emotional, spiritual, and physical toll it takes on her over the course of her brutal, relentless odyssey into the heart of darkness.

That isn’t to say that The Last of Us Part II is a hopeless game. Quite the opposite, in fact, as the game has quite a bit to say about what we do in our darkest moments and the impulses to which we succumb. Despite these pervasive moments of despair, there is a light at the end of the tunnel and a cause for serious introspection as you, the player, must guide Ellie along this precipice of self-destruction. 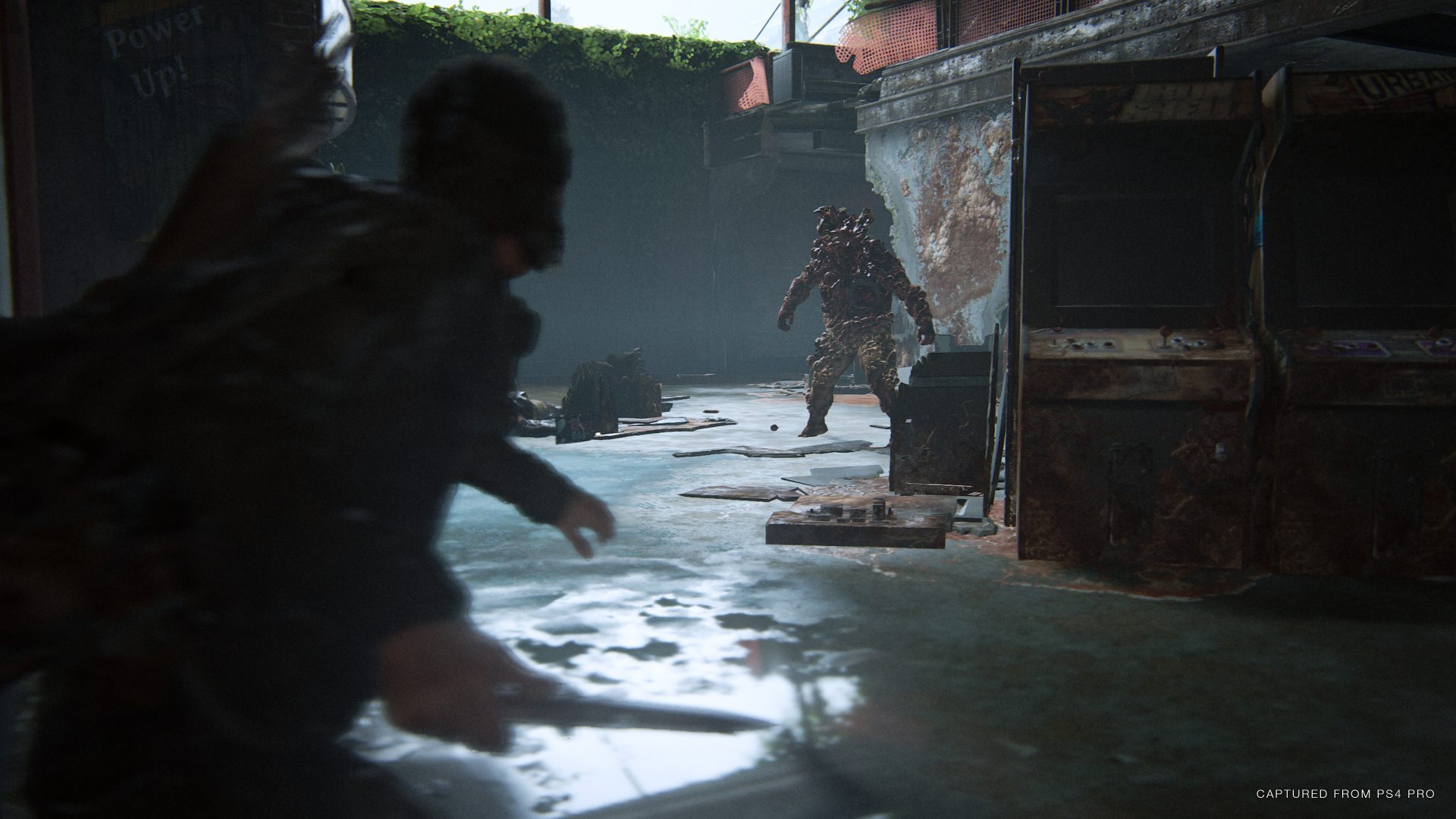 The Last of Us Part II, much like its predecessor, deftly darts back and forth between action-adventure and survival horror as you navigate the world’s many horrors, both human and monstrous. The game’s vastly improved AI and new enemy types—like guard dogs, which track your scent, and fleshy abominations like the Shambler, which spew clouds of noxious, sight-obscuring smoke—will keep you constantly on your toes and your pulse racing as you survive another encounter by the skin of your teeth. But where the game truly shines is in the details, the seamless and almost invisible ways in which Naughty Dog creates a living, breathing ruined world.

From the haunting sound design of Clickers blindly screaming in the distance to the crunch of snow beneath your feet, from the way light diffuses through the trees of a lush forest to the apocalyptic glare of a raging inferno, from the 60+ accessibility options to make this experience available to as wide a range of people as possible to the endless little collectibles and discoveries waiting around every corner, from the abandoned game of Dungeons & Dragons in a dilapidated apartment to the silly dad jokes Ellie cracks along the way to lighten the mood, The Last of Us is a towering achievement. 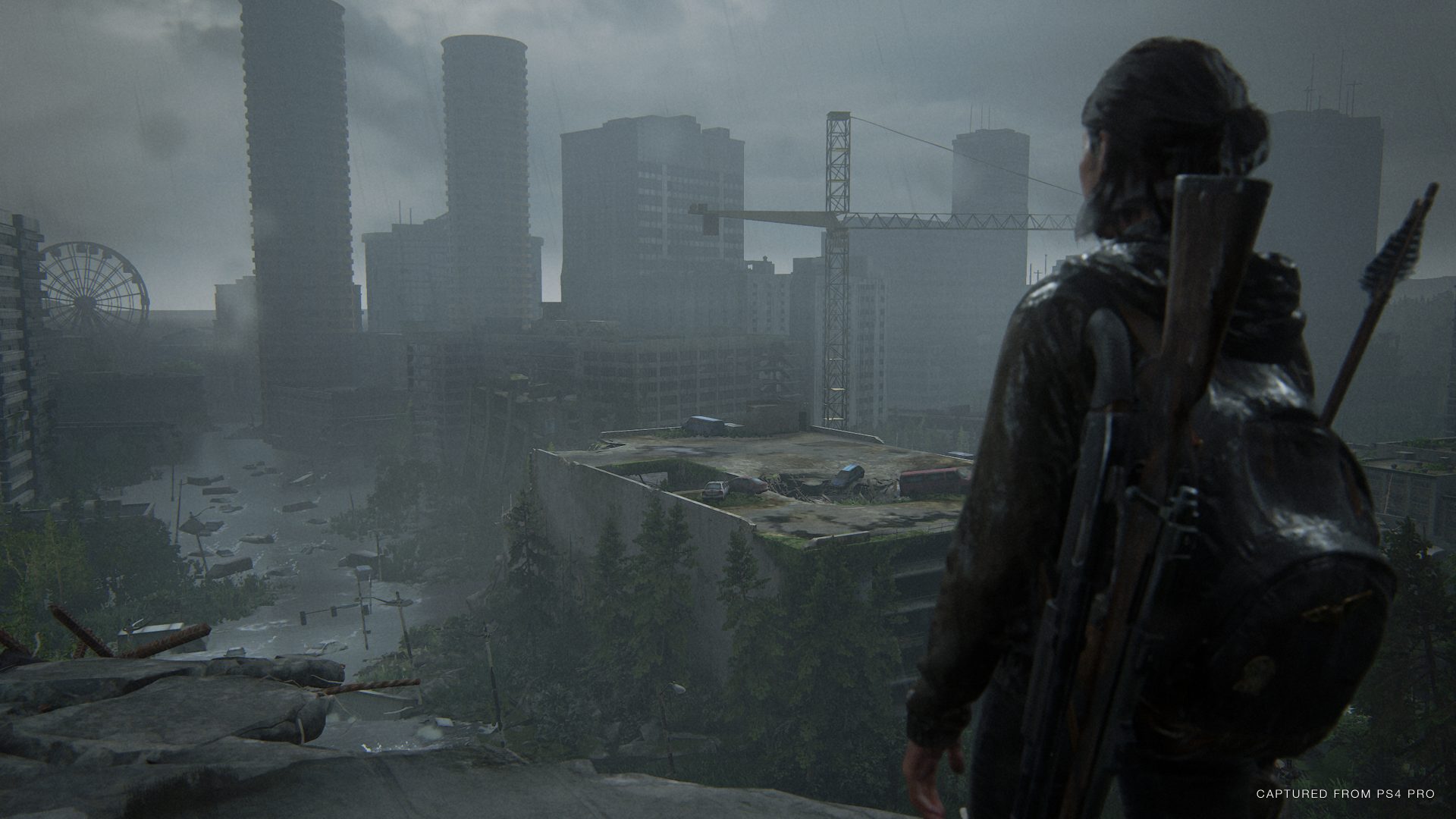 This is, of course, to say nothing of the incredible performances not only returning favorites like Ashley Johnson as Ellie and Troy Baker as Joel, but series newcomers Shannon Woodward as Dina, Stephen A. Chang as Jesse, Laura Bailey as Abby, and Patrick Fugit as Owen, whose performances are as good if not better than what you’d see in any prestige TV series. There’s so much more I want to say about this game, especially about Laura Bailey’s performance as Abby, but this is a journey best taken unspoiled.

The Last of Us Part II, by its director’s own admission, is not for everyone. You may not like it as much as I did. It may not make you cry as it made me. And you may not be as consistently awestruck over the course of its journey. But I urge you to give it a chance because if nothing else, you will appreciate how much love, care, and incredible craftsmanship went into making. And just know that I am jealous of you because to play this game for the first time is a gift in and of itself.

Dan Casey is the creative director of Nerdist and the author of books about the Avengers and Star Wars. Talk to him on Twitter about video games