The International Exhibition of Sherlock Holmes is More than Elementary - Nerdist

The International Exhibition of Sherlock Holmes is More than Elementary

When I first found out about The International Exhibition of Sherlock Holmes, I couldn’t wait to check it out. First of all, I love Sherlock Holmes and second of all, I love solving crimes. I wasn’t sure what to expect as I took the train down to the Discovery Cube in Santa Ana, California, where the exhibit current lives before it continues its travels throughout North America and internationally.

The exhibit itself is the product of a partnership between several organizations including the Museum of London and the Conan Doyle Estate. The focus of the exhibition is the interdisciplinary methods of Holmes and how science plays a part in his detective work.

As you enter the exhibit, Arthur Conan Doyle’s great nephew welcomes you into his Uncle’s study — an area surrounded by displays of first editions and manuscripts on loan from the Museum of London. This look into Conan Doyle demonstrated the scientific influences that went into creating the character of Sherlock Holmes.

Did you know? The character of Sherlock Holmes first appeared in short stories in the newspaper before the full-length novels were written and published.

Grab your detective’s notebook and step back into the 1800s. I was able to learn more about the technology and science used in the time of Sherlock Holmes and how it impacted authorities’ abilities to solve crimes. For example, in that time bodies were often quickly removed from the street or other public areas with no concern for preserving the crime scene.

Did you know? Once cameras were invented, police were able to take photos to preserve the scene and still quickly remove the bodies. 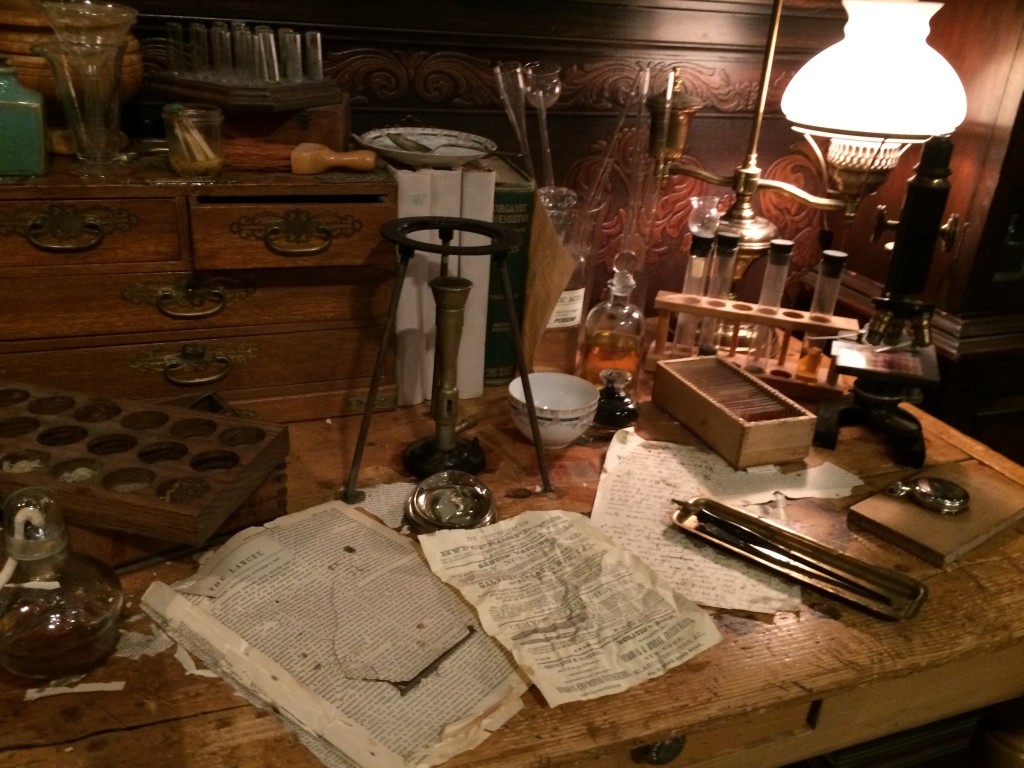 Next stop, jump into a eerily accurate recreation of 221B Baker Street. Sherlock fans will feel as if they’re right at home while examining everything from the famous detective’s hats to his messy newspaper collection. There’s even a bear-skinned rug with the head still on it.

Did you know? Experts visited the recreated 221B Baker Street and went through with copies of various Sherlock Holmes stories to make sure everything was accurate. 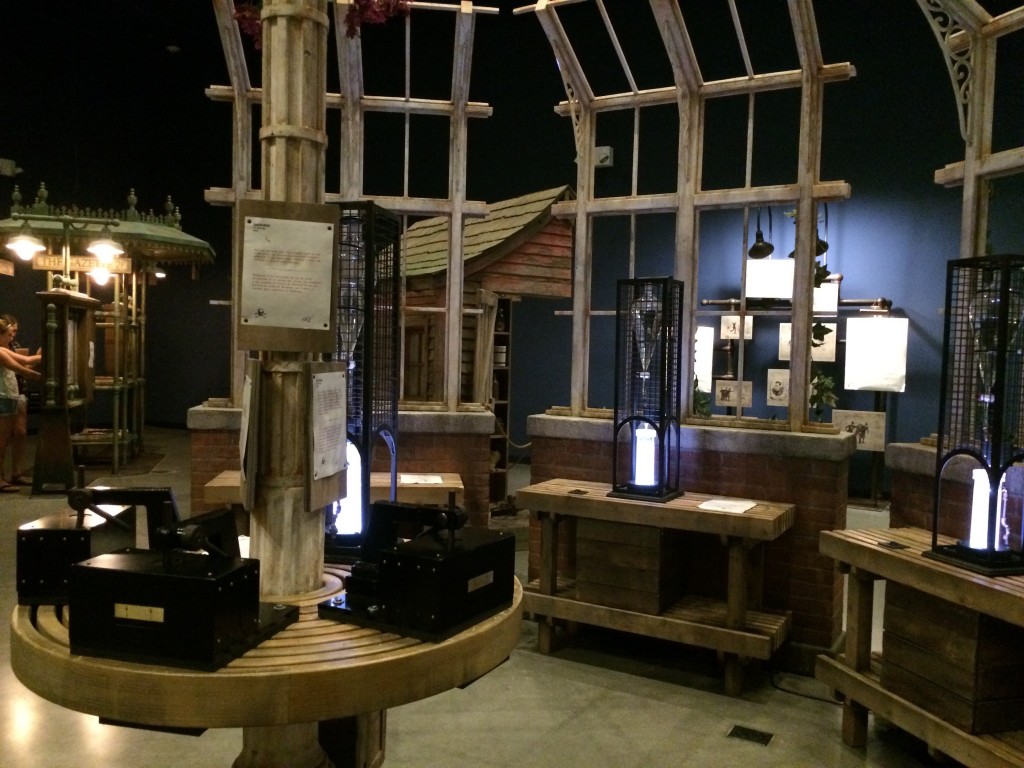 Now, onto the main event. I love solving mysteries, so as I entered the Crime Scene portion of the exhibit, not even the blood splatter could deter me. Using the detective notebook, I examined the crime scene for clues. What was the bullet’s trajectory? Are those footprints escaping the scene? Each station surrounding the scene allows for detectives to discover the science behind the forensics.

Did you know? Sherlock Holmes used to send secret messages through newspaper postings.

Once I made it through the crime scene and managed to choose the correct blood splatter, possible poisonous plant and escape method, I used a newspaper to decipher the final clue and piece together what happened. Luckily, I managed to keep an innocent man from going to prison. All in a day’s work!

Did you know? A completely unique Sherlock Holmes plot was created especially for the exhibit. But don’t worry, the experts help put it together! 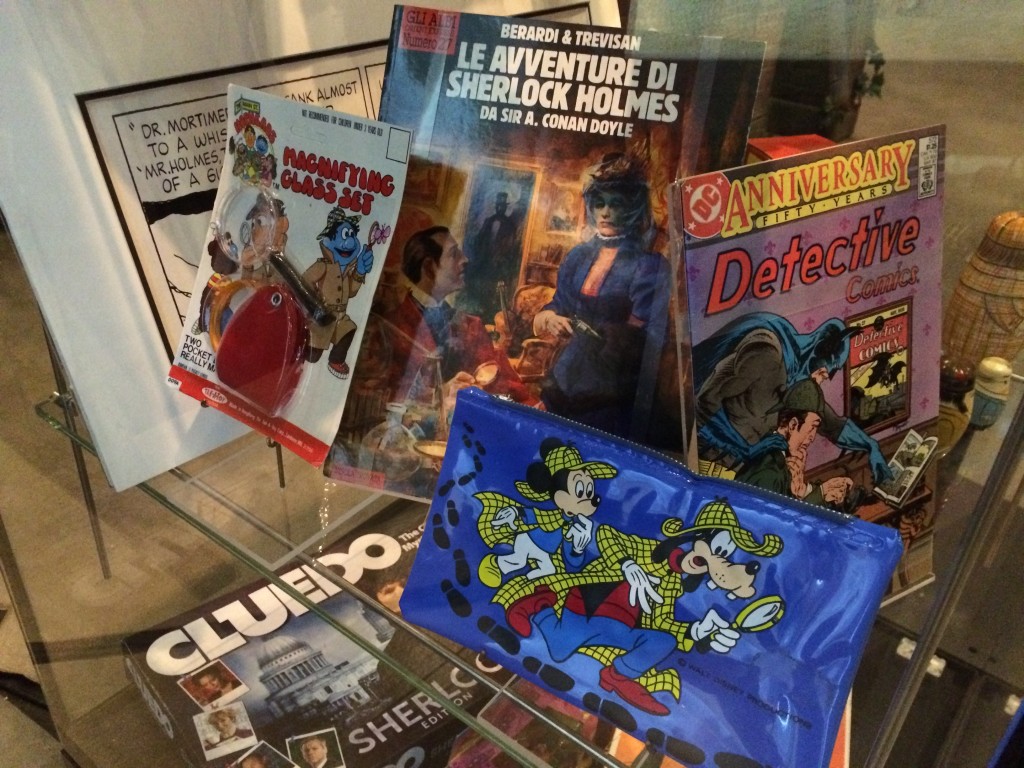 The exhibit ends with a shrine to the cultural influence of Sherlock Holmes. From movie posters to memorabilia to props from the actual shows (like the pink suitcase from BBC’s Sherlock), Sherlock Holmes has clearly made an impact.

Did you know? Many of the props for very early Sherlock Holmes movies were loaners and were returned afterwards. Only a dozen or so remain — five are in the exhibit.

Visit sherlockholmesexhibition.com to see when the exhibition will be in a city near you.