Pop quiz: name a drop-dead gorgeous model that you’ve seen on the cover of a magazine. If you happened to name a human of conventional beauty standards and didn’t think of Zuggtmoy, that’s ok. The last time you might have seen her, she looked like a puffball (no, that’s not a euphemism.)  As it turns out, time has been really, really good to Zuggtmoy. She got some work done, lost some baby weight, and ended up gracing the cover of an issue of Dragon+. Unlike runway models, she’s not conventionally beautiful, since she’s still the grotesque stuff of nightmares, and her current depicted manifestation in sculpted miniature form is explored in the featured Dungeon Life video. 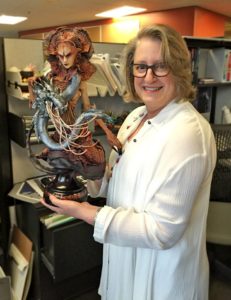 If you’re not already familiar, Zuggtmoy is an incredibly interesting character with a long and storied history within the D&D universe. She’s a Demon Lord who rules over the 222nd Layer of the Abyss; a plane of existence in the worlds of D&D. She was initially imprisoned in the Temple of Elemental Evil and one of the possible results of that campaign was to release her from her imprisonment. While she was imprisoned on the mortal realms, Juiblex an ooze-like Demon Lord, conquered great swathes of the 222nd Layer of the Abyss, and since that time she has yet to gain the power required to expel him from her realm.  (Also, what is it like walking around an entire plane of torment that is equal parts ooze and fungus? Squishy?)

Like most Demon Lords, cults of mortals spring up to worship her and offer sacrifices in her name. When worshipped, the most common symbol used is a jawless human skull with fungi blooming from within. As she is a Demon Lord of Fungi, it is common for ceremonies and worship from her cults to revolve around poisoning sacrifices with fungal based toxins. 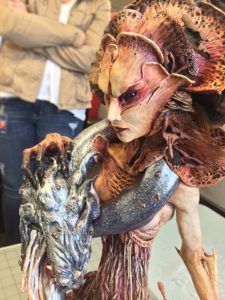 Zuggtmoy’s initial creation can be traced back to the late 1970’s when Gary Gygax himself was creating his supplement, “The Temple of Elemental Evil“. During the initial development of the module, Zuggtmoy didn’t exist and hadn’t even been conceived of. The dungeon was meant to be the lair of two other villains (Lolth and the Elder Elemental God) but the release of “Queen of the Demonweb Pits” in 1980 used Lolth as the main villain and this forced Gary Gygax to rethink the dungeon and create something fittingly new and evil. Enter Zuggtmoy.

Despite this early origin, “The Temple of Elemental Evil” itself was not published until 1985. During the interim years, hints of Zuggtmoy were teased and foreshadowed in other early D&D  publications. Her debut in 1985 marked her as the second demon lord to appear in a D&D adventure. Since then, Zuggtmoy has mostly been teased and hinted at throughout the years, and has not featured as prominently as she did in “The Temple of Elemental Evil”. Most recently she appears in “Out of the Abyss“, a supplement that is part of the D&D 5e Rage of Demons storyline. 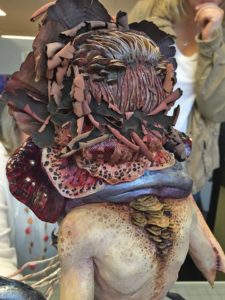 While the title “Demon Queen of Fungi” doesn’t exactly sound scary and chilling, don’t let the title fool you into thinking she isn’t dangerous. Ask any outdoors-y friend: they’ll tell you about all of the different mushrooms that can kill you.

Her original forms were either an old crone or a bulbous puffball mushroom (I wasn’t joking earlier.) In 2003, a video game The Temple of Elemental Evil (by Troika Games) re-imagined Zuggtmoy as a beautiful fungoid woman and it is this appearance that has carried through into Out of the Abyss and the cover of Dragon+. Through her history, her appearance has changed, with the most recent incarnation being stunningly sculpted and painted by the talented Virginie Ropars.

This newest depiction is so stunning, that I’m reasonably sure my (likely inebriated) bard would at least try to win her over if they crossed paths in a tavern. The opening line? “I just wanted to say hello because you look like a fun gal.”  Yes, you can groan now.

What Demon Lord would you like to see get a model created? Let us know in the comments!