The Hybrid Board Game – Where Tight Rules Meet Intense Action

Ever since Settlers of Catan stormed across the Atlantic in the late 90’s, the influence of the Euro-style board game has been prolific. The sense of streamlined mechanics focused on producing reliable and relatively tight game play stood in stark contrast to the American designs permeating the scene. Titles like Axis and Allies and Fortress America leaned on conflict and interaction in a juicy setting as opposed to a clean rule-set. It was something akin to form versus function.

The hybrid game combined both American and Euro sensibilities to utilize the best of both worlds. The prototypical example would be streamlined as well as conflict heavy. Interaction is facilitated not with a clunky 10 minute exchange of buckets of dice, but rather with elegant card combat or simple action point systems. The game continually gives you permission and affords action without making it a struggle to get to the juiciest parts.

The confluence of these design philosophies was a logical step that kicked off a groundswell of releases. These hybrid titles grew to be industry giants, clawing their way above the heap. Just like chocolate and peanut butter or rum and Coke, sometimes the whole is greater than the sum of its parts.

These three titles stand as the most prolific of the bunch, highlighting what makes these types of games so damn enjoyable. 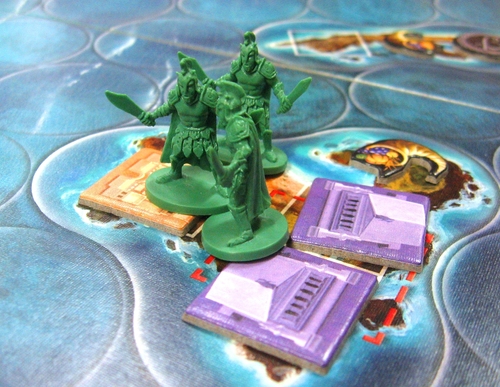 It’s difficult to point to any one game as the father of the hybrid game movement. Cyclades was not the first step, but it was certainly the first Neil Armstrong-sized one. This French design from Bruno Cathala and Ludovic Maublanc bolted an auction system onto a very thematic conflict and area control affair.

Players participate in a round of bidding where they curry favor with ancient gods of Greek mythology to empower their legions and build metropolises. Poseidon will grant swift movement of ships while Ares beats the drum of war. You also have the opportunity to acquire creatures of great power, such as a Pegasus or menacing Cyclops.

Cyclades achievement and legacy was in seamlessly integrating a distinctly Euro mechanic–the auction–onto a ruthless and efficient combat system. The game plays in 90 minutes and delivers satisfying heft for such a modest playtime. It also defiantly proved a European game didn’t have to have bland or uninspiring artwork and graphic design. Heck, they could even have little plastic Greek army men. 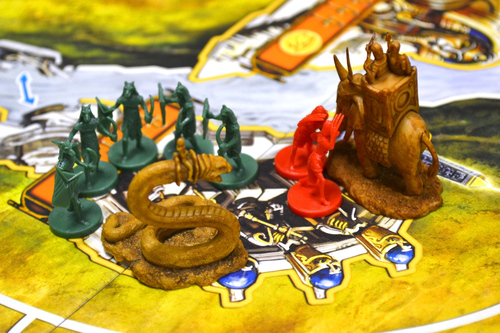 Kemet takes the eternal war to Egypt, featuring a similar thematic structure of wielding mythological standouts to beat down the frail human bodies of your opponents. Ditching the auction system of its predecessors, this game would aim its sights on delivering the classic experience of asymmetrically developing your faction by purchasing unique abilities during play. This is a direct distillation of the larger concepts seen in games like Advanced Civilization which caught on in a big way.

Kemet still maintains a hard edge with a modest playtime as it guides players towards dynamic territory swapping amid a hyper-active battlefield. You’ll pull off grand, sweeping movements where you destroy a number of enemy infantry and gain control of the vital temples on the board. The constant motion is cleverly supported by recycling lost troops to the owner’s back line. By avoiding prolonged struggles of attrition, the game feels alive and always moving towards climax. Kemet‘s continuous momentum building makes for an engaging and replayable experience. 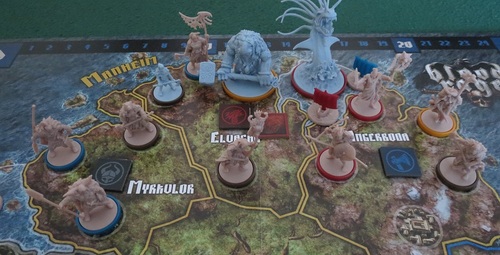 Blood Rage was the game of 2015 (it was on our Best of Board Games 2015 list). It chewed up its competition and spat them out in bloody clumps upon the wet Scandinavian ground. This Eric Lang design was the perfect storm of exceptional components and unparalleled design. It’s the culmination of an experienced designer staying hungry and using the accomplishments of his forefathers to forge his own destiny.

Immediacy is the name of the game. Instead of having to accrue resources or toss coins begging for assistance, this game allows players to participate in a quick draft of player powers and abilities prior to entering the crimson scrum. Then, the second half starts and you take turns throwing down warriors and tearing apart the locals. You don’t have to build up by paying off the gods or leaf through mounds of development tiles. You don’t need to evaluate long lists of units or carefully weigh your coin on a balanced scale. The game just keeps giving you permission to have fun. This “go ahead and do” in contrast to “ask and wait” is a game changer.

That’s why these amalgam designs are so empowering. They bring thematic tension and conflict to the table but don’t make you jump through any hoops or spend hours building to a climax. They’re easy to learn and run with the consistency of a Corolla while sporting the body of a Mustang.

In 2016, the boundaries between the Euro and American design style lie in ruin. Grab an axe and rage against the dying light of Ragnarok.

Have you played any of these hybrid games? What are some of your favorites? Please share in the comments below!