The History of the Floppy Disk - Nerdist

The History of the Floppy Disk 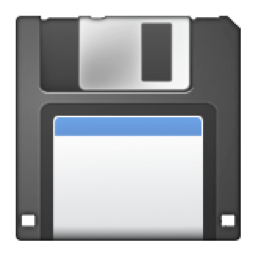 Three rows down and four columns over on the iPhone emoji “Objects & Symbols” page is a small black square. It’s to the right of a pager and directly under a CD, perhaps giving more insight into the relevance of the object. It’s a floppy disk and it’s pretty much extinct at this point.

Back in the late 1960s and early 1970s, floppy disks were born as a new form of storage medium consisting of a magnetic disk enclosed in a piece of flimsy fabric and later encased in plastic for durability. For 40 years, the “floppy” reigned as the primary and most reliable form of data storage. As most technologies do, the floppy disc began large (8-inches) and got smaller as the years passed by and technology improved. Before near extinction in the late 1990s, the 3.5-inch disk was the most popular size.

The floppy disk was an invention of IBM as a way to load microcode into one of their mainframe computers and thus effectively replaced the tabulating card. According to Jim Porter, a “storage veteran,” “the floppy drive came along and made it possible to do all of this much more efficiently than cutting down all those trees and making all those tab cards”. By early 1971, IBM shipped its first computer with a read-only drive for the 8-inch floppy disk causing other companies like Memorex and Shugart to take notice. In 1972, Memorex had released their own version of a read-write drive for 8-inch floppy disks, which weren’t compatible with anything else. IBM released the first two-sided 8-inch floppy disk in 1976, the same year a smaller 5.25-inch disk was released patterned after a cocktail napkin.

For the early years of the floppy disk through the 1980s, many computers and devices had no hard drive storage so the floppy disk was the primary way to store information and run applications. As technology increased, smaller disks ranging from 2-3.5 inches were created, eventually deciding upon the 3.5-inch in 1982. Two years later in 1984, Apple released their new Macs with the 3.5-inch disk drives and in 1985 Atari adopted the new size. By the late 1980s, 3.5-inch disks were a hit and 5.25-inch disks were last year’s prom queen.

For a decade the 3.5-inch floppy disks were king but in 1998 when Apple released the iMac with only a CD-ROM, the writing was on the wall: floppy disks were on their way out. By the early 2000s most computer companies stopped including them on their latest models and recordable CDs were made readily available for pretty cheap. Throughout the early 2000s, CDs replaced floppy disks as the go-to data storage solution but as hard drives became less expensive and the Internet flourished, CDs also declined.

The 2007 iMac I type this on has 500GB of internal storage and a CD-ROM drive but my 2014 Macbook Pro has no CD-ROM drive and 250GB of storage. We’ve digressed back to computers with little built-in storage. Instead we are encouraged to use cloud storage solutions and external hard drives. Over the course of the last 70 years, we’ve had no storage then floppy disks (8-inch, 5.25-inch and 3.5-inch), hard drives, recordable CDs, USB drives and now flash storage. We’ve cycled-through and returned to no “disks” of any type. But doesn’t history repeat itself? I’m not ready to toss my 3.5-inch floppy disk with my high-school homework on it quite yet.