The History of RPGs: The Story of the First Sci-Fi RPG 'Metamorphosis Alpha' - Nerdist

The History of RPGs: The Story of the First Sci-Fi RPG ‘Metamorphosis Alpha’

Metamorphosis Alpha is the first-ever science fiction role-playing game. Published in 1976, the game comes from the dawn of role-playing. (As a matter of fact, it is the first product ever marketed as a “role-playing game”!) For all that, it’s aged like a fine wine, and has a lot to tell the 21st-century gamers about how to make and play RPGs

Imagine that you are playing a new role-playing game. You’re ordinary humans in a medieval village, and you start exploring the local area. You discover a few wondrous objects which allow you to do amazing, magical things, and continue apace in your life as an adventuring explorer.

Then, your gamemaster describes to you a magical portal of metal that slides open, and when you step in, if you manage to make the right motions on the wall, the floor starts to rise. And you realize you’re in an elevator. Or perhaps you find a window which reveals that you are not, as you thought, living on the solid earth of a fantasy planet, but rather trapped on a spacecraft hurtling through the stars. 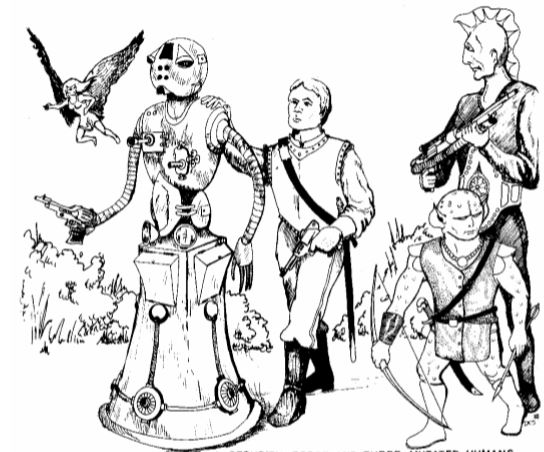 The Birth of Metamorphosis Alpha

It is a strange thing that the whole course of a life can turn on a chance meeting. Jim Ward was browsing the science fiction and fantasy section of the News Agency, a bookstore in Lake Geneva, Wisconsin in the early 1970s with seven books in hand. Another bearded and bespectacled gentleman was likewise browsing the shelves at that exact same time, and had likewise picked up seven books.

The pair then noticed that they had picked out the exact same seven books. The coincidence being too striking to pass up, they began a conversation. The man at the News Agency that day was Gary Gygax, co-creator of Dungeons & Dragons. Gygax told Ward that he, “had a game where you could play Conan [the Barbarian] and fight Set.” Yes, Ward was into that.

Soon, Ward was a regular player in Gygax’s D&D game. Gygax founded TSR to publish his game, and soon found himself busy with the success of D&D. So busy, in fact, that he couldn’t find the time to write a science fiction sequel to the game. So he asked Jim Ward if he’d be interested.

Jim Ward recalled that he was not a professional writer at the time, and that he’d never designed a role-playing game before, so it was a huge opportunity for Ward, and a bit of a risk for Gygax.

Luckily, the risk paid off. Both Gary Gygax and TSR co-founder Brian Blume played the game and loved it. Gygax even ran his D&D group through the Starship Warden, ceding his dungeon master’s chair to Ward as long as the group was on the ship.

In an even more fascinating twist, Metamorphoshis Alpha is the first game ever produced that described itself as a role-playing game. Consider, for example, the cover of the Dungeons & Dragons White Box from 1974, which proclaimed, “Rules for Fantastic Medieval Wargames Campaigns Playable with Paper and Pencil and Miniatures Figures.” With hindsight, it is obvious that such a description of D&D is struggling with the fact that D&D is a completely new genre of game, what we today call role-playing games. By 1976, according to TSR’s first employee Tim Kask, “The term [role-playing game] had only recently come into use,” to describe games like D&D and Metamorphosis Alpha. And so Metamorphosis Alpha is not just the first science fiction RPG, but also the first role-playing game to be marketed as such.

The game has gone on to have a long life. Its first edition, a terse, tight, and meaty 35 pages, is still available in PDF format. The game was so influential and important in role-playing game history, that Goodman Games kickstarted a reprinting of the original 1976 edition of the game on archival quality paper, with new adventures, an introduction, and even Ward’s original notes on the game.

There’s only one way to find out if your players will finally be the ones to survive the Control Room, and that’s by playing Metamorphosis Alpha. 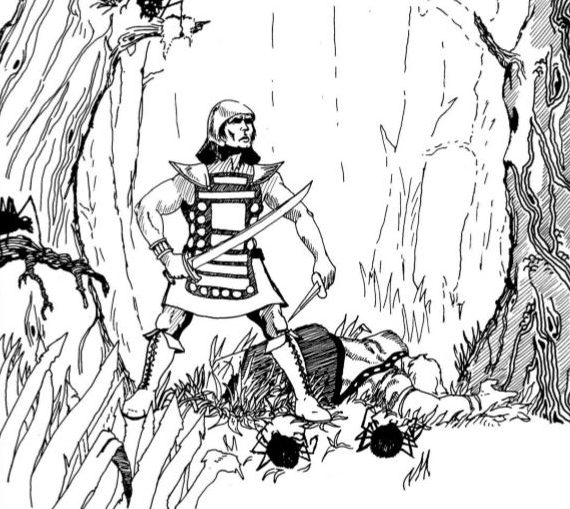 The Premise of  Metamorphosis Alpha

In the future, humanity has found its home among the stars. Generational colony ships have begun departing our solar system for new planetary homes, drifting through the galactic black like dandelion seeds picked up by a lazy wind on a summer’s afternoon. These voyages, which could take decades if not centuries, would make humanity a truly galactic civilization.

The Starship Warden was to be the greatest of these colony ships ever constructed. The Warden was 50 miles long, 25 miles wide, and eight miles high. A crew of 50,000 saw to the needs of 1.5 million colonists, and all the flora and fauna of Earth. The vessel held, “complete Terran environments”, so it was thought that the trip would not be particularly difficult for the colonists.

An encounter with a cloud of space radiation would change everything.

The radiation was of a type never before encountered, and it penetrated all the ship’s shields, flooding every deck with deadly energy. Ward wrote, rather wryly, “most of the human beings exposed to the radiation simply turned to piles of calcium with no advance symptoms.” The radiation mutated the plants and animals of Earth, transforming them into astounding and terrifying new species.

The humans who survived took to living in the large park areas on board the ship, which for some reason were most resistant to the bizarre new radiation. A few crew members attempted to take back control of the ship, but they failed. Within generations, humanity regressed to a tribal state, forgetting, even, that they were on a starship, instead simply knowing that anyone who wandered too far from the simple farming villages were consumed by terrifying abominations.

Ward encourages running Metamorphosis Alpha without telling players they are playing a science fiction game. Let them think they’re playing some sort of standard fantasy game, and then bam! Hit them with robots.

It is up to the players to explore the ship, taking what they can of advanced technologies to fight mutated monstrosities, discover the Control Room, and just maybe, steer the ship to a new home. But Ward ominously mentioned that, “No one has ever survived the Control Room,” making such a happy ending unlikely!

The game takes what 1970s RPGs did best, exploring and surviving, and neatly translates it to science fiction.

Have you played Metamorphosis Alpha? Share your story with us in the comments!

Special thanks to Jim Ward for taking the time for an interview.