The Hair-Raising History of Five Nights At Freddy's - Nerdist

The Hair-Raising History of Five Nights At Freddy’s

Game franchises have managed to make a name for themselves over the course of several years – but only one has managed to make it in just about a year’s time with four different games. That series? Five Nights at Freddy’s.

What started out as an indie title on Steam has grown into a survival horror phenomenon as players take on the roles of several unlucky folks asked to keep a close eye on camera and lights in an effort to stave off horrifying animatronic animals that take on a life of their own.

While some may complain about multiple games coming out just months after one another, developer Scott Cawthon has managed to eke out a piece of scary history with his games – and he’s not done yet, as a final DLC pack due this Halloween will wrap up the saga in shiver-inducing style.

But let’s go back to where the series began with the original Five Nights at Freddy’s, which launched one year ago. The game puts you in control of a security guard, switching between various security cameras using a limited amount of power, while trying to keep the animatronic animals from “getting him.” If one manages to get into the room, the signal goes out, and it’s game over.

This is a very effective formula, mainly due to the “jump scare” theory. When Freddy and his pals do pop out, they do so screaming with a deadeye stare, so that they catch players completely off-guard. It’s probably a good reason to keep the lights on. 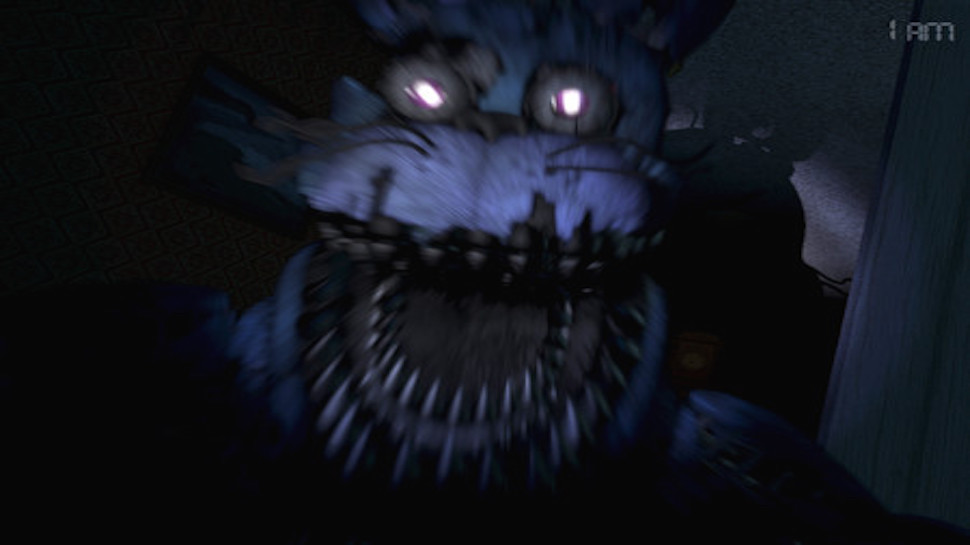 Five Nights At Freddy’s 2 arrived in November, with a similar set-up to the first game. You’re still a guard looking over Freddy Fazbear’s Pizzeria, but now there are more animatronic creatures lurking, as well as a character mask that may (or may not) fool them into thinking you’re one of them. Once more, you’ll have to keep watch over cameras so they don’t “get you.”

The third game, Five Nights At Freddy’s 3,which came out in March of this year, diversifies from this formula, as it takes place 30 years in the future at a Fazbear’s Fright exhibit, based on the now-closed pizzeria. There’s only one animatronic creature this time, although others show up in the form of “phantoms,” ready to throw you off – just long enough for the real one to catch you off guard.

However, Cawthon saved the best for last with Five Nights At Freddy’s 4, which came out just last week. In this game, the pizzeria is out of the picture, as it takes place inside a kid’s bedroom. The lights are off, and he’s trapped, having to move about the room flickering a flashlight before the animatronic creatures can catch him. Even though the movement is limited, it’s a change of pace from previous Freddy’s games – although the sheer intensity is still intact, as you can see from the trailer below.

We won’t go too far into spoiler territory with Freddy‘s storyline, but those who play it will get a deeper understanding as to why the animatronic creatures act the way they do, and, worse yet, why they’re so determined to catch you. There are also backstory sequences, told in Atari 2600-style cinematics that paint an even darker picture of what’s going on. (One particular one in Freddy’s 4 will make you cringe.)

If you’re in the mood for a game series that will seriously make you freak out – especially if you can’t stand those abominations from Chuck E. Cheese – then Five Nights At Freddy’s is definitely for you. The games can be purchased on Steam here.