I don’t know exactly how I would react to a supernatural being telling me a) there is an afterlife and b) no matter what I do I will end up in Hell. What I do know is that I would not respond by mixing meat, beans, and cheese with Peeps and Peanut M&M’s. Apparently I only do that if my editor asks me to, because I made Chidi’s existential crisis chili from The Good Place. It turned my kitchen into a very bad place. 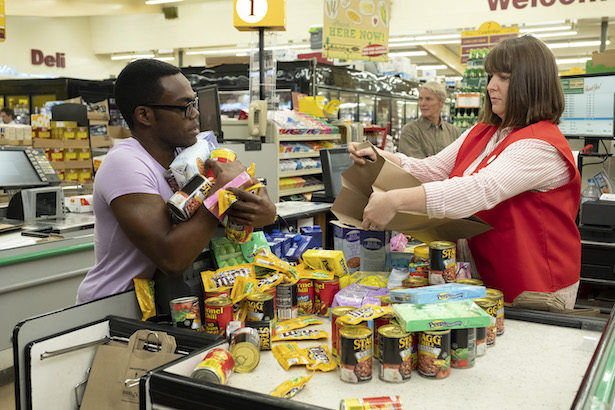 I had no desire to make a comically oversized pot, so I went with a single large can of Hormel chili “with beans,” a “share size” bag of Peanut M&M’s (I’d like to share with you that bag is not big enough to share), but because it’s not currently Easter I had to make do with what’s available. In the spirit of the original recipe I went with three distinctly different colored Peeps: two types of Halloween varieties–orange pumpkins and dark purple spooky cats–and white Christmas snowmen. 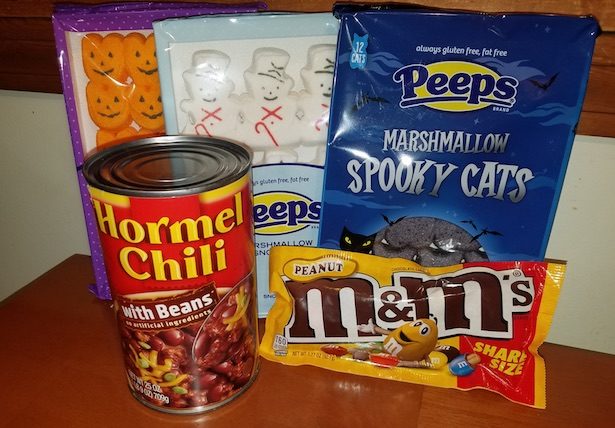 If you’re worried this isn’t authentic enough because I didn’t use Easter bunny Peeps, please know you’re a bad person.

Chidi must have had some chili before we saw him cooking it in class. We didn’t witness him eat any, but he told his students it tastes bad, and after they left he told Eleanor his stomach hurt. In this overhead shot of the pot where he added fresh Peeps and M&M’s we can see both already cooked in with the chili (hence why they’ve lost their color). I tried mine both ways, with the candy blended in and then with them added as toppings.I would come to regret doing that, but in fairness I regret everything about this. 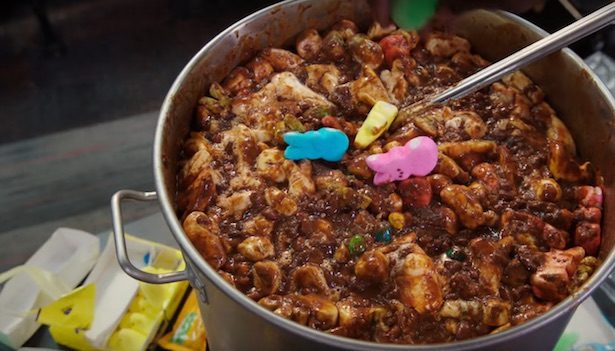 Step 1: Open the can of chili and be overwhelmed by how bad it looks and smells. “This is disgusting.” 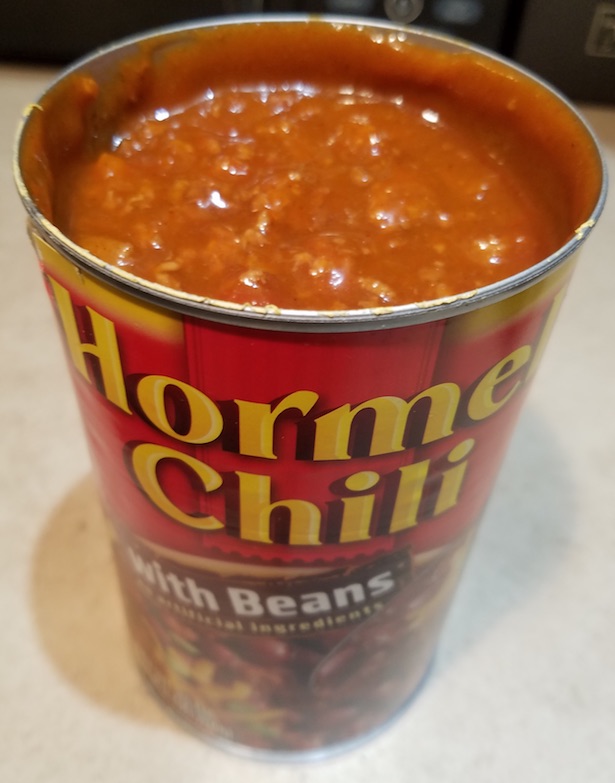 Step 2: Put the gross chili, which will barely come out of the can, into a pot over medium heat and wonder if you should find a new line of work. “I really don’t want to do this.” 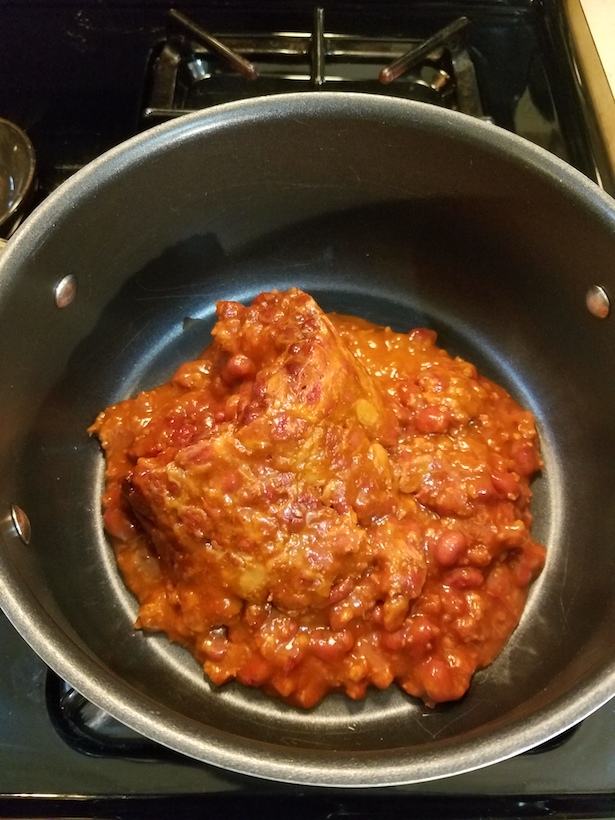 Step 3: Add the Peeps and M&M’s to the pot and realize you’re actually going to eat this soon. “Oh my god.” 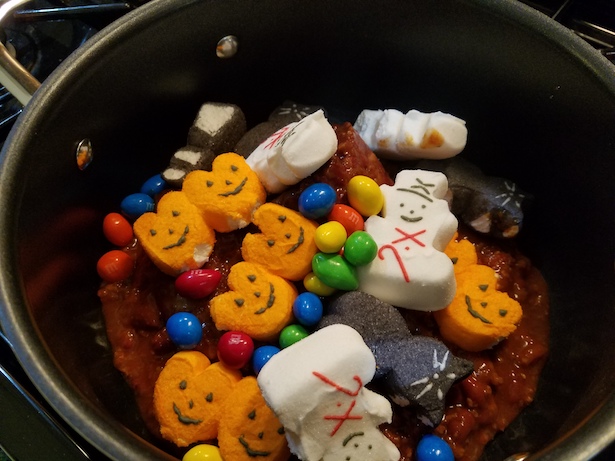 Step 4: Mix all of the ingredients together, heat for eight minutes, until the Peeps bubble. “I can’t even look at this.” (Here’s a video with bonus commentary.)

Step 5: Try not to smell anything, only to realize your whole kitchen reeks–that’s why you keep gagging. “It smells like a gym sock.”–my wife, the only other person in the room 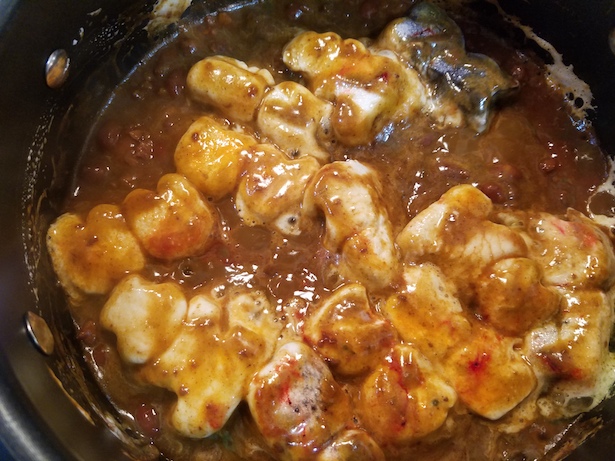 Step 6: Remove from heat, debate if you can even put this in your mouth. “Sometimes your job is cool. Today is not one of those days.” –my wonderful, patient, understanding wife

From what I saw on the show I expected both the Peeps and M&M’s to mostly hold their form during the cooking process. They did not. Most of the Peeps melted entirely, with the others mainly turning into white globs. The Peanut M&M’s disappeared, with only the hard to find peanuts as evidence they were ever there. (Guess I should have gone for the chili without beans–for multiple reasons). This gave the chili a huge influx of chocolate and marshmallow mixed right in. Maybe I could have avoided this if I heated everything at a lower temperature for longer, but thank goodness I didn’t. This went on long enough.To get a concoction like what we saw from Chidi, I probably also needed to continuously add more sweets throughout the process. But if he was cooking his for as long as it seems, he definitely would have had his candy melt as well. So my own version of Existential Crisis Chili didn’t look the same, but it likely tasted the same. 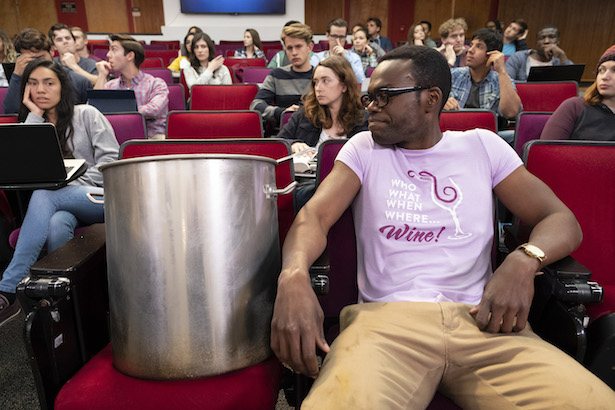 Note: I put the word lessons in this section’s subtitle in quotes because none of this technically qualifies as a “lesson.” A lesson is generally something useful. The only “lesson” I learned here is I am a very stupid idiot who should probably wear a Blake Bortles jersey everywhere.

Here’s what my first dish, without extra candy toppings, looked like. 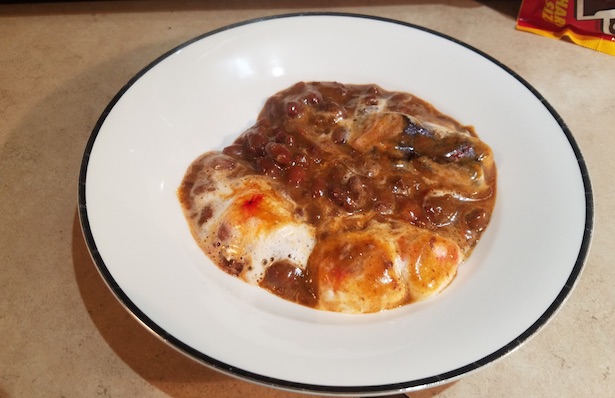 Yeah….Yeah.Before I get to my actual review, I want you to know I am not a food snob. I’m actually a weirdo who likes airplane and hospital food. I love frozen food and cafeteria food. I’ll try almost anything. Since I’ve never had it before I was worried the canned chili might be gross on its own, but even then I thought there was a chance this might be “fine,” like a very strange, sweet and savory dish.But I lost my optimism with the smell. It was so bad it was hard to put a spoonful into my mouth, but I did it. I also made sure I had a bean, a peanut, the remnants of a Peep, and chili on it so I’d get the full experience.Whatever you think this tasted like I promise you it is was much worse. It was like chocolate gravy mixed with dog food that had turned rancid–ten years ago. I couldn’t get it down. It was just so vile, and the horrible odor was so overwhelming. I spit it into my garbage so I wouldn’t throw up. 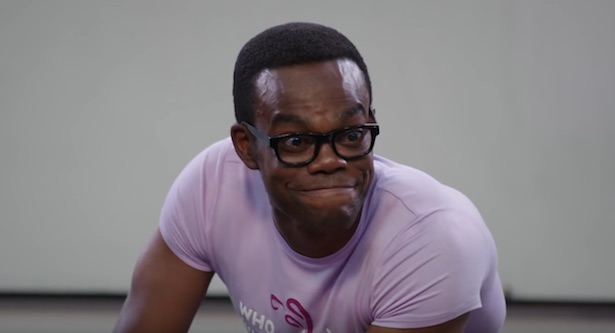 I genuinely considered stopping right then, and I was very glad I made the decision during the cooking process not to make my wife taste it (out of love for her and fear for our marriage). But I’m a professional, so I soldiered on and added those fresh Peeps and M&M’s for a second, final tasting.

“Better” Is a Relative Word

Was this easier to eat with non-melted marshmallow and chocolate? Yes. Was it edible? Fork no.The sweetness of the new candy helped me swallow half of my bite, because the intact Peeps cut the nastiness of the chili slightly. Slightly. The whole Peanut M&M’s weren’t a help, because while you normally like some texture in your food this was not one of those times. I didn’t want to actually chew anything. That takes time, and I wanted this to end.I spit out half of this bite as well, but honestly I was impressed I got down some of it. 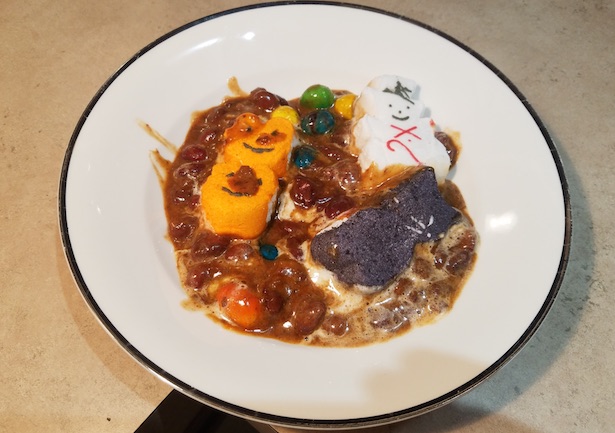 I didn’t really swallow enough to get a stomachache like Chidi, but I was nauseous throughout and dry-heaved a few times. I know that sounds overly dramatic but it just smelled so, so, so bad, and that stench permeated the whole kitchen. In fact, when I was done we lit two large candles to help clear the smell, and two hours later it was still terrible. The faint aroma of the chili was still there when I woke up in the morning.I also couldn’t get the taste out of my mouth and nose. I tried drinking iced tea, then used mouthwash. When that didn’t work, I swigged some Fireball whiskey and then took an extra slug to clear my throat. Finally I ate some regular M&M’s and that did the trick. 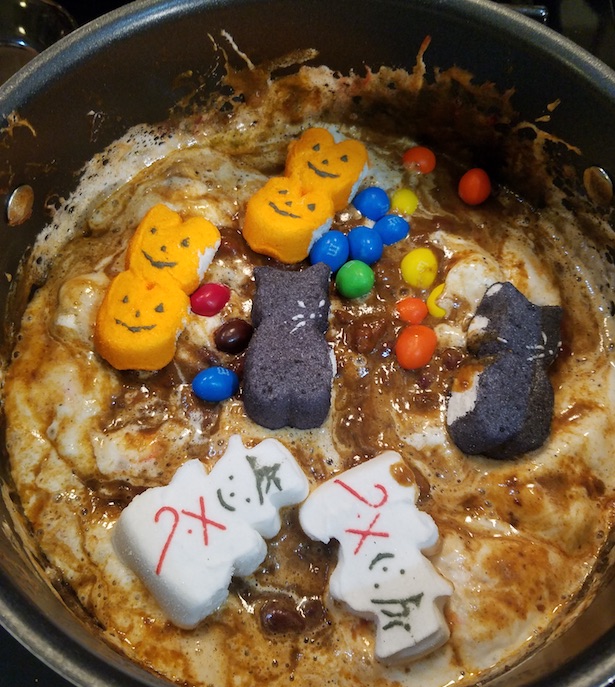 On a more personal, unseen level I imagine I will carry the scars of this experiment with me forever, but if I can forget the smell I’ll be okay.

I don’t think Chidi was fired by the university because he had a mental breakdown in front of his students, I think he was fired because he did tens of thousands of dollars worth of damage to the classroom. They definitely had to burn down that room to stop the smell from spreading.As for the chili it was awful, nasty, and basically tasted like forking shirt. The only way anyone could get that down without gagging would be if they were experiencing the worst emotional reaction in human history. Still, I don’t believe that, because I wouldn’t eat that again even if a demon showed up and told me my soul was damned to an eternity of torture.It was so bad I might say no to my editor next time. 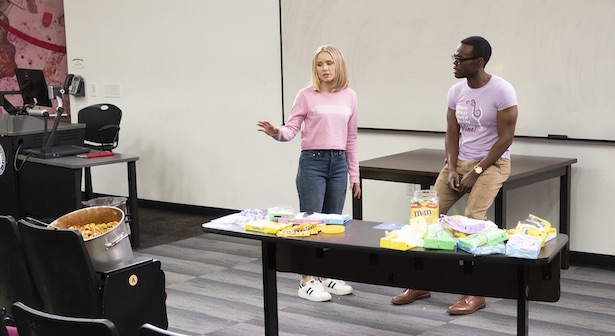 But this wasn’t a total failure, because I did realize something during the process that could inspire all of us to be better humans, to live better lives, to make the world a better place: Chidi’s Existential Crisis Chili is definitely what they serve at all restaurants in the Bad Place, so you should definitely be a good person.Would you still be willing to try this after our review? WHY? Tell us the reason in the comments below.