We’re always blown away hearing stories of people who have been inspired to play D&D because of our show  Critical Role, and are always excited to share their remarkable stories.

When most people think of their retirement years, those thoughts are of idle gardening or watching grandkids rumble around the house. There might be a bit of travel involved or even a move to a warmer climate for health or comfort. But one grandma, inspired by her family’s new-found love of  Dungeons & Dragons, decides to spend her twilight years dodging traps, defeating monsters and stashing some magic items in her retirement account. She’s playing Millie the Halfling Lore Bard, warming hearts across the Internet by chronicling her first RPG experience on Twitter as DnDGrandma.

The day that the DnD Grandma first learned how to play. That’s her daughter-in-law going over her character sheet with her. #nevertooold pic.twitter.com/XVxUX29wr8

“My son was running a game for his wife, his sister, her husband and his wife’s sister,” she said.  “They thought it would be a nice idea to get me involved.  With much trepidation, I agreed. I tried it on a lark, thinking it would just be a one-night thing, but I fell in love with it and haven’t looked back.”

Her biggest challenge is one that a lot of new D&D players face; the rules. But it paid off in a spectacular moment featuring a pirate attack. “So…many…rules,” she said. “I have a hard time keeping everything straight sometimes, but I have a great group that helps me a lot. The first time Mellie used fireball was on a pirate ship that was on their way to attack the ship we were on.  Mellie lit them up when they were still 50 feet out.  Between that and Olenna (our Ranger) sniping with her longbow, no pirates made it aboard!”

DnDGrandma – “I would like to cast Fireball on the pirates.” DN – “Ok. Just so you know, their ship is wooden.” DnDGrandma – “I didn’t ask about the ship. I said ‘Fireball!’ “ #actualgamequote #dndgrandma #nevertooold #alwayslearning #alwaysgrowing #dungeonsanddragons #dnd5e

Getting into the game is a direct result of her GM. “I started gaming almost four years ago,” said her son, Vince, who runs the campaign and the DnDGrandma Twitter account.  “I was always curious about D&D but never knew a group that I wanted to join.  About 4 years ago, several of my close friends were talking about getting a game together and I figured it was the perfect time to try it. I’ve only ever played D&D 5e.  This campaign with my family that we are wrapping up next month is the 3rd campaign that I’ve run and by far the longest.  The party also includes my wife (Elf Cleric), my sister (Dwarf Ranger), her husband (Half-Orc Fighter) and my wife’s sister (Tiefling Druid.)  I am turning the reigns over to her next month and joining the party as a player so I’m very excited about getting to be on the other side of the DM screen!” 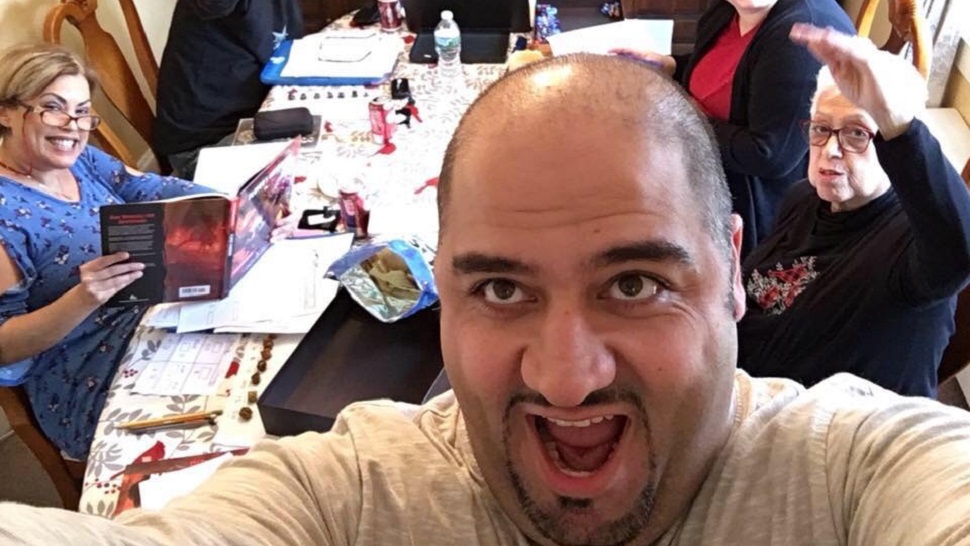 Groups that reach out to new players are what keeps the hobby moving forward. Vince was inspired by our own show  Critical Role to start up a group of his own. Matt Mercer’s storytelling style inspired him to tell his own stories and he found a great group of participants in his own family.

“My main inspiration came from the Tal’Dorei Campaign Guide, the first Critical Role and a comic book series called Fables, specifically Volume 4 ‘March of the Wooden Soldiers’,” said Vince.  “The first chapter titled ‘The Last Castle’ is one of my favorite comic book stories ever. They are phenomenal role players and Matt Mercer is one of the best storytellers I have ever seen.  If I ever become 1/5 of the DM he is I will die a happy man.”

“Next month Vince is going to run an epilogue for our characters which is supposed to take about an hour,” DnDGrandma said. “Then he turns over the reigns to his sister-in-law! Mellie’s story is coming to an end. She will be retired. On this new journey, I will be playing Bree – a Halfling Rogue.”

Do you have an awesome story of turning someone into a D&D player? Tell us about it in the comments!