Shining a Light on Women in STEM with THE CURIE SOCIETY

Female scientists are incredibly rare in media, but a new comic is here to change that. The Curie Society shines a light on women in STEM in an exciting kid-focused story. Imagining a world where Marie Curie established a secret society for women in science, the graphic novel centers on the newest recruits. Simone, Maya, and Taj are students at Edmonds University, but after solving a series of complex puzzles they’re inducted into the titular group. It’s an action-packed sci-fi adventure that puts women at the forefront. To celebrate the release, we dug into the process behind the story with its developers, Adam Staffaroni and Heather Einhorn. 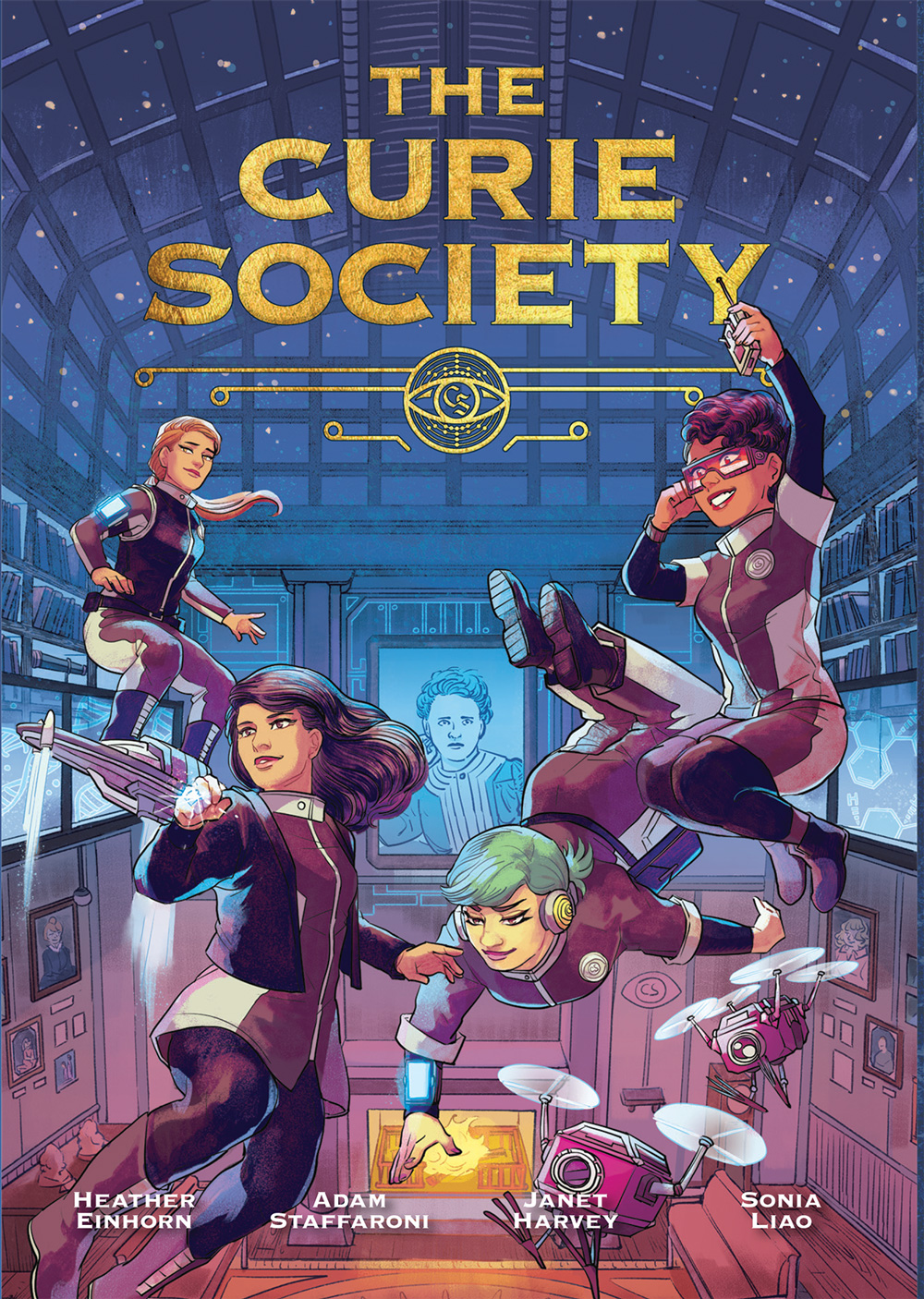 Nerdist: How did the Curie Society come about?

Staffaroni and Einhorn: A few years back we attended a Comic-Con panel focused on women STEM characters and how they were represented—or not represented—across media. Television, comics, movies, etc. The thing that struck us was the end of the panel: one of the questions was about what the panelists would love to see in media to improve depictions of female scientists. They wondered if there could be a show that had two women scientist characters in a lab instead of just one, or if the woman could actually be the head of a lab. We left that panel wanting to dream bigger. Surely there could be more than just two women in a lab. Three? Four? What about ALL? The most we could do would be a lab with all women. So we set out to see if we could pull it off.

Could you talk about building the right creative team for the book?

The first person we contacted to work on the book was Joan Hilty (and her partner at PageTurner, Pete Friedrich). We had overlapped with Joan when we were both working at DC Comics, and had the utmost respect for her as an editor. She was super excited about the project and introduced us to Pia Guerra, who was also really excited about what we were trying to put together and helped us with early concept art for the Curie Society. Their excitement told us everything we needed to know about where this book could go.

We also knew it was important that the characters and the world that we were building were authentic to the experiences of real working female scientists. So often with ensembles of female characters, there’s just one “smart one,” and that’s as deep as the character goes. We were starting with an ensemble of all smart women, so we knew we had to dig deeper into each character to make sure they were all three-dimensional. So we then brought on Nadja Oertelt and her team at Massive Science who, along with MIT Press, the book’s publisher, assembled an incredible group of working female and non-binary scientists and science communicators like Kasia Chmielinski and Britt Wray to advise on the book. Our interviews with them helped bring into focus not only the characters, but the science elements and themes that were woven throughout the book. 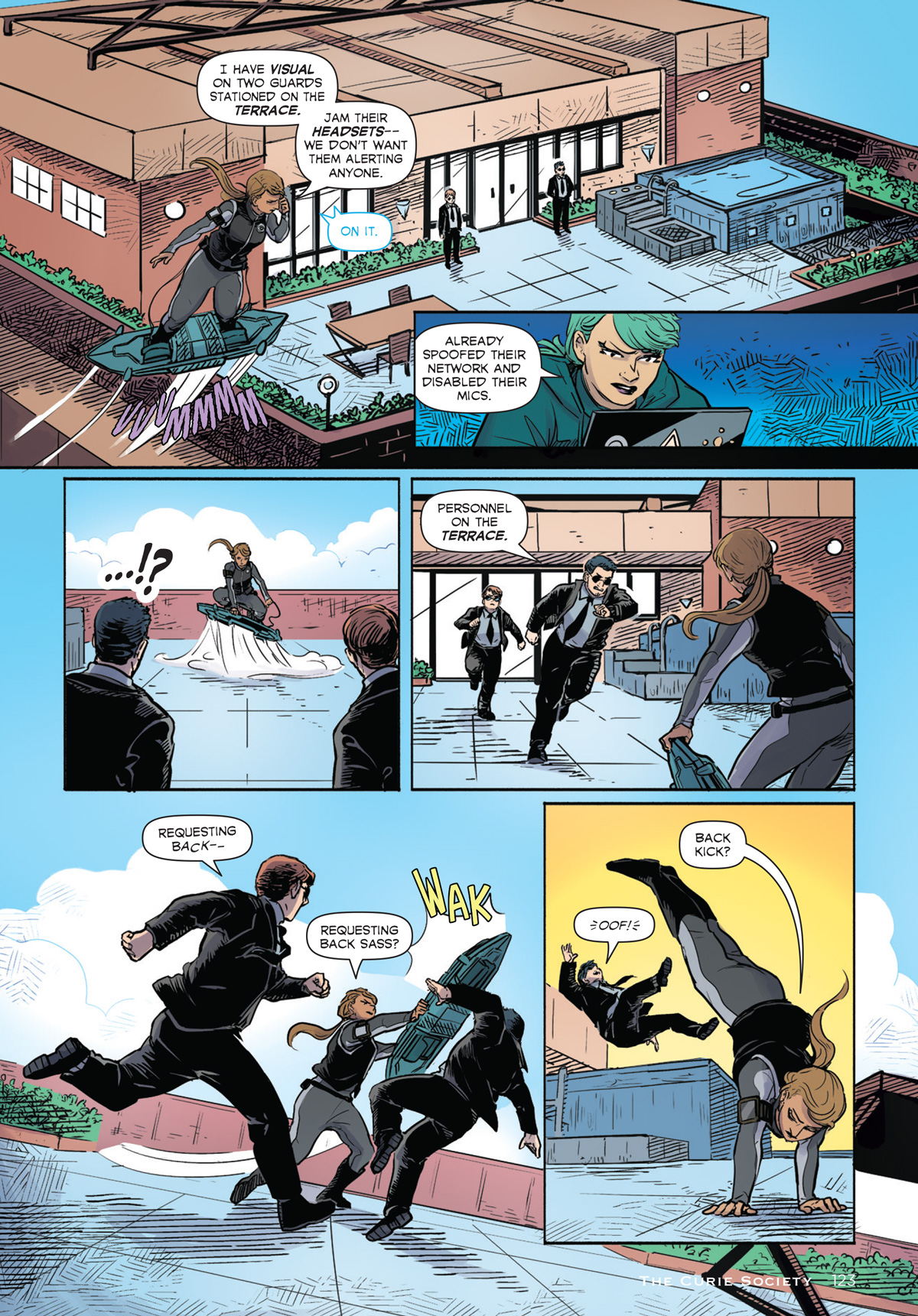 After we had a solid foundation rooted in the authentic experiences of real scientists, it was time to assemble the creative team! We were really impressed by Janet Harvey’s work on Angel City and loved the technology element she brought to the table as a writer for multimedia and video games. And Joan also introduced us to Sonia Liao, whose work was brimming with personality and energy and turned out to be just the perfect artist for the project. Rounding out the team were Johanna Taylor, Morgan Martinez and Annette Fan-Zhu, who all did amazing work and were wonderful to work with.

What was the most surprising thing you learned while prepping for the book? 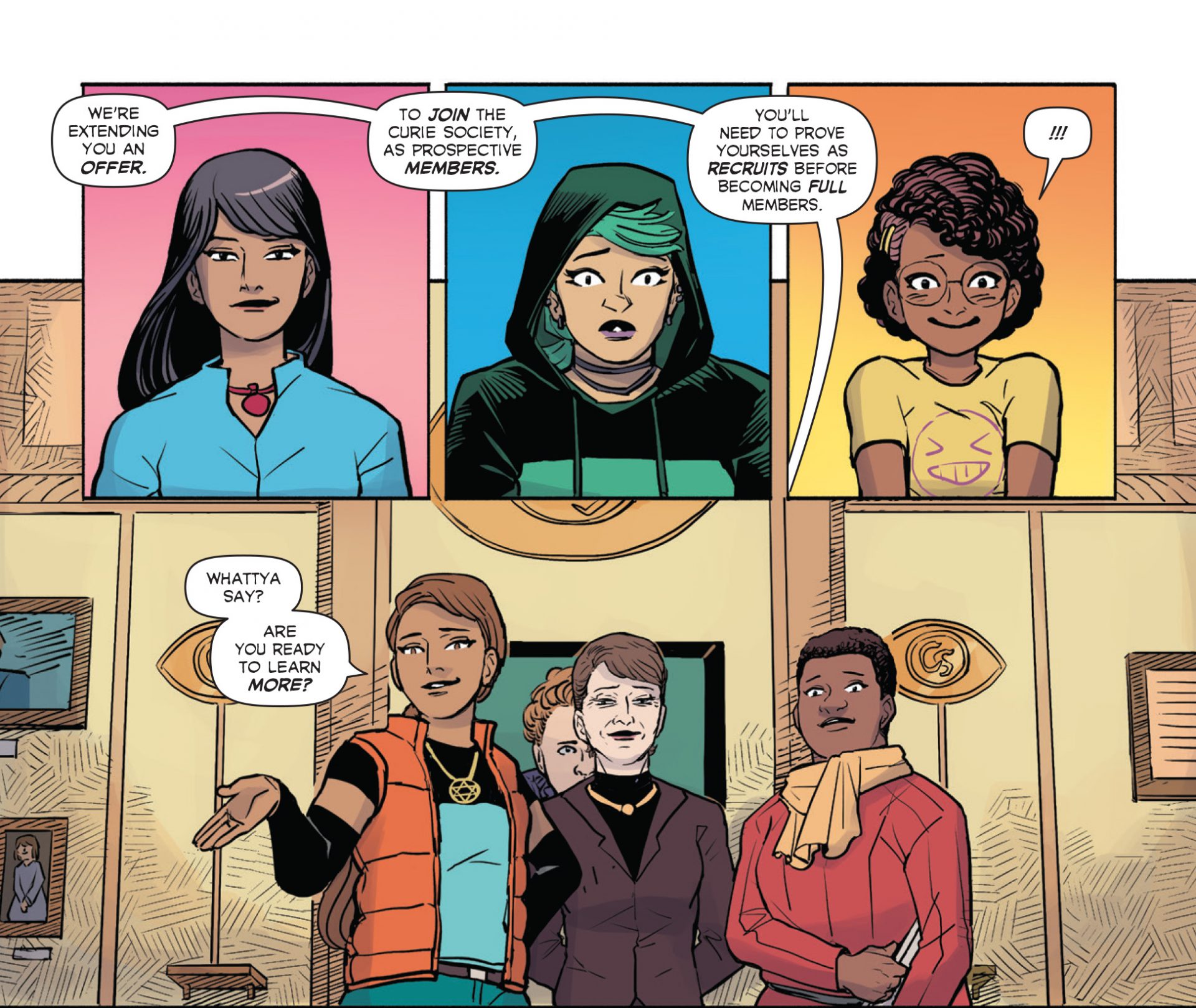 We were astonished by how many women scientists had been historically overlooked! Even with amazing films like Hidden Figures bringing more of these women into the light of day, there are dozens more out there who haven’t been recognized. That’s why we put a lot of care into developing the historical fiction elements of the Society itself, to send the message that women getting into science isn’t a new thing; regardless of notoriety they’ve been there, doing important work and making incredible advancements. It also surprised us how many challenges women scientists still face today.

A majority of the women we interviewed had someone along the way—a teacher, a guidance counselor, etc.—tell them not to pursue STEM fields because of their gender. We heard a lot of stories of them being discouraged, overlooked, or dismissed, and having to fight through that, sometimes repeatedly, to get to where they are today. Those are challenges that the next generation of women in STEM will still face, and hopefully this book is something that can encourage them when they need the support.

What do you want readers to come away with when they read this story? 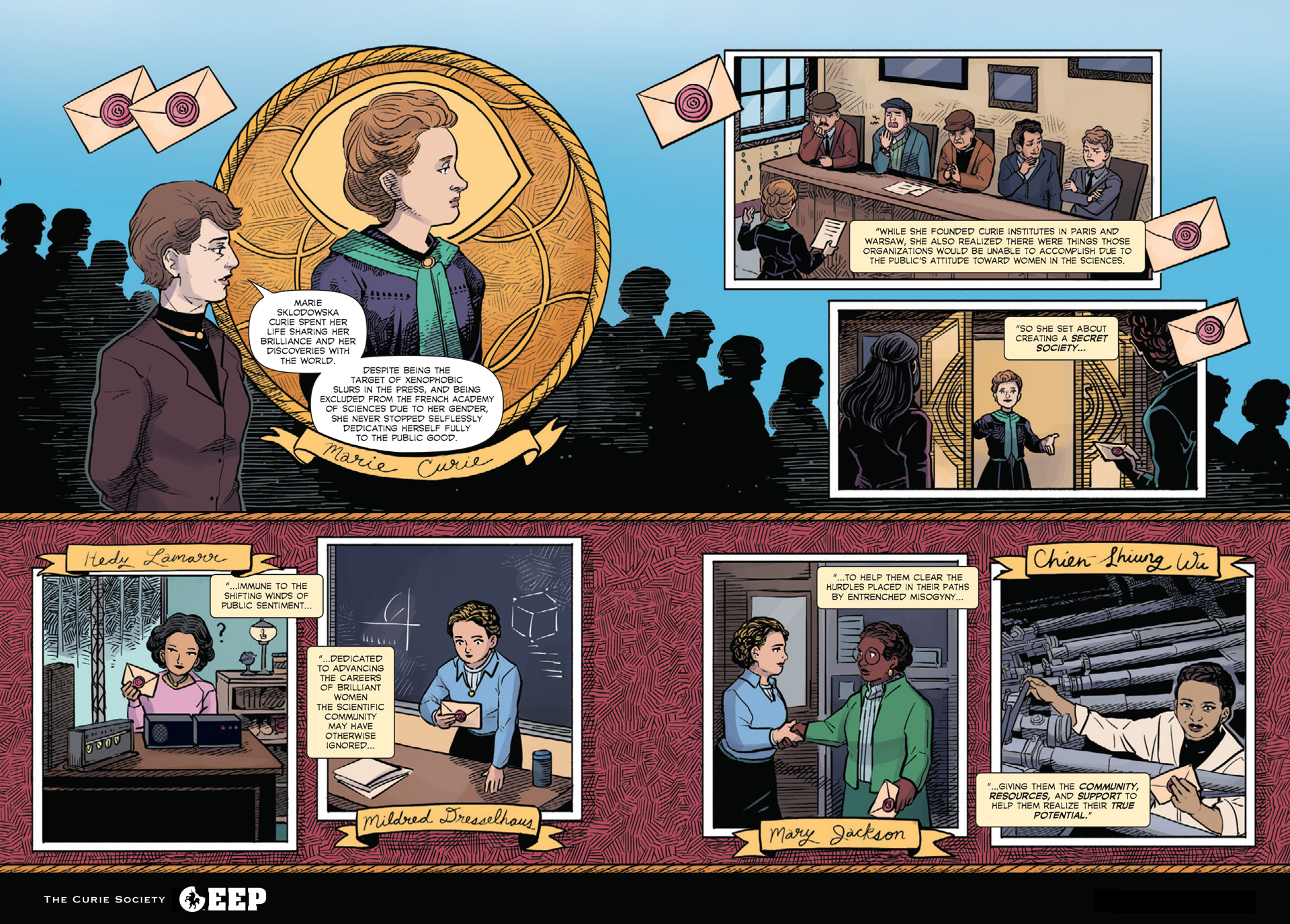 No matter who you are or where you come from, if you’re interested in STEM, you can do it! The great thing about showing this diverse group of characters succeeding is that the message is anyone can do it if they’re determined enough. We’re also happy we got to showcase the advisors in the back of the book. These are all real scientists with their own unique stories, succeeding in an array of different STEM-related fields. Some as scientists, mathematicians and engineers, some as teachers and researchers, and some as communicators writing and talking about science.

We’re learning that keeping people educated about science and technology isn’t a linear thing, it’s something that needs to be reinforced constantly. These women and these characters are doing that, and we want to show young people everywhere that no matter what their talents are, if STEM is what they love, there’s a place for them.

The Curie Society is out now!