Inhabiting fantasy worlds, as both a visitor and creator, is one of D&D‘s main draws. In the game’s 30+ years of publication, developers and homebrewers alike have spawned a literal Multiverse of worlds to explore, some more worthy of your tourism than others. 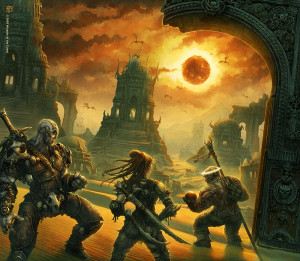 How often do you see post-apocalyptic fantasy? First published for D&D‘s 2nd Edition and then again for its 4th, Dark Sun is basically Mad Max with swords and dragon bones. Some magical disaster desiccated the planet, turning the sun red, and now despotic Sorcerer Kings rule autonomous city states, fighting over what little greenery remains. Smiles are as scarce as resources where slavery is the norm, telepaths are listening, and spellcasters are persecuted for defiling the world. Metallurgy is a mostly forgotten art, so players wield breakable weapons of bone and stone, occasionally finding steel within ruins of the Green Age. If you like brutal themes and genre-bending, Dark Sun might be your scene. 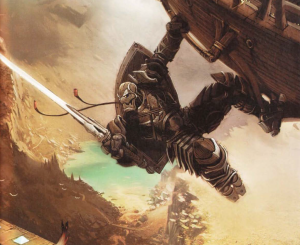 Winner of Wizards of the Coast’s Fantasy Setting Search contest in 2002, Eberron marries magic with steampunk’s technology, offering a world of elemental-powered airships, industrial nobility, and arcane tinkerers. Designer Keith Baker drew inspiration from films like Casablanca and The Name of the Rose, building an Action Points system to manifest pulp flourishes. I dig the playable Warforged race, which puts you in the mind of a soldier drone seeking purpose (although their explicit maleness serves a pedantic point). If you want to sling spells in a tailored coat, check out Eberron. 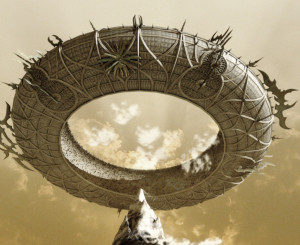 Formally discontinued with D&D’s 3rd Edition (clearly to free up brand language for Magic: the Gathering), Planescape‘s seminal content resurfaces now in pieces throughout D&D core books, dissolving into the base canon. At its heart, Planescape is the original multiverse, a mandala of planes revolving around Sigil, “City of Doors,” which sits atop an infinite spire. The setting plays with spacetime philosophy, and prioritizes roleplaying and critical thinking over hack-and-slash belligerence. (This is, of course, the world of Planescape: Torment, an early pioneer of non-binary moral choices in video games.)


That’s my short list. Where are you Forgotten Realms loyalists? Where else did I miss? Argue your favorite setting in the comments below.