Warlocks are the magic users who cheated their way through Final exams. They’re a really cool class who have made a Pact with a powerful entity, for some greater purpose; be it their soul, influencing events in the mortal plane for their chosen patron, or even cookies. A fun part of building any Warlock is developing a backstory for who this person was before they made the Pact, why they thought it was a good idea, and even what the terms of the Pact are. Even though Warlocks come with some great character building baked into the class, make sure you check out our tips for new roleplayers to make sure you have a character that is both interesting and fun to play.

Warlocks have a ton of variety and customization available with their 3 different Pact options, as well as their 3 possible Patrons. The best part of a game like D&D is that there is no “best” option; just the one you like the most. When selecting your Pact, keep in mind that both the Pact of Chain and the Pact of the Tome lend themselves to staying out of the fight and using Cantrips and ranged options to contribute. Pact of the Blade allows you to fight any way you want; just because it is called Pact of the Blade doesn’t mean your Pact weapon can’t be a bow.

In terms of your Patron options, each one should influence the way you play your character. A Fiend will have different goals than an Archfey, and this will influence your character. Each of the Patrons offers an expanded spell list, as well as benefits for being in their service. 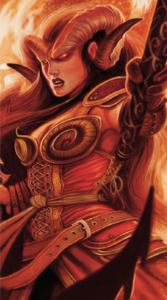 Warlocks are magic casters who use Charisma as their main spellcasting ability. As such, Charisma needs to be your highest attribute. The best part about having Charisma as your primary attribute, is that it buffs all of your incredibly useful Charisma skills by default (like Persuasion). If you select either the Pact of the Chain or the Pact of the Tome, Constitution should be your next highest ability as you are going to be spending most of your time lobbing Cantrips. For Pact of the Blade, make sure you pick either Strength or Dexterity, based on the type of weapon you plan on using. Your statistics breakdown should look like this:

If you are using Pact of the Blade, it should look like this:

If you choose Dexterity to be your second place attribute, bump Wisdom up a spot to make sure you gain the bonuses to your Insight and Perception which are way more important than Strength. 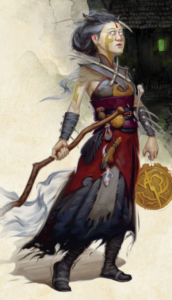 Warlocks have a much more limited number of spell slots than all other dedicated magic classes. This means that they need to rely on their Cantrips, and at later levels, their Eldritch Invocations. At first level, Warlocks know 2 Cantrips and 2 Spells. Unlike spells, selected Cantrips cannot be swapped out at later times so make sure you are happy with the ones you select.

The first Cantrip every Warlock should grab is Eldritch Blast. It’s a fantastic Cantrip with an incredible range and a great damage dice. The other reason this is a must-have spell is that Warlocks have three different Eldritch Invocations that improve Eldritch Blast in some way. As these Invocations are always on, being able to improve this Cantrip is a huge reason to select it; even if you plan to run Pact of the Blade and stab things, Eldritch Blast is a great option. Ask your Barbarian friend, sometimes you can’t reach the thing you want to stab and this is a great backup. Considering Warlocks are Charisma based casters, my next recommendation is Friends. Gaining advantage on all of your Persuasion attempts can be the difference between a positive or a negative outcome. Sure, the target knows you used magic on it, but you’re the kind of person who makes Pacts with powerful entities, future planning was never a strong suit.

For this article, I am not going to consider any of the expanded spell lists from your Patron. Feel free to trade either of these options for those presented with your Patron. Because Warlocks have so few spell slots, you should look for spells that have prolonged effects or longer durations. There’s no sense using one of your two spell slots for a quick, one off effect. The first spell every Warlock should have is Hex. This has a concentration time of an hour, deals additional damage every time you attack them, only costs a bonus action to cast, and allows you to hex a specific ability which imposes disadvantage on the target every time they make an ability check (using the hexed ability). The best part is that you can curse a new creature if the target is ever reduced to 0 hit points. Cast it early in a combat and you can hex every single creature you fight.

The next spell you should grab is Arms of Hadar. While there are better multiple action spells (like Witch Bolt), Arms of Hadar does not require concentration, and thus won’t end your Hex spell early. It also combines with Hex quite well because you can Hex a creature’s Strength before casting it. The other great thing about this spell is that it is an area of effect spell affecting all creatures within 10 feet of you (including allies!) and they still take damage if they pass the save.

Do you have any tips for new Warlocks? Let us know in the comments!