We all know that ONE guy.

You know, the kind who gets angry at everything. Beer gets spilled a touch as it gets placed on his coaster? Rage. Slightly held up in traffic? Rage. The good news is that there is a class in D&D where that inability to simply function in normal society pays off. Welcome to the Barbarian, where you are surprisingly resilient and it pays to get really, really angry.

Barbarians are a really fun class in D&D. They forego all of that wussy armor and training and favor a much, much more direct approach. Hallmarks of a Barbarian are mountains of hit points and really big, heavy weapons. Because a Barbarian and their skills are 100% geared towards combat, make sure you check out our tips for beginner roleplayers to make sure that your character has all of the hooks and depth to provide an enjoyable roleplay experience. D&D isn’t always about combat and expecting it to be that way is going to be disappointing. 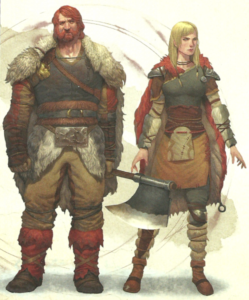 Barbarians are unique in that they are the only class I ever recommend NOT taking your highest ability score and putting it into your main combat stat. Instead, Barbarians should take that highest attribute score and put it straight into Constitution. This high constitution will ramp your hit points up to pretty ridiculous extremes in short order (you do have the highest hit die in the game at D12), but it also feeds into a Barbarian’s Unarmored Defense ability. When you are not wearing armor (you can still wield a shield for that sweet +2 AC), instead of having a base AC of 10 + Dexterity Modifier, the Barbarian gets a much more impressive AC of 10 + Dexterity Modifier + Constitution Modifier. A really high constitution allows your Barbarian to cruise around, mostly naked, while having more hit points than anyone else in the party and an AC that resembles wearing heavy armor, which they lack the proficiency to wear (and let’s face it, a stuck fastener like a button or zipper might send them into a rage).

Your next priority gets a little harder because based on how well (or poorly) you rolled, you might have a hard choice to make. Assuming you have 3 stats that all provide a modifier of +2 or more, I recommend taking your next highest and putting it into strength. All of your combat damage uses your strength so this is going to make life easier for you. But if your starting attributes are really bad (trust me, it happens) you might want to stick that second highest into Dexterity. This increases your AC thanks to Unarmored Defense but also adds to your Initiative so you are likely to act sooner in a combat.

In a perfect world, your stat breakdown should look like this:

For the non-physical attributes, I chose that order because Charisma is a universally useful attribute that helps you when you are not smashing things, wisdom gives both insight and perception, and finally, your Barbarian doesn’t need Intelligence for their go-to cantrip of choice; smash. 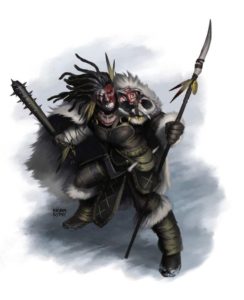 The Player’s Handbook contains two different options for Primal Paths. The Path of the Berserker and the Path of the Totem Warrior.

Path of the Berserker is the ideal Primal Path for those who think that the typical Rage a Barbarian can enter is just not enough rage. This path allows you to take additional attacks (using your bonus action to make another attack), become so mindlessly angry that you cannot be charmed or frightened, gain the ability to frighten others with your presence, and eventually, you can even retaliate with ANOTHER attack (using your reaction) when you take damage. The downside to this Primal Path is that this kind of Rage is hard on the body and you gain a level of exhaustion when your Rage ends. Make sure you can rest after a hard Rage like this or you’ll notice your character starts to really feel the effects.

Path of the Totem Warrior is less straightforward but no less interesting. Barbarians of this Primal Path seek to attune themselves with nature and start to take on the characteristics of their totem beast. They must select a Totem Beast when they choose this Path and as they level, they inherit more and more of the abilities of their chosen spirit animal. The Player’s Handbook contains three options for you to choose from, Bear, Eagle, or Wolf, but you are free to alter the type of animal to better match your background and homeland.

Do you have any tips for new Barbarians? Let us know in the comments!