Rogues are as intrinsically a part of D&D as Bards. There’s nothing like playing the sneaky character who disappears into the shadows at the first sign of danger. This isn’t to say that Rogues aren’t brave and they’re trying to retreat; odds are, they are just trying to get behind the enemy and try to get a killing blow that finishes the fight before it even starts. Rogues are masters of stealth and always use this fact to their advantage, whether they are killing an enemy or picking their pockets. If this is your first time playing D&D, make sure you check out our tips for new RPG players so you don’t end up with a character you don’t enjoy playing.

Statistics in D&D represent all of the ways your character interacts with the world around them. Rogues are a really unique class in that each Roguish Archetype is so drastically different. You should have a plan when creating your character to make sure you don’t accidentally use Intelligence as a dump stat (a statistic you place your lowest statistic into because it isn’t necessary to your character class) and then decide at Level 3 that you really want to be a sneaky magic user.

All Rogues are masters of stealth and want to make sure they prioritize Dexterity. This helps them disappear when they want to, and as long as you are using ranged weapons, or melee weapons with the “Finesse” property, you can add your Dexterity to all of your attack actions. Since Rogues tend to work outside the traditional confines of the law, you should definitely use Charisma as your next priority. If your Thief is caught by the city guard doing something illicit, you might need to deceive them in order to avoid jail time.  As such, your priority should look something like this:

For your Thief, I like to prioritize Strength as a top 3 statistic because there is a very good chance that you are going to be doing a lot of climbing to 2nd and 3rd floor balconies. I also feel that this sentence from the rulebook under Athletics describes a situation you may find yourself in, more often than you would like, “You attempt to…cling to a surface while someone is trying to knock you off.” 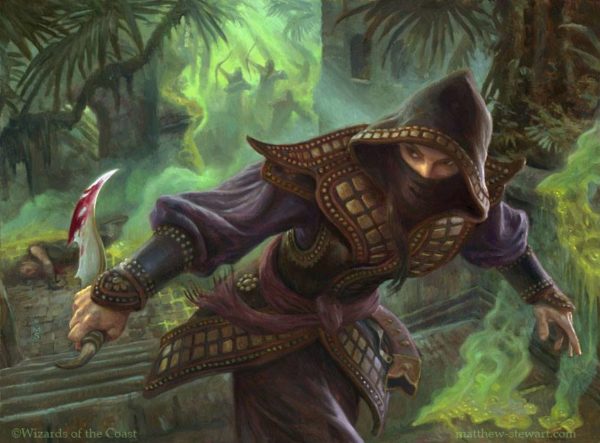 Assassins share some commonalities with Thieves. You want to make sure your top two abilities are Dexterity for your sneaking and stabbing, and Charisma. Assassins get a lot of incredible roleplay abilities that all focus on their ability to impersonate people, all in the name of getting close to their target. A low charisma can blow your cover and lead to all sorts of uncomfortable situations (like jail). Unlike Thieves, your 3rd ability should be Wisdom. Wisdom gives you a high Perception and Insight so you can tell if people are believing you, and pick up on guards trying to surround you before it becomes a problem. Your statistic breakdown should look like this: 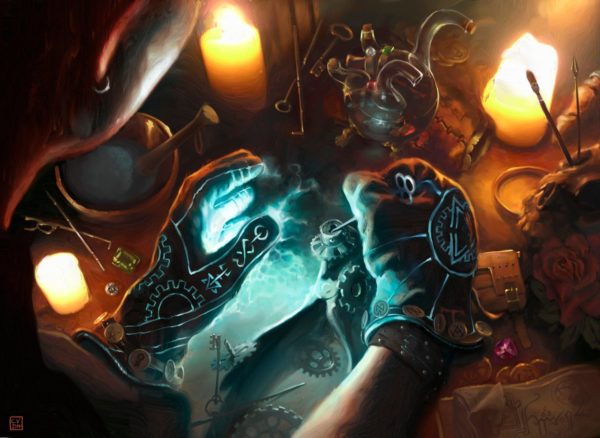 Arcane Trickster’s are Rogues who have trained in magic that can help them with their…extra-curricular activities. They use Intelligence as a spellcasting statistic and as such, this should be your second priority (behind Dexterity). Hilariously, Arcane Tricksters are able to pickpocket with their Mage Hand cantrip and this tends to put them a bit further from the scene of a crime, making Charisma less of a priority. As an Arcane Trickster, your statistics should look like this:

When you select this Roguish Archetype at Level 3, you learn 3 cantrips (one has to be Mage Hand) of your choice, and 3 1st level spells. Of these spells, 2 must be from the Schools of Enchantment or Illusion, while the 3rd can be from any school you want. With few exceptions, new spells that an Arcane Trickster learns must be from these schools. If you want to substitute one of these spells for a different school, feel free. Just keep in mind that Arcane Trickster’s can only change one spell they know when they earn a level.

For your two cantrips, I don’t recommend taking anything that attacks – you are a Rogue and your physical skills are going to do substantially more damage than a cantrip can ever hope to. I like either Minor Illusion or Prestidigitation as one of your cantrips because either one can cause a slight distraction, allowing you to slip away unnoticed. Incredibly useful. The next cantrip I would recommend is Friends. As an Arcane Trickster, you are less prone to being caught but with your Charisma being lower than a Thief or Assassin, Friends might just give you the time you need to get away. 1 minute is a long time for someone who can disappear into the shadows.

For your spells, I would start with Tasha’s Hideous Laughter. If the target fails their Wisdom save, they fall prone which gives you either a chance to slip away or to get your sneak attack on (you gain advantage on attack rolls against a prone target, so long as you are stabbing and not shooting them). Feel free to trade this one out for Color Spray which has similar results (easy to escape or gain sneak attack) but functions slightly differently. I find that Color Spray works best at lower levels but once you level up, those 6D10 just aren’t blinding anything, whereas Tasha’s Hideous Laughter gets better as you grow in levels (and your spell save DC improves).

The second spell you should take is Charm Person. This is a another great spell for roleplaying and can easily get a smooth talking (especially if you cast Charm and then Friends) Arcane Trickster past locked doors or out of a bind. Your last spell can be from any School and I am partial to Shield. It’s not a spell you are going to rely on but if you are already low on HP, it can literally be the difference between life and death.

Do you have any tips for new Rogues? Let us know in the comments!