The Competitive Card Game Is Reborn In Rise Of The Phoenixborn 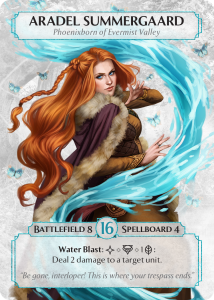 I am a huge fan of all things card game, so naturally when I saw Ashes: Rise of the Phoenixborn at last year’s Tabletop Day event, I just had to check it out. A few things struck me as I sat down to play: the first was the artstyle, a noticeably black and white motif but with these highly detailed and richly colored characters right smack dab in the middle of the cards. Secondly was the use of dice, which I quickly learned is the primary resource mechanic in the game. Last but not least, I learned as I spoke with the game’s designer, Isaac Vega of Plaid Hat Games, that Ashes was made to be played on a budget, unlike most other popular collectible or living/expandable card games.

Similarly to other competitive card games, the objective is to reduce the health of your opponent’s Phoenixborn to zero. You do this by attacking with summoned characters, casting spells, and triggering effects. Not too foreign of an idea, right? Players get to choose from six unique Phoenixborn in the base set, seven if you get the Dimona Odinstar promo character, and a total of nine if you pick up the first set of expansions, which came out yesterday. Each Phoenixborn has a different starting health value, a unique ability, special character cards that may be included in their deck, and a few other stats including their Battlefield and Spellboard limits. 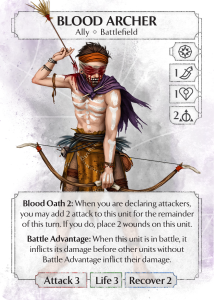 There are two types of characters, called Units, that can be brought into your battlefield; Allies and Conjurations. They both function very similarly once played, but they enter the battlefield in slightly different ways. Allies are drawn from your deck and played using your Magic dice, but Conjurations are played from a separate deck of cards using Ready Spells you drew and played previously. As mentioned earlier, each Phoenixborn has a Battlefield and Spellboard limit, which governs how many Units and Ready Spells that Phoenixborn can have in play at one time. Ready Spells are essentially permanent spells that can be casts over and over as long as you have the resources and they do not get exhausted. This is where Conjurations will come from, and can continue to spawn as long as you have the resources to do so. That said, you will rarely have a situation where you cannot play Units to defend yourself just because you haven’t drawn any.

Aside from many of its unique qualities that set it apart from similar games, one of my favorite differences is the way combat works. Like other games, you attack either an opposing Unit or Phoenixborn, but if you choose to attack an opposing Unit, the
defending player may choose to have 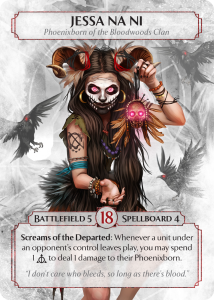 their Phoenixborn jump in the way and take the damage instead. Furthermore, if the defending player chooses to engage with their Units, they may choose not to attack back. The value in doing this is that if the Unit survives the battle, it may choose to attack or perform other actions on a later turn, which may be more advantageous.

Ashes’ business model is similar to those of other living or expandable card games, where the base set comes with all the cards you need, and each expansion gives you all new cards. Unlike the seemingly bottomless pit that is the gamble of random booster packs, Ashes gives you everything you need with your purchase. This makes it great for small groups or couples who want a good one-on-one battle. The rules for creating your own deck are very flexible and forgiving, allowing for a lot more possibilities with a modest pool of cards.

If you are anything like me and just have to play every card game, all the time, er-day, you should check out Ashes: Rise of the Phoenixborn. Try out the currently available characters, and see what the upcoming expansions have to offer. Tell us which are your favorites and send me your decklists so I can finally beat my friends. Hey, I said I loved card games, not that I was good at them.