We’ve talked before about the best games for two players. Two-player titles pare down excess and tend to provide the purest competition – and also amazing fun. But just because they tend to start smaller, doesn’t mean they can’t be expanded. In fact, there are some amazing expansions that really add to two-player games. Here are some great picks.

7 Wonders: Duel is the two player version of 7 Wonders. Not only that, but it’s basically the improved and better version. Duel revises the card drafting so that it works marvelously with two players, but also tweaks the rules on resources, military, science, and coins to make it a head-to-head brawl. It’s good on its own, but it now has an expansion: Pantheon.

Pantheon layers the gods of five different ancient peoples on top of the original game. In phase I, players who grab certain cards will add the gods to the Pantheon board. In phase II and III, the players get a new action. Instead of taking a card from the pyramid, you can now invoke one of the available gods. Each provides a new power that can be capitalized to great effect. Plus, by invoking a god, you skip your turn taking a card. So if your opponent backs you into a corner where you have to choose a disadvantageous card, you now have a potential out.

The expansion doesn’t really change the feel of the game, but it definitely shifts what’s possible. Not only do you get new options, but it now incentivizes you to reveal face-down cards. Revealing a face-down card gives you more control over what gods come into the game, and what their prices will be. What was once a detriment is now more nicely balanced. It’s definitely worth inclusion. 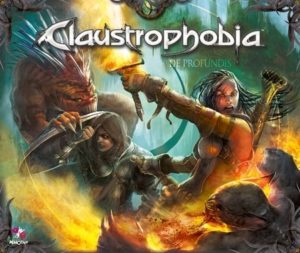 Claustrophobia is one of the most enjoyable boardgame style minis games. Taking place in a dungeon delve, one player takes control of the humans while the other controls the numerous, demonic trogs. While both sides use dice, they get used very differently and your experience on one side of the table is completely different from the other.

And the first expansion, De Profundis, took everything to the next level. For starters, it added a bunch more map tiles with new special abilities. This increases the variety and allows for some very tricky situations. Plus, it adds new units for both sides. The humans get the Sicaria, female assassins who have new and variable powers. Meanwhile, the other side gets Hellhounds. Stronger than trogs, but not as beefy as the main demon.

Throw it all in, and De Profundis provides a ton more tools for your Claustrophobia kit. You get new scenarios and new ways to experience the game. Plus, some of the best fan content makes use of this expansion. So more than just what comes in the box, you open yourself to a wide array of fantastic player-created scenarios.

RIVALS OF CATAN: AGE OF DARKNESS 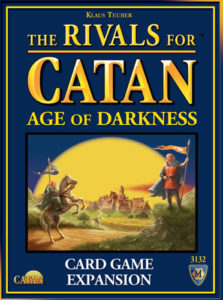 Rivals of Catan does an amazing job at distilling the multi-player version down to a two-player affair. The basics put the players in direct competition. While it lacks the trading of the original, that piece is replaced by a streamlined setup and more than a few event cards that create strong interaction. It even comes with a few modules you can add on for slightly different experiences.

And that’s where Age of Darkness comes in. The expansion is just three new modules for you to incorporate into the game. But it’s more than just a few new cards. It provides three separate and distinct experiences. If you want a bitter game that threatens both players, the Era of Intrigue module is a great addition. It makes the game difficult and constantly places you at each other’s throats. On the other hand, you could add in the Era of Merchant Princes. Now, the game becomes about how you can best manage your resources. Trade is the name of the game, and a fleet of trade ships is critical. And in the Era of Barbarians, both players have to deal with outside threats – which makes the strength advantage that much more contested.

Age of Darkness is great not just because you get more cards – though you do. It’s fantastic because each module provides a very different feel. Depending on the mood you are in, you can use the Rivals system to go in a variety of directions. All the while, the core game is there and consistently delivers fantastic gameplay.

What two-player expansions are your favorite?  Tell us about it in the comments.