April Is The Animated Steampunk Heroine You've Been Waiting For - Nerdist

April Is The Animated Steampunk Heroine You’ve Been Waiting For

Avril et le Monde truqué is coming to English-speaking audiences as April and the Extraordinary World, but its literal translation from French is actually April and the Twisted World. Such turn of phrase says a lot about the movie’s particular duality. It invites audiences into an animated alternate universe that’s at once menacing and whimsical, cynical and innocent, antiquated and futuristic. It truly is both extraordinary and twisted; and by that nature, a bit tricky to describe.

Of course, that’s foreign cinema’s appeal, no? The search for something genuinely unique. Not sequels, remakes, or genre neatly categorized in Netflix. And indeed, April is very much its own breed. 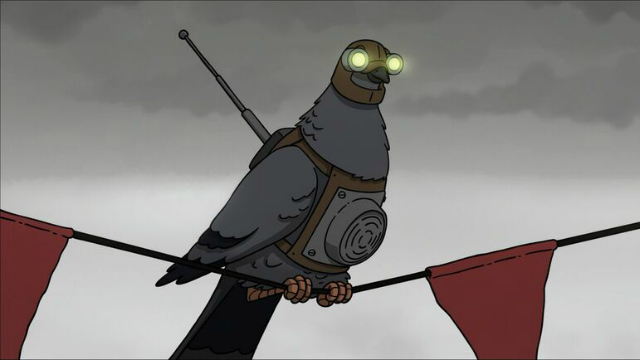 We could liken it to the Jean-Pierre Jeunet’s dark fantasy, City of Lost Children, or to the producer’s last comics-to-cartoon feature, Persepolis, but neither comparison is exact. This isn’t a strict adaptation. Its plot is devised by Jasques Tardi, and its cels meticulously recreate his art style, but its more of a tribute to the legendary cartoonist’s oeuvre, a new story in his universe. Many comics adaptations purport exact translations: this one actually brings Tardi’s drawings to life with all his off-beat personality preserved.

For those unfamiliar with French comics, the appeal’s much simpler. Here’s an animated steampunk adventure starring a young mad scientist, her talking cat, a slew of cyborg rats, living thunderclouds, and other mechanical oddities. Our titular heroine is April Franklin, a prodigious chemist from an entire family of genius inventors. Her parents disappeared when she was a little girl, and ever since, she’s been working tirelessly to complete their life’s work–a serum to make animals invincible.

Now, their last incomplete project is her only friend. Literally. Darwin, the aforementioned cat, was granted speech by the Franklins’ chemistry, and he uses this gift mainly to wax poetic and trade barbs with April. 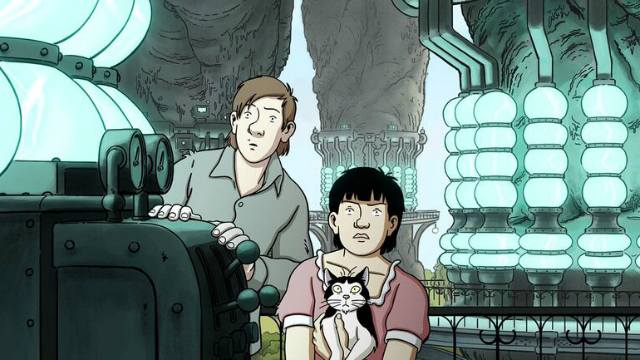 Wait: what in the world is the Franklins’ interest in super cats?! Well, it’s worth mentioning that this is an alternate 1941 where the Napoleonic dynasty never lost control of France and most technology breakthroughs haven’t happened (as their inventors all vanished mysteriously). The industrial revolution stagnated. Paris is choked in noxious smog. The global energy crisis revolves around lumber. A World War is being fought over Canada’s forests. And the Napoleons want an army of armed critters to bring victory to French.

Again, twisted and extraordinary. This is a family adventure with teeth: an “all-ages film” as it used to be defined. It’s unrestrained conceptually, but above the gratuitous nonsense that typically bumps a PG flick’s rating up. It’s also refreshingly unpredictable. Take trust: if you think you know where the story’s going when a handsome amateur spy literally drops into April’s life, you’re bound to get gobsmacked. It’s tough to discuss the film’s finale without giving away too much, but suffice it to say, it’s the kind of fun surrealism that’d typically get sanded out of a major animated production. 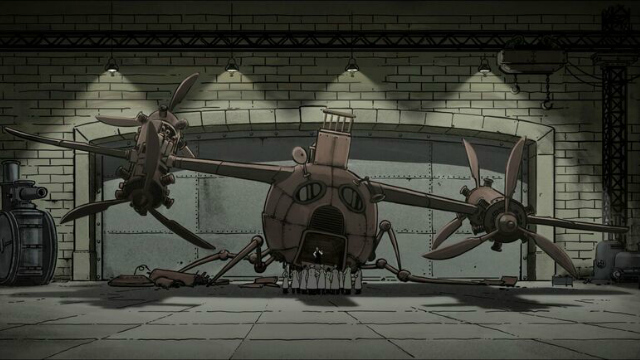 Anybody intrigued about Tardi should look into some titles from his prolific and diverse bibliography. Sadly, Euro comics haven’t penetrated America’s pop consciousness the way manga has. Most likely, you’ll know of Tintin because of the Spielberg adaptation, or you may have seen some Asterix volumes in a book chain’s graphic novel section. Still, finer comic shops should be able to hook you up.

And, of course, April and the Extraordinary World is well worth seeking out as it comes to America this Spring. It’s a perfect distillation of Tardi’s inventive satires, both complex and accessible, and it’ll be an excellent discovery for any adventurous cinephile, cat lover, or would-be inventor.

It’ll be “April in April” this year. Are you curious enough to check this out? Have you read any of Tardi’s work prior to this? Let us know in the talkback!