The 8 Scariest Are You Afraid of the Dark Episodes - Nerdist

The 8 Scariest Are You Afraid of the Dark Episodes

For many of us, our first foray into horror in any real way happened as the final half-hour of Nickelodeon’s edgy Saturday night programming block, SNICK. While definitely tame through adult eyes, the Canadian-produced Are You Afraid of the Dark? provided a surprising amount of actual scares in its simple anthology premise. Each episode provided new and endless chances to make new nightmares in our fragile little psyches and was hampered only by budget and our abilities to understand the thick Ontario accents.

Who among us didn’t see this show and immediately want to start their own Midnight Society to try to scare the Hi-C out of our friends? But, try as I might, I could never think of stories that had nearly the same degree of three-act structure, rising and falling action, and cliffhangers for commercial break as the seemingly genius kids on the show did. Also, why were they able to go into the woods at all-hours of the night and stay out until who knows when? Didn’t they have parents or guardians? Anyway, I digress. These are questions we never bothered to ask at the time; we were too busy being scared.

To celebrate the best horror show we kids ever saw, below you’ll find the eight scariest Are You Afraid of the Dark? episodes, in no particular order, and based almost entirely on memory and nostalgia (but what isn’t these days?) so your mileage may vary here. And please, feel free to leave a comment below or hit me up on Twitter with your favorites or ones that scared you the most as a kid. 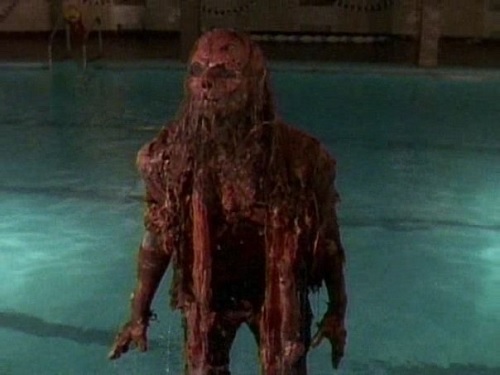 The Tale of Dead Man’s Float – As you’ll see with most of these entries, what made or broke (should be “brade” for that to work, but okay) the show was the effectiveness of the monster. The story of a school pool built on an ancient burial ground and the ghost that haunts it would be very dumb if not for the design of the freaky-ass water-logged ghost. By far the latest episode on the list (the premiere of season 5), this episode stands out for having a terrifying soppy-faced red ghost. This ep proved it’s not just urine to fear at a public pool. 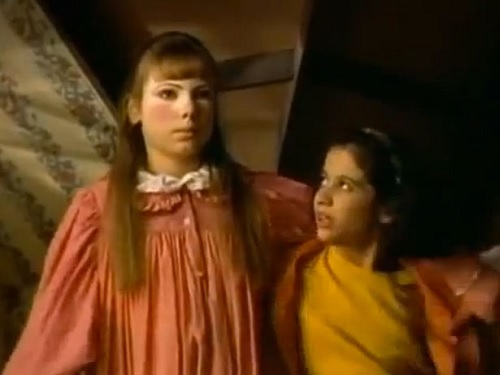 The Tale of the Dollmaker – There are certain unfettered truths in life, and one of them is that porcelain dolls are scary as fark. No thank you to that. This episode preyed on that fear, and the fear of losing oneself and creepy houses, too. A girl goes to spend the remarkably overcast summer with her aunt and uncle in the country and see her best friend Susan, but she learns that Susan’s parents moved away when Susan went missing. The house remains abandoned and after investigating, the girl finds a strange dollhouse in the attic that might have had something to do with Susan’s disappearance. On top of the main girl’s rather squeaky voice, the other thing that has never left me in 20+ years is the image of the half-doll Susan’s now-porcelain hands falling off her body. Traumatizing. 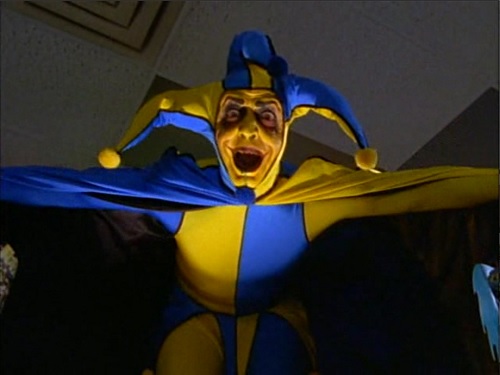 The Tale of the Ghastly Grinner – This is a great example of a dumb premise being saved by a truly horrific villain. A kid wants to be a comic book artist and, after visiting a weird and sinister comic book shop, gets the only copy of the only issue of a comic called “The Ghastly Grinner,” a Joker-esque clown villain who reduces his foes to drooling, cackling idiots. When the book gets wet, the boy puts it in the microwave to dry it out. A stupid idea for two reasons: 1) irradiating a book is not a good way to dry it out, and 2) it causes the villain to jump into the real world. The visage of the Grinner spewing green acid stuff from his pursed lips is the stuff therapy bills are made of. 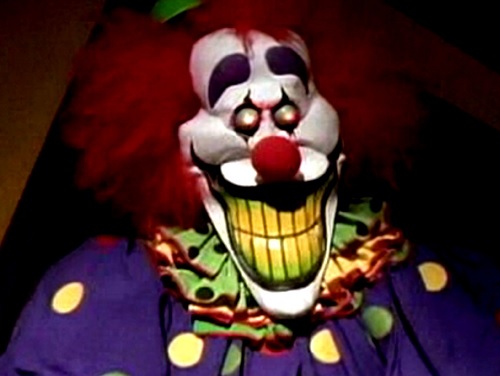 The Tale of Laughing in the Dark – The earliest episode on this list — and the second episode ever — “The Tale of Laughing in the Dark” also has one of the most lasting and upsetting premises. Another clown story, this one involves three kids who go to the spook house at the local amusement park and tell stories of the real-life Zeebo the Clown, who smoked cigars and stole a whole bunch of money, hiding it in the park until he was accidentally burned to death. His ghost is said to haunt the final room in the house. One of the kids doesn’t believe any of it and proves his bravery by stealing Zeebo’s nose from his animatronic visage in the attraction. Bad move. He soon starts seeing and hearing the ghostly presence of Zeebo in his empty house, and gets phone calls with a high-pitched man’s voice saying “Give it back…give it back…” As the carnival barker (who may also be Zeebo’s ghost) says, “it’s the most fun you’ll have in the park…when you’re laughing…in the dark.” 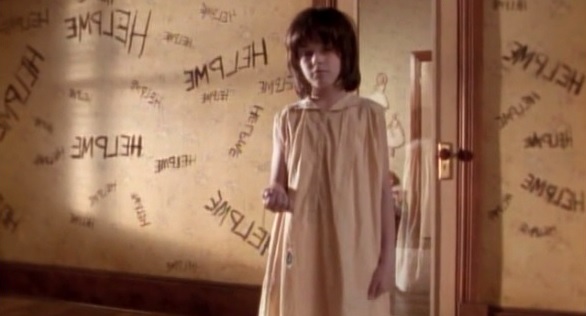 The Tale of the Lonely Ghost – Another early one, a nerdy girl goes to stay with her aunt while her parents are on an archaeological dig (???). Her cousin is a real stuck-up piece of work and refuses to let the girl hang out unless she spends a night in the supposedly haunted house next door. The ghost is of a deaf girl and she needs to find her mother, but in the process writes “I’m lonely” backwards on walls. The ghost girl herself is a very simple design, just pale makeup and a tattered white dress, but it’s enough to put the scares right up you. 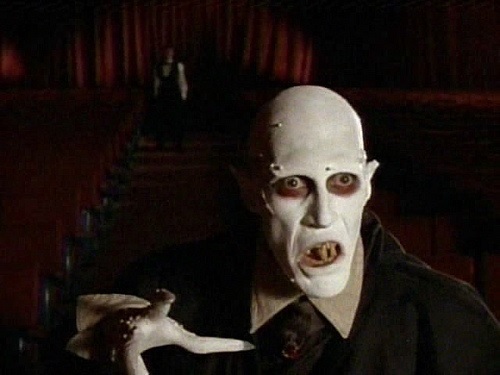 The Tale of the Midnight Madness – Who’d have guessed an episode about classic films would become one of my favorites? This one features the recurring character of the mysterious Dr. Vink who comes to a failing movie theater who promises to pack in guests if the theater shows this long lost vampire movie. The only catch? The theater also has to show any and all of Vink’s films he wants. Naturally, the movie theater begins to bounce back, but when the douchey theater manager refuses to hold up his end of the bargain, the two kids who work there begin to see what appears to be the Nosferatu coming off the screen. But it ain’t a hallucination. Another great monster and some very effective imagery. 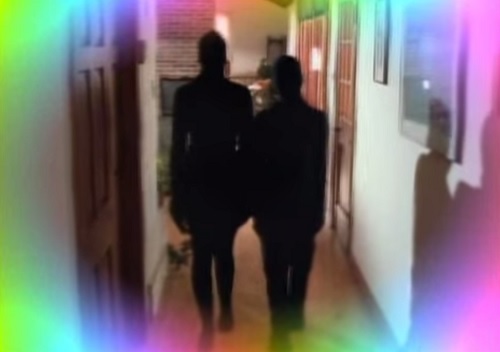 The Tale of the Super Specs – In retrospect, this episode is like the John Carpenter movie They Live with worse effects, but my little 8-year-old brain didn’t know that. This episode featured another recurring character, the magic shop owner Sardo (It’s sar-DO), who sells a kid a pair of X-Ray specs for his girlfriend. What he doesn’t know is that the seemingly cheap little glasses actually allow the wearer to see beings from another dimension who live among humans unnoticed. The beings were just people in black body stockings and face masks, but when I was a kid, they looked as scary as those dream monsters look in the documentary The Nightmare. 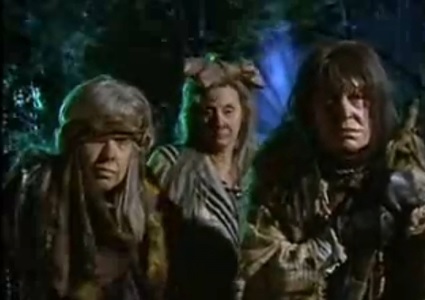 The Tale of Watcher’s Woods – I seem to remember this episode being most effective for a trio of loony hags and some exceptionally impressive lighting. Jewel Staite (who went on to be known for her role on Firefly) is a camper who gets lost with her friend in the titular “Watcher’s Woods.” Many years ago, three young girl campers got lost and were never found again, only their whistles remained, and another camper went insane, babbling about something called the watcher being out there. When the two girls in present day get lost, they find out that the Watcher is definitely real and there’s a lot of intensely creepy stuff out there amid the trees.

Kyle Anderson is the Associate Editor for Nerdist and lover of all ’90 Nickelodeon ephemera. You can find his film and TV reviews here. Follow him on Twitter!

TAGGED: Horror, Nerdoween, Halloween, Nickelodeon, Are You Afraid of the Dark