Pathfinder is a mighty RPG built on the foundation of classic fantasy games from the ‘70s and ‘80s. The only trouble is that not all of the monsters from that era of gaming were as epic as we’re used to. Some classic monsters are downright dorky. Here’s a brand new look at gaming’s goofiest goons—now for the Pathfinder Roleplaying Game.

We’re upping the ante this time, too. Paizo Publishing likes to go one step beyond when dealing with oddball, old-school monsters. You might have missed it, but back in 2010 they released Misfit Monsters Redeemed, a whole book turning these weirdos into truly terrifying foes! So now, instead of just laughing at them, we’ll throw in a little taste of what the Pathfinder treatment can do to these horrors!

As Paizo says, flail snails are “giant snails with maces for faces!” What I can gather is, back around the time the old Fiend Folio (1981)—where most of these monsters come from—was published, game designers just liked making monsters that made their players laugh. Or at least made them laugh as they brutally annihilated their players’ characters in the most humiliating way possible: bludgeoned to death by a horse-sized snail with a rhyming name.

Of course, the flail snail got a sweet upgrade when it oozed its way over to Pathfinder. Now more than just a monster with weapons for eyes, the flail snail is something of a gentle giant. They use magical slime trails, crisscrossing in the infinite shadows of the Darklands, to weave powerful enchantments and write epic poems to communicate their ancient knowledge.

The lurker above is the quintessential “gotcha” monster, right up there with the mimic, the cloaker, and… well, any monster that pretends to be something harmless at first glance. But then, most are easier to anticipate—mimics imitate treasure chests, which could be trapped, and cloakers appear to be mystical capes, which could be cursed, but who would ever expect… the dungeon’s ceiling? That’s right, the lurker is a giant manta ray camouflaged like the ceiling up until the moment when it bellyflops you to death.

How does the lurker get revamped in Pathfinder? Well, first you have to hear about two equally ridiculous old-school monsters: the trapper and the executioner’s hood. The latter is just like the lurker above… except it’s the floor that curls up and eats you. And the executioner’s hood is a mini version of the lurker that falls from the ceiling and wraps around your face like a little facehugger! Pathfinder turns all three of these creatures into different evolutionary forms of a monster called the lurking ray, a ravenous cave beast whose deadly presence attracts evil cultists who sacrifice innocents in exchange for clemency. Remind me to never take a vacation to the Darklands.

“I use Turn Undead!” replies the cleric.

“It doesn’t work. Also its body is really sticky and now it grapples you.”

What the heck was that sticky mummy? Ed Greenwood, creator of the Forgotten Realms, once criticized the adherer for being a monster that “[seems] to have no ecological niche, being merely ‘gamey’ party opponents.” And that’s why people think most of these monsters are too ludicrous to use. They break the players’ suspension of disbelief, but worse, “gotcha” monsters support the outdated notion that it’s the GM’s goal to murder the players by any means possible. Players and GMs aren’t enemies! They want to tell a story together.

Paizo puts a twist on this scotch-tape zombie by turning them into a race of mutant humans, experimented on by extradimensional creatures as fodder in a cosmic war. Their “bandages” are filament woven from the fabric of the ethereal plane, and the alien mind that whispers to them through this extraplanar material has driven them insane. 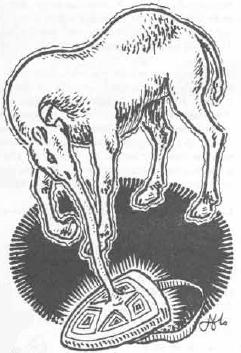 The disenchanter is a furry blue anteater-camel that really, really wants to eat your magic loot. And it wonders why he doesn’t it doesn’t get invited to parties!

The original disenchanter is, frankly, more boring and funny-looking than it is baffling and ridiculous. Paizo had their work cut out for them on this creature; boring is harder to fix than silly. It’s easy to make funny things scary, just look at clowns. In Misfit Monsters, the disenchanter has been recast as a bioweapon—a tool created by wizards to use en masse against enemy mages! That’s a fantastic plot hook, feel free to steal it.

The wolf-in-sheep’s-clothing first starred in Gary Gygax’s 1980 adventure Expedition to the Barrier Peaks as one of the many bizarre aliens in a crashed space vessel. It appeared as an innocuous bunny rabbit seated atop a tree stump, a breath of fresh air after going toe-to-toe with vegepygmies, killer robots, and froghemoths. Suspicious adventures noticed, of course, that the cute bunny was just a lure, not unlike the lamp of an angler fish. The true creature was the alien tree stump, which then used its tentacles to pull prey into its toothy maw.

Confession time, I think this monster is kind of cool. It’s weird, alien, and just hilarious enough to horrify. The Pathfinder team ran with its inherent weirdness and cranked it up to 11! Now the fearsome alien—in a twist reminiscent of Invasion of the Body Snatchers—uses its tentacles to possess creatures that fall to its power, using their bodies as lures. How will you defeat the alien menace if it’s using your friend as a shield? If it was possible to save them, could you figure out a way to do it without harming them?

But that’s just five of the classic monsters in Misfit Monsters Redeemed, which you can find here. Do you have stories of wacky monsters in your Pathfinder game, or of funny encounters turned horribly, horribly wrong? Let us know in the comments!

This Spotted and Striped Jellyfish Could Be a New Species