Join Dave & Molly and a panel of creatives as they work along with audience chat to write and finalize a short sketch during the show’s two-hour run time. Between episodes the sketch will be recorded and presented to the audience the next week! Tune into INT. Writer’s Room every Monday at 4PM on G&S Live!

It’s no surprise that many famous writers have spent as much time behind a Dungeon Master’s screen as they have a keyboard. Running a tabletop RPG campaign develops many of the same skills needed to be a successful writer. Good Dungeon Masters learn what their audience likes, but aren’t afraid to try new things. Good Game Masters are on a deadline to produce content on a regular basis to avoid having to send out that disappointing email cancelling game or delaying it to next week.

There are some great games that put everyone at the table in a writer’s room and help develop everybody’s basic writing skills through the use of writing prompts, gorgeous artwork and other . We’ve included our favorites in this article to get everyone’s inspiration pumping for any where from a few minutes to a few hours. 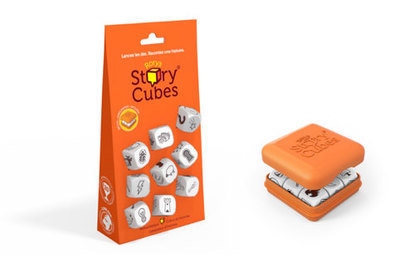 The old saying goes that a picture is worth a thousand words. These little dice, available everywhere from big box retailers to friendly local game stores, offer a handful of pictures every time they hit the picture. The basic rules are simple: roll the dice, and use the pictures to start telling a story. Maybe the story ends when all the dice are used. Maybe its a race for everyone around the table to collect dice to twist and turn the story for their own ends. The original set offers infinite combinations of story launch points with expansions that add more dice and more pictures for even more inspiration. For fans who already have a set or two, be aware that Rory’s Story Cubes are leveling up; they’ve started producing licensed sets for stories about Batman, Doctor Who and others. They are also in the process of developing their own RPG due out in October of this year.

Fiasco is a favorite of many folks here at Geek & Sundry. It showed up in an early season of Tabletop and has gone on to become one of the leading games of the indie RPG movement. The game offers an experience full of plot twists and betrayals in the time it takes to set up and break down a medium length board game. The first half of the game is rolling several dice and using them to set-up a complex web of people, places and things that focus on characters and their motivations. The game was initially focused on games that emulated the over-their-head crooks of Coen Brothers movies and Elmore Leonard books, but a robust fan community has created dozens of playsets across several other genres. Good characters doing interesting things to meet their needs are a universally good element of any story, whether its on a space station, a 13th century monastery, or a 1980s newsroom – even if it ends up being a fiasco no matter what. 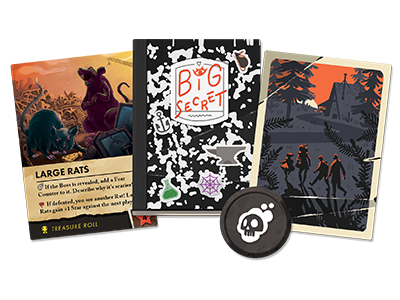 Stranger Things came out of nowhere in 2016 with a heady blast of 80’s nostalgia that revitalized the genre of kid protagonists going on a big adventure beyond their normal mundane lives. While there have been a few great RPGs that have capitalized on the show’s universal acclaim, The Siblings Trouble offers a storytelling experience for whole families that builds on player’s storytelling abilities. Players put together an antagonist deck at the beginning of the game and take turns drawing cards from the deck to tell the story of how the Trouble kids find a robot army in a junkyard or take down the Troll King in the caves nearby. There’s some dice rolling and card playing involved, but each card has a question on it that helps players develop the narrative as they play. How did the character use a comic book to defeat the junkyard dog? Why was the attempt to sneak past the cave goblins with a flashlight an epic fail? Regardless of whether players win or lose the game, they’ll still end up with a great story created while they played. 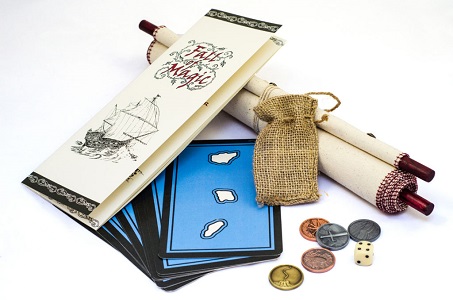 Sometimes, a piece of art can inspire an epic story. Anyone that’s seen the physical scroll used in Fall of Magic would be hard pressed to deny the beautiful scroll is a piece of art. but it’s not just eye candy; it’s a game to be played. Players tell the story of a group of adventurers escorting an all-powerful Magus across a fantastic land as magic is dying in the world. Each stop has story prompts that allow the players to add elements to their characters, define the powers and the role of the Magus and decide if magic truly falls or lives to be born again. The story literally unfolds before everyone’s eyes as the scroll rolls out new locations based on player choices. some locations call back to previous ones, while others shift depending on choices made in the early goings of the tale. Fall of Magic  also offers a digital option for groups scattered around the world who might want to tell this story together online.

Every RPG has elements that require a little bit of creative writing. These four put that element front and center, allowing the story to come first, while still having just enough game to inspire and push when a little momentum is needed.

What is your favorite writing-related RPG? Let us know in the comments.