In the five years since The 100 first premiered on The CW, the show has garnered a huge and passionate fanbase that has fallen hard for the young cast and their dystopian adventures upon the ravaged Earth. The season four finale saw the core cast split between worlds, so when we visited The 100’s Vancouver set we sat down the show’s end-game couple—Bellamy and Clarke a.k.a. Bob Morley and Eliza Taylor a.k.a. Bellarke—to talk about where the pair are six years into the future, how the two beloved characters are leading two completely new factions, and how that could affect their relationship forever.

The six-year time jump that kicks off season five has huge implications on the core survivors of the original 100, and for Morley it’s all about the power dynamics. “This season, it feels like there’s a couple of different shows going on, because there’s so many different groups and leadership groups and who’s in charge of what and where,” Morley said. “It’s interesting to see the power struggles between all the groups and actually who’s really in charge. This season has been tricky for me, like with Bellamy as well, for Bellamy coming from being Spacekru and knowing that he’s got the backs of those six or seven. Whereas when he gets back down to Earth that changes pretty quickly.” We find Clarke with a new charge, a young girl who’s become her family. The actress who brings her to life, Eliza Taylor, thinks the big shift has been a great one. “She’s gone through tremendous loss in her life, as we all know,” Taylor said. “We thought that she was going to be alone towards the end of season four, but now having this little sidekick who she loves with all her heart, a surrogate daughter type, she’s found some sort of peace and happiness until of course the prison ship comes down.”

Taylor also talked about her new role on Earth fleeing the prison transport. “It’s great because it’s a role reversal,” she said. “It’s like suddenly she’s the grounder who’s being hunted. It’s a really cool callback to the pilot.”

As for what the different crews will be facing, Morley teased a return to basics. “There’s definitely a lot of returning of Mother Nature type things—animals and creatures and critters and stuff like that,” he said. “That’s one of the struggles. And also, the elements, as well, and how the planet has changed because of praimfaya. In terms of the challenges on Earth, the threat other than the elements and environments…is always a human threat between the groups more than anything else,” Morley revealed. 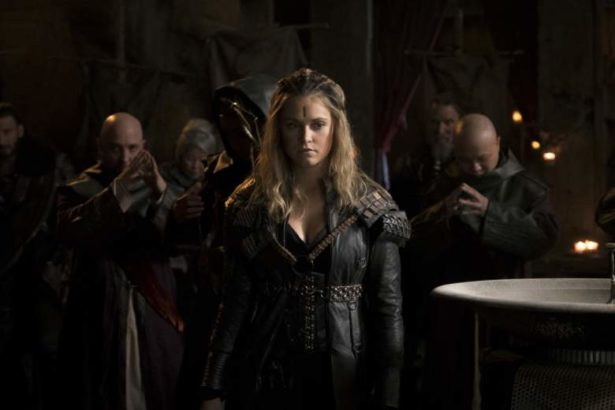 Taylor also hinted at some potential conflict between the crews. “I think a few have new loyalties, a few are the same, [and] there’s a couple in particular who are very, very different,” she said. “But there’s still going to be that bond and that sense of family. I can’t wait for people to see the actual reuniting of the entire group. It’s pretty cool.”

And what about that long-awaited reunion between Bellamy and Clarke? Morley had a lot of thoughts. “It’s obviously a huge shock for him,” he said. “She’s also focused on her unit, her family unit, which is Madi. And I have my Spacekru and they really deviate in that sense. There’s no longer this community of the 100…Everyone’s got their people now. There’s a lot of the ‘my people, your people’ stuff as per usual, but in this particular season, it’s very definitive as to who people are loyal to, so that dictates where their relationship is and where it goes.”

Are you Bellarke all the way? Only care about seeing more devastation wreaked on the survivors? Just love The 100? Let us know in the comments!

Television
Who Is the Villain in THE UMBRELLA ACADEMY Season 3?
Maryam Ahmad
5 MIN READ
SEE MORE