THAT TEXAS BLOOD Is a Delightfully Dark Debut (Review)

Image Comics has long been known as the home of exciting new talent. From the earliest days of the publisher, they’ve been carving out a space for themselves as the bad boys and often the best work that the company puts out reflects that. The first issue of Image Comics’ newest series That Texas Blood fits under that banner well not only as a horror tinged take on crime in Texas but also hinting at an exploration of masculinity, aging, and finding your place in an ever more unfamiliar world. 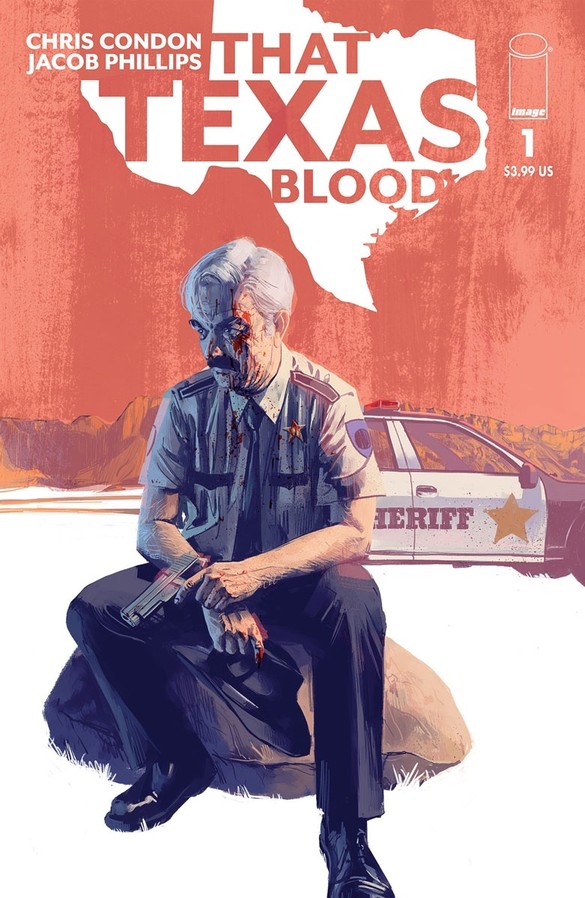 Coming from writer Chris Condon and artist, colorist, and letterer Jake Phillips, That Texas Blood is based on a series of short stories that became an undeveloped film script in which Condon wrote about the fictitious Ambrose County in West Texas. Joe Bob is the sheriff of the aforementioned locale and he’s just turned 75, though he’s not happy about it. For most of this issue we follow Joe on his routine rounds as he sweetly tries to retrieve his wife’s casserole dish from a friend. That dish soon becomes a vital part of an unfolding mystery that promises dark things for Joe and Ambrose County.

That Texas Blood doesn’t feel like it was adapted from short stories or an undeveloped script. Condon does a great job writing for comics and his power really comes from how well he crafts small character moments and builds atmosphere with the sharing of folkloric story tales between the people who inhabit the world. One of my favorite things that Condon does here is the addition of Joe’s wife Martha using the police walkie talkie to chat with him throughout the day. It’s a sweet almost irrelevant thing that showcases not only how much Joe loves his wife but also the usually slow pace of the day to day movements in Ambrose Country. 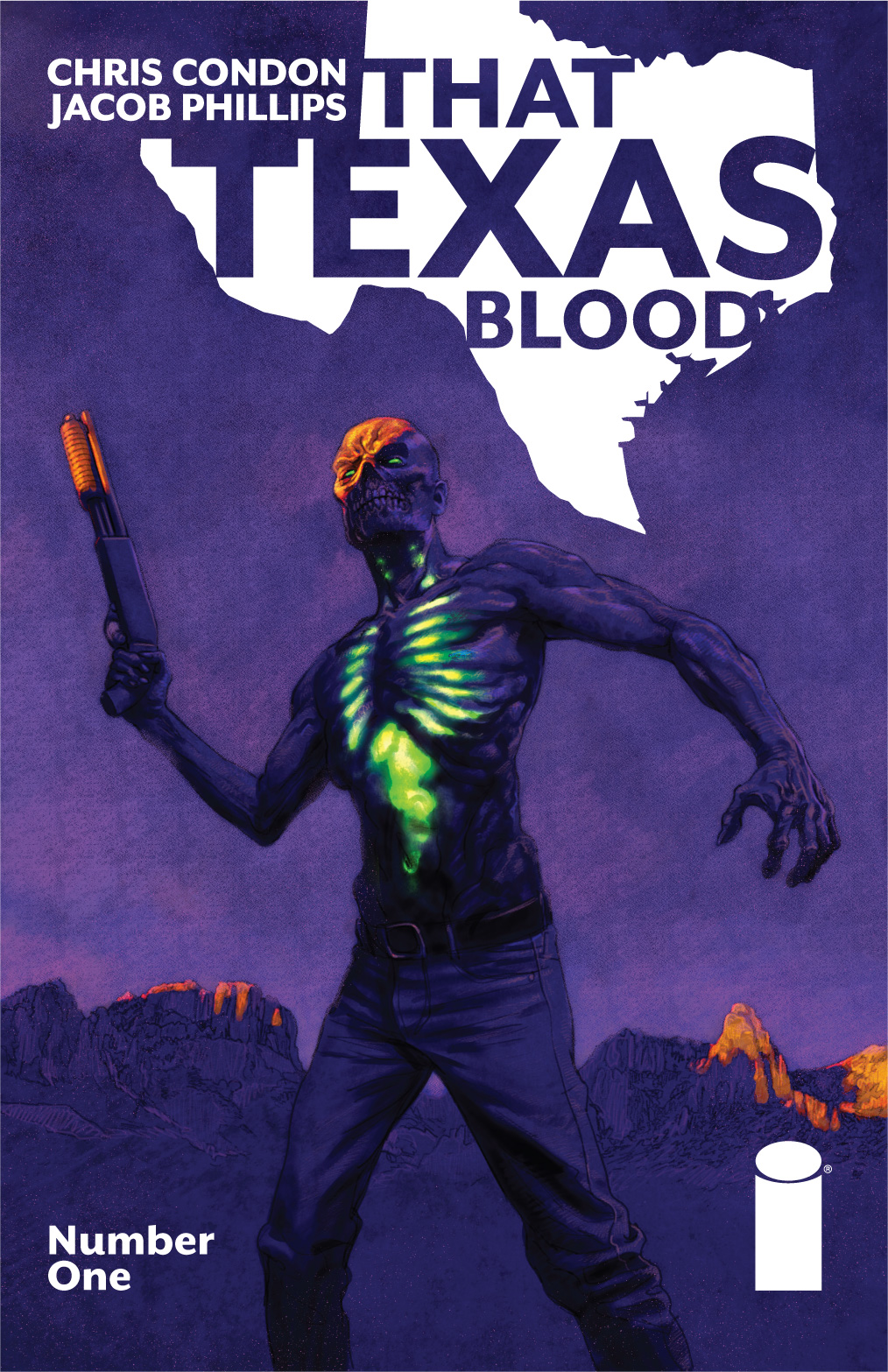 The real star here though, as is always the way with a beautiful comic is Jake Phillips. Phillips’ art is stunning, full of emotion, movement, and atmosphere. It probably helps that he’s also the colorist and letterer, allowing his style and eye for design to come through on every page. Speaking of design, the issue was designed for publication by Jake’s dad, Sean Phillips, who you probably know from his series with Ed Brubaker, Criminal. Phillips’ love of elevated pulp storytelling clearly runs in the family, but while the father and son do share aesthetic sensibilities Jake stands on his own here as a beautiful and imaginative visual force.

Something I really want to call attention to in this review are Phillips’ letters which are not only clear and concise but also a total pleasure to look at and pore over. Even when Condon stretches the amount of text I would usually enjoy reading on one page, Phillips crafts them into something beautiful. A great example of this is one of the best pages in the book as two men share a story over a campfire, the smoke stretches above the flames and the story follows the trail. It’s a simple yet striking way to make a page that in another pair of hands might have looked overwritten become one with the story that’s being told. As a huge fan of great sound effects there’s also a page here that is both beautiful and incredibly fun despite the dark event we’re witnessing, that balance is powerful and in this first issue it feels like Condon and Phillips are doing it very, very well. 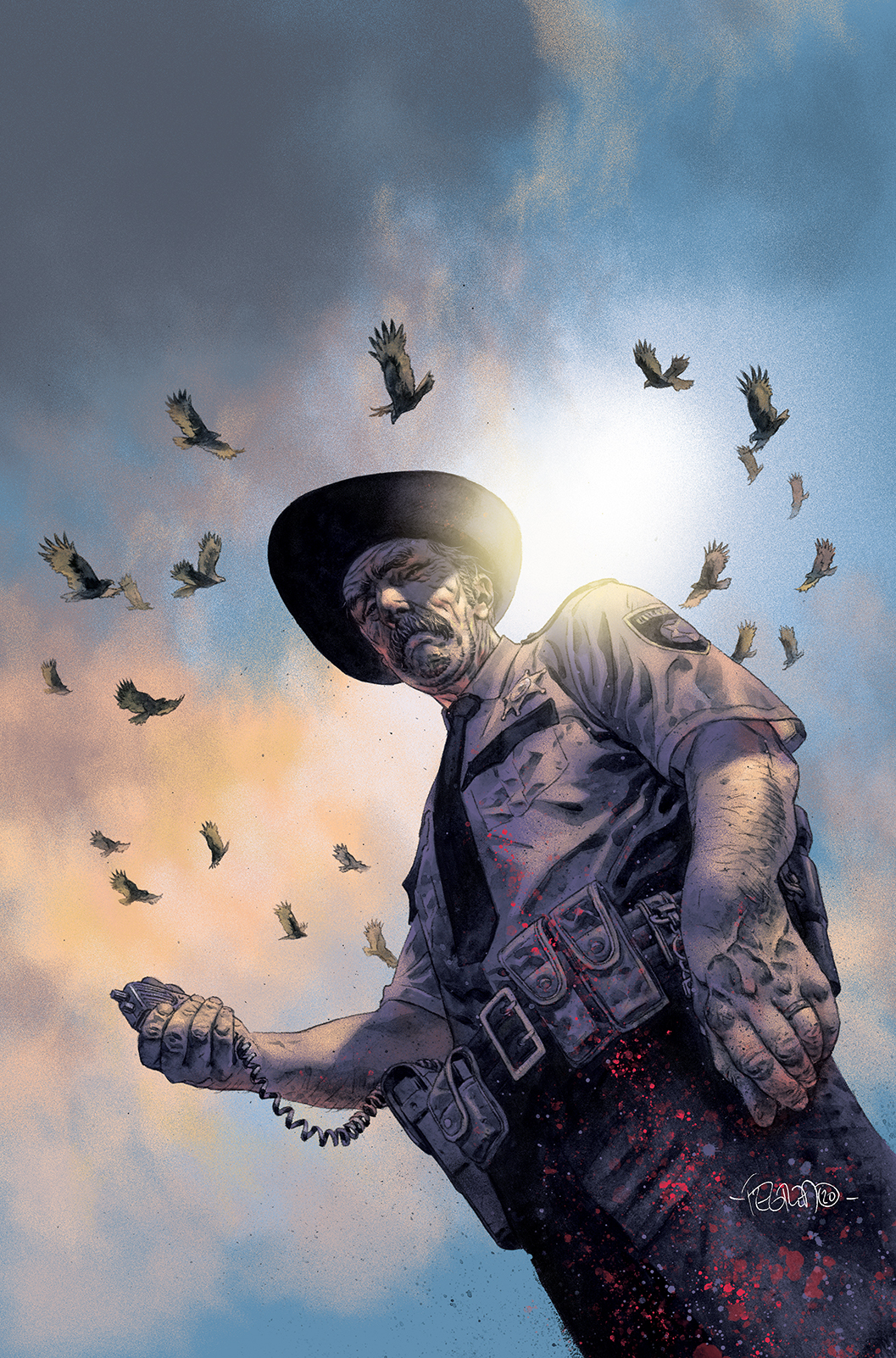 That Texas Blood feels like a distant relative of Jason Aaron and Jason Latour’s Southern Bastards, a comic that I think is really, really special. It’s a hard book to be compared to, but if there’s one lesson that I hope That Texas Blood takes from the former is representing the diverse reality of Texas, rather than the more traditional idea of the space existing solely around whiteness, especially as neither creator hails from Texas or the South. Of course, I only got to read the first issue of That Texas Blood so I am excited to see where the story goes and what Condon and Phillips achieve as they’re clearly a comic book match made in heaven.

That Texas Blood hits shelves in May and you can preorder it from your local comic shop now!