Tentacle Kitty and How Great Ideas Can Come From Anywhere - Nerdist

You know those strokes of brilliance we all get from time to time? There we are, changing a lightbulb, when we slip, fall, hit our heads on the toilet, and invent the flux capacitor. Ok, ok, that’s a Doc Brown reference, but you get the idea. We’ve all had ideas that came to us in a flash that we just knew were amazing. The bummer is, most times those flashes of insight come to nothing. I myself once had an idea that would have revolutionized carnival food forever—but I’m a writer. I don’t know the first thing about carnivals or deep fat frying. So I did nothing.

I never thought too much about that decision until I met John Merritt at New York Comic Con this year. John and his wife Raena are the co-creators of the darling phenomenon known as Tentacle Kitty. For the uninformed, Tentacle Kitty is pretty much what you’d expect. She’s got the head of a cat and the body of… something with tentacles. The idea for her literally popped into John’s mind in 2009, when Raena was studying to become a marine biologist (That’s why tentacles were on his mind. Everybody got that? I’m looking at you, Internet. Get your head out of the gutter). 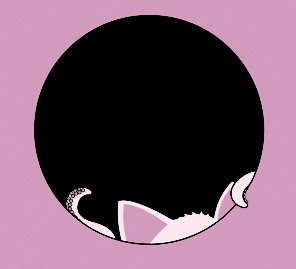 Instead of just letting Tentacle Kitty languish, John drew up a concept and gave it to Raena. John wasn’t an artist, by the way. He was user interface (UI) designer for Sony Bend Studio. Still, when Raena reported back to him that her friends were also in love with Tentacle Kitty, John knew he had a great idea on his hands. Even as his project with Sony crumbled around him, he pressed on with his Frankensteinian creation.

By 2011, the DeviantArt community was clamoring for Tentacle Kitty plushes. John figured out how to make that happen, and boom: Tentacle Kitty entered the third dimension. In 2012, the business of selling stuffed cat/squid hybrids became so all-encompassing that John had to leave his job in order to keep up with demand. The mythos of Tentacle Kitty continued to grow until, in 2014, John launched his own web comic. There was still no professional artist on his team, so John did the art himself and collaborated with Raena on the story.

Fast forward to today and Tentacle Kitty has not only been funded by a wildly successful Kickstarter, but John has just announced that there’s a CGI Tentacle Kitty movie in the works. In just over five years, Tentacle Kitty has risen from a simple idea to teetering on the cusp of worldwide recognition. So get out there, everyone. Follow those dreams and invent that time traveling DeLorean—even if you’re not a scientist. After all, you just might have the next Tentacle Kitty on your hands.

Check out the gallery below for a glimpse of what makes Tentacle Kitty so special. If you like what you see, there’s also the 19-page web comic to catch up on. As for me, maybe I’ll start researching that food frying technology after all.