A common piece of advice filmmakers offer to aspiring artists nowadays is something like, “Go make something! You have a camera in your phone! There are fewer barriers than ever to making art! Just go do it!” All well and good, but when you look at the movies you actually admire and want to make, chances are they were either made for millions, or by maxing out credit cards and personal favors. Except Tenacious D in Post-Apocalypto, which was made by four people for $53. That figure is a direct quote from Jack Black, and it sounds entirely plausible. This hand-drawn feature makes the original South Park “Spirit of Christmas” short look like Avengers: Infinity War by comparison. With virtually no actual animation involved, it is, as Black and Kyle Gass themselves describe, a slideshow with a radio play. It’s also a musical, and with repeated pictures of sexual penetration, it borders on being pornography too. If it were made by anybody less talented than Black, it might not work at all, but while the non-moving drawings will try the patience of a viewer, it mostly works. Designed to be shown on YouTube in six segments, it’s first doing a limited run as a theatrical feature, beginning with the LA Film Festival and continuing through the Alamo Drafthouse chain. 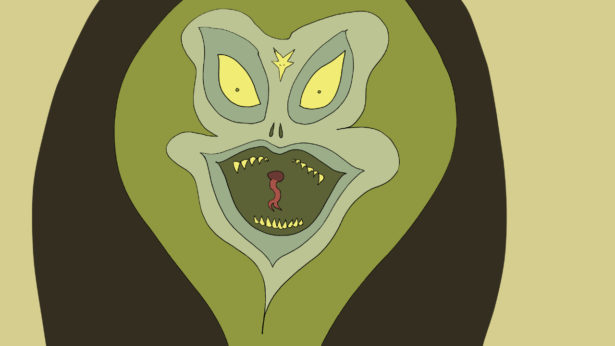 While the movie ties in to the band’s new concept album, it seems that the idea for the movie came first. After the initial segment was produced, and Black tried to pitch it to networks (among them Netflix and Adult Swim), nobody would take it. And that’s even after they leaked word that it was an official Pick of Destiny sequel, which it is only in the same sense that Three Stooges movies are sequels to each other. So they made it themselves, mostly improvising and letting their editor cut things down into something resembling a structured story. Black does nearly every voice; Gass only plays himself and a Klansman.

The plot involves Tenacious D surviving a nuclear war (in a fridge, of course), mating with and escaping from a tribe of angry amazons, going on a jaunt into space to meet Elon Musk and Richard Branson, taking a trip to Washington DC to confront Don Trump Jr., and meeting the 80-year-old future self of Black’s newly conceived child, who sends the Terminator back through time to help them. Yes, THE Terminator, which allows Black to indulge in an Arnold Schwarzenegger-meets-Werner Herzog voice that’s funnier than most such impersonations. And there are so many drawings of genitalia along the way that even Jonah Hill’s character in Superbad might raise an eyebrow. The YouTube versions are definitely going to have to be age-restricted. 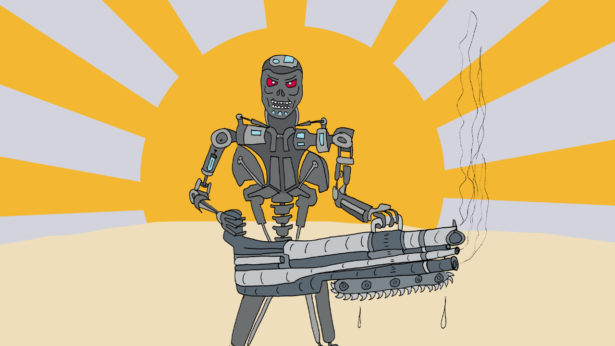 It’s a challenge to watch a movie that’s made almost entirely of stills; there’s a reason why perhaps the most-acclaimed such film, 12 Monkeys‘ inspiration “La Jetée,” is a short. But music makes it easier—somehow music videos have wired us to expect more formal experiments, or maybe it’s just that these particular songs are rocking (Tenacious D’s first ever hip-hop song debuts here as well), funny, and stem directly from the story we’ve been seeing. Motion comics are enough of a thing now that you can think of it that way, if doing so helps, and Tenacious D pull it off probably better than most could, though they’re likely to inspire many more imitators to try. Black and Gass are consistently entertaining when allowed to be themselves, if sometimes overly dirty-minded at times. By having all the new tunes stem from one story, they may be guaranteeing themselves actual album sales rather than just single-song downloads, and that’s a great strategy.

You can catch the first episode on YouTube starting September 28, with a new episode dropping every week up until election day. Yes, their goal was to be more explicitly political than usual, as the duo feels like the current chief executive co-opted their “greatest in the world” shtick without remembering to stick tongue firmly in cheek first. Still, it really only gets as partisan as “Don Jr. isn’t likable” (his dad is not a character in the story, though he is addressed by implication). If that’s offensive, the band probably offended you with something else already, like the song “F*** Yo-Yo Ma,” which didn’t make the final cut.

If you’re not a fan, Post-Apocalypto will not be the thing that wins you over. If you are, it’s as pure an experience, unfiltered by additional executives and voices, as they will ever give you. Probably everyone will wish it had been more animated, however, but you definitely see all $53 up there on the screen. Album expenses billable to Sony as a separate thing, one suspects.

Luke Y. Thompson is a member of the LA Film Critics Association, who attended Tenacious D’s Festival Supreme all four years. You can find him on  all the  usual social  channels. 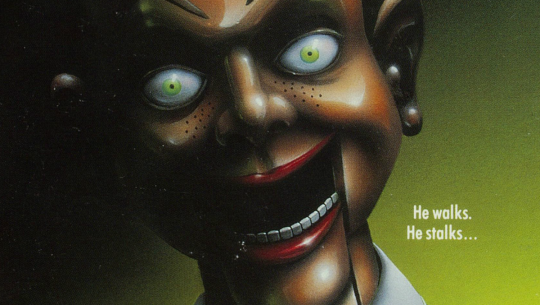