Tail Feathers, much like its predecessor, Mice and Mystics, is all about telling a great story. Tail Feathers isn’t a cooperative game, though! You fight your opponent in the air and trees, trying to achieve a plot objective. To show that the storytelling capabilities of this new game setting aren’t crippled by the game’s competitive play, I wrote a short story based on one of my playthroughs.

To set the stage a bit, Tail Feathers comes with several 2-player scenarios that pit the Downwood Militia against the Vermin Raiders. Each scenario offers a different board arrangement, army composition, and objective. Destroying your opponent’s nest usually results in a victory as well.

Stab in the Dark

“It seems like we’ve spent our whole lives looking for a home. Maybe that’s the way of the woods. You’re predator, or you’re prey. We are rodents, so many would have you believe we are the latter.”

I scratched a map onto the bark before continuing to speak.

“I’m telling you now that we’re not. Those dirty shirks have been driving us from these woods since we arrived and all we want is a home, a place to eat. We are not prey. And tonight, we will show them that!”

Still scribbling, I explained the mission. It was simple. It needed to be. Our enemy is sly. If there is a hole in the plan, they will find it and exploit it.

Each round, players may choose a secret mission, such as rescuing a bird or besieging an enemy tree. If the mission is successful and kept a secret, you’ll get to do something special. Be careful though! Birds can swoop down on your mice to uncover missions, and if they do, it usually means the minis you sent on that mission will take damage!

With the mission layed out, I gathered my unit and we descended our tree. We crept across the clearing, only visible to our birds’ keen eyes.

Halfway to our target, I signaled. Our birds took flight. Under the soft glow of the moon I could see our enemy take the bait. They launched their own flock to intercept.

We closed the distance to the enemy’s tree and started to climb. I couldn’t help but glance to the sky. Even when locked in battle, the birds moved with such grace. They spiraled each other in a deadly dance, moving in time to the clash of their barding.

The birds of Tail Feathers are A-MAZ-ING. Each one has a unique model and they are exquisitely detailed. They rest on articulating stands that can be tilted to indicate the direction they are flying. When you want to show that a bird is going to veer left, simply tip the bird’s left wing down. 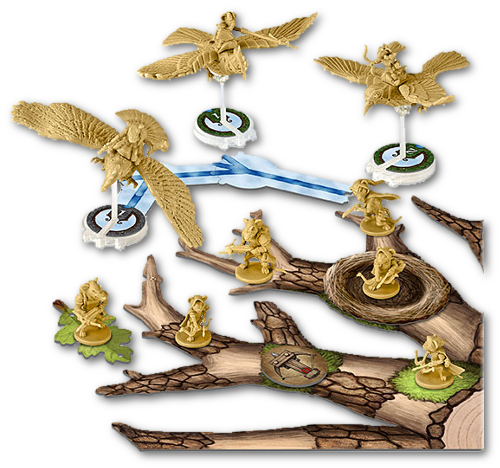 After a bird has been tilted, approximate its flight path. Say the lengths of the path tokens you wish to use for the bird’s movement (e.g. “long, short, short”). Short path tokens result in tight turns. Long tokens result in gentle turns and more distance traveled. Place the path tokens in front of the bird and move the bird to the end of the segments. If you guessed correctly, you’ll end up where you wanted. If not, then hopefully you at least avoided flying into a tree.

Hiding below the branches of our enemy’s base, I watched the massacre of our flock. Nearly half of them had been grounded already.

This night, this battle, would decide our fate. After these losses we would not be able to fight off those cursed finks in a show of force. Of course, force isn’t our only option…

Suddenly, we got the opportunity we hoped for. Their foot soldiers had just spun away upon leaves in the wind. They thought to put an end to us tonight as well.

The greed of our foe would be their undoing. I whispered the order, “Now!”

Combat in Tail Feathers is practically identical to Mice and Mystics: the attacker and defender roll some dice and the difference between the attacker’s hits and the defender’s blocks determine the damage dealt. If you’re unfamiliar with Mice and Mystics, I highly recommend watching the two-parter episode about it on TableTop.

And yes, the mice really can jump onto leaves and zoom across the board in Tail Feathers! It’s a risky maneuver because a bird can easily intercept you while you’re in the air, but it’s hilarious and sometimes worth the risk!

We leapt atop the branch. Half my crew provided cover while the rest of us hacked away at the nest. Without a nest, the birds would roost in another part of the woods and their varmint riders would have no choice but to go with them.

Our attack went off without a hitch. We had lost many of our riders, but our home would soon be secure. We could recoup our losses.

I kicked the remaining nest off the branch and it scattered into the night. I laughed and shouted, “Mark this day foul mice, for you have been bested by Staborah and my Vermin Raiders!”

As our enemy turned to attack me in revenge, one of my riders pushed through their flock. He hoisted me up as he passed and we glided free into the sky.

In Tail Feathers, even if you’re playing as the good guys, you won’t always win. In fact, sometimes the dice are just going to hate you and not give you the rolls you need. The good thing is that no matter how the game goes, you’ll always walk away with a good story and a smile.