The world’s most fearsome fighting team works hard. Even heroes in a half shell have to rest sometimes, though. But how exactly do the Teenage Mutant Ninja Turtles unwind? A delightful new set of limited prints titled “ Turtles’ Day Off” is here to answer that question. The collection shows how each of Splinter’s boys relaxes at home. 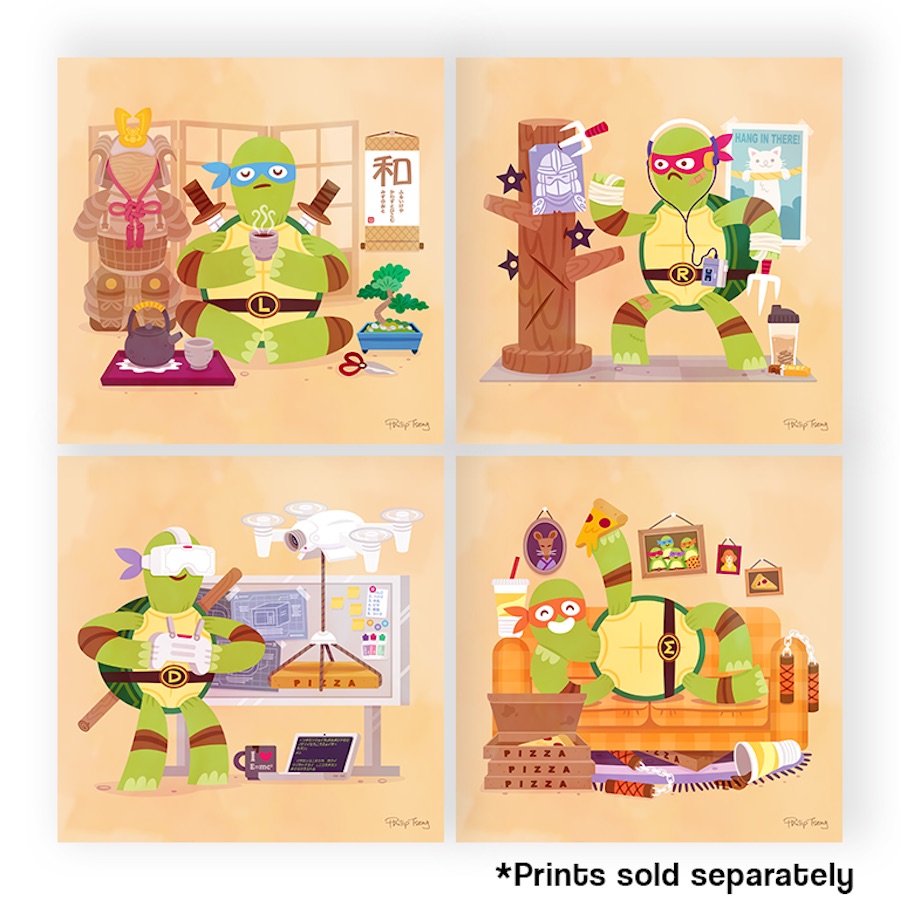 Skybound, iam8bit, and Nickelodeon have teamed up for the third release in their Lean/Mean/Green: A TMNT Limited Edition Art Print Series. This time turtles power is off as the guys kick back at home. And each is doing it alone in their own unique way. Designer-illustrator Philip Tseng has managed to fully capture all four of them in a manner that highlights who they are whether they’re fighting evildoers on the streets of New York City or staying home on a quiet weekend.

“In ‘Meditate,’ Leo channels his inner Zen warrior next to a perfectly pruned Bonsai tree (a sly reference to a scene from the 1990 live-action film). In ‘Gym,’ Raph blows off some steam in the gang’s dojo, sai in hand, headphones snugly in place. In ‘Chill,’ Mikey takes the day off in stride by vegging out on the couch with a slice of his beloved pepperoni. And in ‘Tinker,’ Donnie throws a pizza party for one with the help of a friendly neighborhood drone.”

The collection is also features references to other characters like Shredder, Splinter, and April O’Neil. Thanks to a playful tone and gorgeous aesthetic, though, the collection also feels wholly original.

These 10 x 10 inch prints are Giclée quality. That means they are museum quality prints “made from archival, fade-resistant ink and acid-free, fine art paper.” They are also each hand-numbered and signed by the artist. Each is available for $30, or $120 for a complete set of four. However, they won’t be around long.

This is a limited timed-edition series. You can only order them until November 30. Once that day comes and goes, no more will be made. So if you want to always be able to kick back at your home with them, don’t delay. The last thing you want is for the Turtles’ day off to make you stressed out.