Going above and beyond fan predictions, NECA is continuing their tradition of releasing 7-inch scale Teenage Mutant Ninja Turtles sets for Comic-Con in a big, big way. Fans predicted that they’d downsize their 1/4 scale figures for a box set, as it would follow in the tradition of the last few years with the company releasing various other Turtle sets in the smaller scale they’re only legally allowed to do for American conventions, due to a licensing loophole. Last year came a set of animated series Turtles. The year before that, video-game Turtles. It was always likely to be the movie Turtles’ turn this year… But if you were just expecting downsized versions, think again. Sporting more articulation than their larger brethren, and alternate bandanas that are sculpted in dynamic poses rather than cloth, these Turtle boys aren’t getting cut any slack. And while you can buy just the Turtles, there’s another option… How about an 18-inch tall street diorama from the movie, made to display up to 30 NECA (or similar) figures? It’s two feet wide and a foot deep; slide off the cardboard backdrop to place figures behind the windows for extra levels of depth. The diorama is not sold separately yet, though a version of it that is not TMNT-specific in design may be available later. The Turtles will only be available at San Diego Comic-Con International, either in a set by themselves ($125, limited run of 5000) or packed with the diorama ($250, limited run of $2000). Both come packed in a box that pays tribute to the original VHS sleeve. If you’re wondering where the Foot Clan is–they’ve featured in the last two box sets–wait till next year. The quarter-scale versions of Shredder and Foot Soldier come first, and they’ll be unveiled at the Con itself. 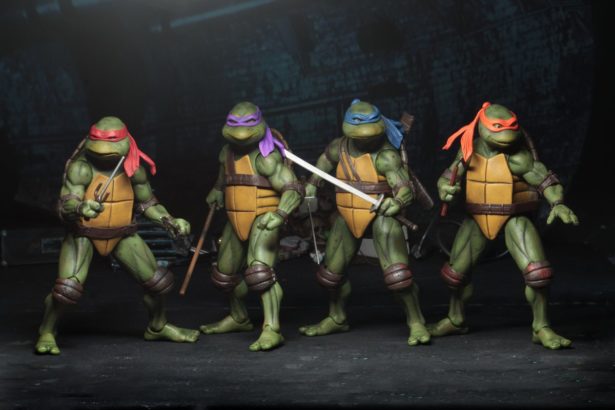 Can your bank account handle the T-U-R-T-L-E power? Cowabunga down to comments and leave us your tubular thoughts.

More toys for you!