Full admission up front: I’m not too regular a tabletop gamer. Not that I’m a complete neophyte: I’ve played my share of Catan; enjoyed a role-playing sesh every so often; and can grok the qualities of twenty-sided die, charisma points, and the ambivalent state of morality that is Chaotic Neutral. Still, one can only be devoted to so many hobbies, and my free time’s long been committed to other pastimes – like watching anime. So high are my otaku stats, in fact, they’re what brought my name up for this highly specific, and thoroughly geeky, social experiment: a gaming novice getting hands-on with a Dragon Ball dice game.

I’ve followed Goku’s adventures since before I could read and, as an adult, have oft reflected on the qualities that have made DBZ such an enduring hit. And, well, there’s no getting past the signature appeal of its epic battles. Many can find the season-long blow-for-blow tedious, but many more (including me) find it makes the series a real experience. If you’ve slogged through a prolonged slugfest against an alien overlord, then said despot’s eventual vanquishing will feel soooo much more cathartic. 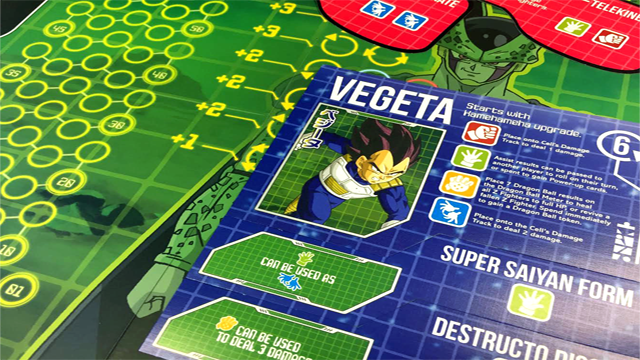 Perfect Cell is crafted around that specific part of the DBZ experience. Half the board is devoted to the vital stats of the insectile Big Bad the game is named for. You start off facing a daunting tower of 75 points representing Cell’s health–much like the 50+ episodes comprising the actual Cell Saga–and brace yourself for the imposing challenge of chipping away at this seemingly-invincible enemy.

Also essential to DBZ is the camaraderie among the Z-Fighters, and the sense that no villain can be defeated alone. Your friends must be there to pick you up when you fall, cover your retreat with a Destructo Disc and gather the Dragon Balls to wish you back should you perish in battle. The packaging stresses the game can be played alone, but it’s clearly more fun the closer you get to the max headcount of four players (even if that begets fierce arguments about who gets to play as Goku). Boards for six of the Z-Fighters are available. There’s the stoic Picolo, the tempestuous Vegeta, the ever-promising Gohan, the continually-put-upon Krillin, and that too-cool-for-school punker Trunks. Each starts with a signature ability that relates to dice rolls differently and affects play throughout the entirety of the game.

Knowing I was in a little over my head, I enlisted a comrade of my own. A gamer with shelves well-stocked. One who wouldn’t just make the fight against Cell more fun, but also help sift through the rule book. We picked the father/son duo of Vegeta and Trunks. His initial observation was how this dice game amps up many of the mechanics of Yahtzee. Of course, it encourages teamwork, offers a different style of score-keeping and adds appreciable asymetrical design. But we still couldn’t refrain from referring to it as “Yaht-Z” thereafter. (A geeky social experiment, as I admitted up front). 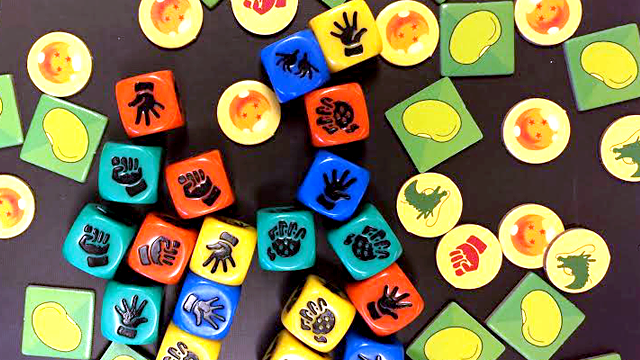 What then stood out to us, and remained evident throughout, was the clarity and quality of Marconi Torres and Samathan Barlin’s art design. Brightly-colored health tokens fittingly bear the image of the series’ panacean Senzu beans and Dragon Ball tokens alter the state-of-play just as their wish-granting likenesses do in the series. Most clever, however, is the implementation of the Saiyans’ super-computing, ocular Scanners as a design theme.

The character mats, and the purchasable Z-shaped Powered Tiles that neatly append to them, are all made to seem like rapidly-processing stats files in those alien eyepieces’ heads-up-displays. The threat tiles drawn up each round, which describe the offensive actions and conditions that the diabolical Cell sets in his counter-attacks, suitably look like the Scanners’ exterior lenses, in turn. A lot of thought has clearly been paid to which pieces correspond to what precise stages of the ebb and flow in a classic DBZ battle.

The colored die that determines the course of battle after Threat Tiles are drawn each round likewise take an extra step for creativity and themeing. Instead of numbers, there are martial arts gestures, like clenched fists, fanned palms and poised hands powering up a Kamehameha (which we couldn’t help but refer to as “spirit fingers”). 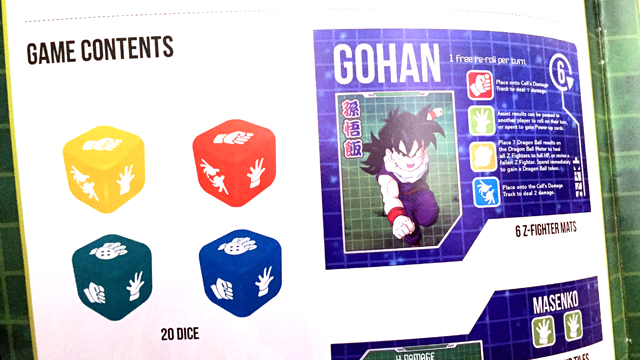 The turn-out of dice rolls can be applied directly against Cell, inhibited by conditions he sets, or swapped among players in shrewd team strategy. Though, their most delightful use is toward the purchase of the aforementioned Powered Tiles. These are all themed after the Z-Fighters’ oft-shouted super moves, like the obliterating Galick Gun and hair-raising Super Saiyan charge up. In turn, they open even more avenues to apply the dice after subsequent rolls. Truthfully, they require more strategy here than they do in the series battles’ themselves, which speaks well to how thoroughly Chris Bryan thought through the license when designing this game.

We got through Perfect Cell in the space of about 40 minutes, though we suspect the game might’ve been more of a saga if we braved the “impossible mode,” or brought in a couple extra players. It seems the more Z-Fighters are at play, the more daunting Cell’s offense become. I can’t speak too deeply about mechanics, beyond parsing my comrade’s observations. I’d say that evidences well-crafted accessibility, though, when a novice like me can move past the learning curve and get to feeling like I’m in a bout of furious, flying fisticuffs fairly fast. Mosaic complexity with DBZ would be a case of missing the point majorly.

Have you played Perfect Cell yet yourself? Which DBZ villain would you want to take down in an epic team-up battle? Let your thoughts fly loose in the comments!