Gloomhaven has become something of a legend in the board game community. From the price tag to the amount of time one can spend playing it, and its (currently) unassailable place at the top of the Board Game Geek’s charts, everything about the game seems larger than life. After a game like that, designer Isaac Childres was left with a question: where to go from here? And due to that game’s success, and the time and freedom it afforded, the answer seems to have been, “wherever I damn well please.” 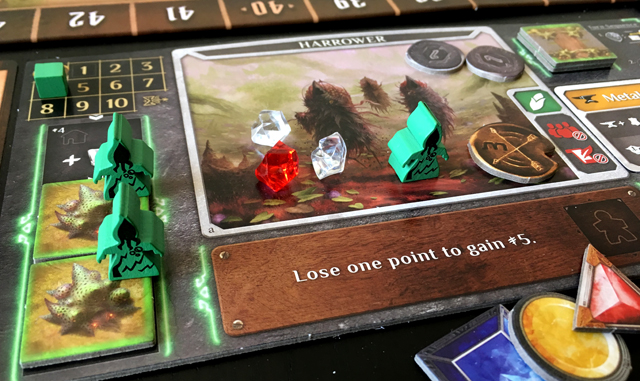 Founders of Gloomhaven is not a sequel or an expansion (those are in the works, but are a little ways off). In fact, in terms of gameplay, Founders doesn’t seem to share a single thing in common. Instead, this game is strictly connected to the lore of Gloomhaven by way of its titular town.

Here you will play as one of the series’ various races, like Inox, Vermlings, or of course, Humans (we do seem to be everywhere, don’t we?) who are working together to build a new town after surviving a great war. Each race brings a different resource with them, such as metal, wood, gems, etc. and you’ll need to share these resources in order to get anything done. 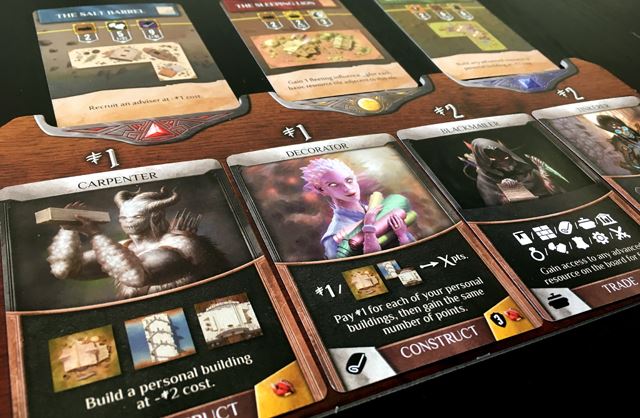 The game plays using cards to fuel specific actions: earning money, hiring workers, and funding construction until six Prestige Buildings have been built, at which point the player with the most points is declared the winner. As it stands, this might not sound particularly different from a lot of Euro-style city building games, but there’s one element that sets it apart. Now, at first it’s going to sound like nothing, but bear with me because this twist is what ties everything together. I mentioned that each race brings a couple resources with them. Throughout the game, that player is the only one who can ever produce that resource. So what, right? Well let me take you through what this means.

Let’s say you’re playing as the Orchids, who bring gems and, in this game, knowledge. Oh yeah, knowledge is a resource in Founders. So you want to use your knowledge to make a more advanced resource: books. But you need more than just knowledge, yes you need crops to make the paper that you’ll print your precious words onto. The Harrowers have the crops, so in order to build your printing press, you first need to buy the crops by connecting to the building that produces them and paying for the privilege of access. Then you slide a claim token under the original owners’ and boom, you have access to his food.

So now you connect a few more roads and build an advanced building to make books. You get two points for that. Huzzah! However, because the Green player provided you with the crops that you needed, you have to give them one of those points.

This is the crux of the game. Almost everything you make is at least partially reliant on what other people have. And when you build even more complex and valuable resources like weapons or government the cogs of this intricate point machine start to fully reveal themselves. You connect a resource you technically own to a Prestige Building, bringing in eight points (!) only to realize that everything you used to make that resource belonged to other players, meaning that you get to keep a few of those points and the rest gets distributed to everyone else. But it was still worth it because if you hadn’t done it, another player would’ve reaped even greater rewards. The mental gymnastics you have to do to keep each supply line in your head is at the same time one of the hardest things I’ve had to grasp in a game, and the reason I want to keep coming back to it.

Founders of Gloomhaven looks cooperative at first. And it seems friendly enough, sure. Several different races coming together in peace to build a new city. But once you get a few rounds in, the mercenary nature of the game starts to reveal itself. You might put a resource that another player can use next to one of their buildings, that sounds nice. Of course, they’ll have to pay you to use it but hey come on, we’re all just working together here. What’s that? This resource building I placed blocks you from ever reaching the higher value building behind it? Oh no! Well, at least now you can borrow my machinery and it’ll earn me points every time you do. It’s passive aggressive in the best way possible. Everything in this game is done with a smile on your face and greed in your heart. 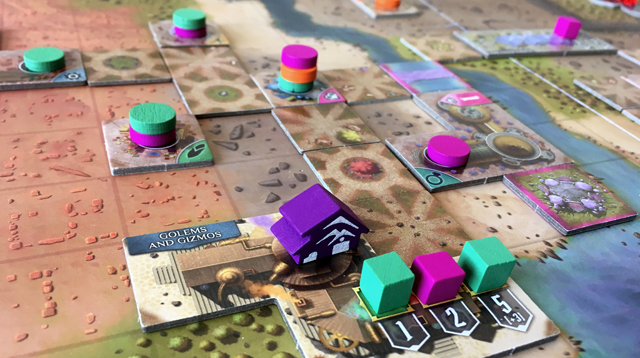 Founders may only be thematically tied to Gloomhaven, but fans of the original will still find a lot to love here. The aesthetic is perfectly captured, with several design choices mirroring the look of Gloomhaven, but with a refreshing splash of color mixed in with the muted earth tones. And the representation of the different races is more than just window dressing. Owners of both games can play a single game to decide which race contributed the most to Gloomhaven’s founding. Adding one of nine unique event cards to your City event deck. It’s a small touch, but a welcome one.

As for the complexity of Founders, fans of heavy euro games will feel right at home. The strategy is deep and rewards careful thought and canny planning. And considering how complex Gloomhaven can be, veterans of that game shouldn’t have too hard of a time jumping into Founders either. It’s an immensely satisfying experience that might not be for everyone, but those who put the time in will find it well worth the investment.

What’s your favorite heavy-weight game? Tell us in the comments!

Sparkle*Kitty Nights Brings A Touch Of Naughty To This Nice ...