There are so many games out there where you change goods from one thing to another. Or where you need just one more wood plank or gold piece to build your farm or add another building. But there are so few games out there where you attempt to create a successful hotel and café. In Grand Austria Hotel, you do just that as you attract the right guests, stock your café, employ staff, and ultimately try to get your rooms filled.

Each round, players have the chance to attract individual guests to their café. Those guests not only provide a particular one-time ability, but also request combinations of wine, coffee, cake, and strudel from your kitchen. It’s your job to get those whipped up and out to the customers. 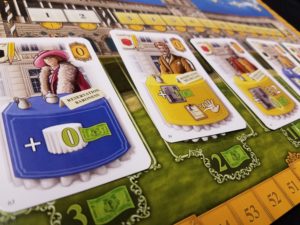 Once their appetites are satisfied, however, you want them to stay in one of your hotel rooms. You’ll first need to prepare the room for an occupant, then close it up once they decide to stay the night. Over the course of the game, you’ll see your hotel fill with guests.

But the most interesting aspect of Grand Austria Hotel is how actions are handled. There are six different actions to choose from that can get you money, food, or help you prepare rooms. But they might not always be available. Instead, it all comes down to a pile of dice.

This mechanism has a profound impact on the game. You’ll often have to choose between taking an action that you want right now, which maybe has few dice and will be underpowered, or an action that has a lot of dice on it now, but which may not be useful at that particular moment. Facing difficult choices from round to round always brings enjoyable tension to a game, and Grand Austria Hotel certainly provides.

And so that the last person doesn’t get totally hosed on actions, the game uses a snaking pattern for turns. So each person gets to go twice, but instead of going 1, 2, 3, then 1, 2, 3 again, it goes 1, 2, 3, then 3, 2, 1. So the person who goes first gets the best action, but also the worst. It’s a great way to even out the randomness of the die roll while also ensuring that players have to pay careful attention to their opponents. 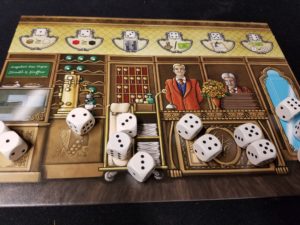 It may be that I want to take my two actions in a particular order. But will those dice still be there when it comes back around to me for the second one? It means paying careful attention to what your everyone else is doing. Are they likely to snag the same action as you, or are you working toward separate things this round? Although the competition is mostly indirect, you’ll see a lot of interaction in this title with players having numerous ways to stymie opponents or snatch away coveted guests.

But the game is more than just an interesting action/dice selection mechanism.  As you pick up guests, you’ll have to manage their desires along with your finances. But perhaps most important, you need to keep an eye on the emperor’s rewards. The goal, after all, is to become the most prestigious hotelier in the city.

To do so, you get special points on the emperor’s track. And, after every odd numbered round (after the first), there is an emperor scoring.  If you have a high enough value, you will get a special bonus. But if you bottom out and have no emperor value, you will get an even more special penalty. This carrot and stick approach encourages you to deviate from your primary point-generating plans into other endeavors.  It’s a great way to add more choice and more consequence into an already packed game.

Like a good guest, Grand Austria Hotel doesn’t outstay its welcome. Rounds tend to move briskly and the game lasts for only seven. The result is a fantastic, enjoyable, decision-filled game that doesn’t involve an inordinate time commitment. If you haven’t yet spent time there, you should absolutely check out the Grand Austria Hotel.

Have you played this game?  Tell us what you think about it in the comments.