Suppress or Stoke Revolution As the Bad Guys in 'Mistborn: House War' - Nerdist

Suppress or Stoke Revolution As the Bad Guys in ‘Mistborn: House War’

If you’re familiar with Brandon Sanderson’s best-selling Mistborn series, you’ll know that it’s a dystopian fantasy setting where the heroes are basically superpowered protagonists. Think Les Miserables meets the X-Men. It’s a grimdark setting that takes horrors like slavery and offers magic as a means of revolution. It’s delightful and satisfying, but capturing what makes the universe special and translating it to tabletop games is no small task. Thankfully, Crafty Games has proven they’re up to the task.

Crafty has already released an RPG set in the Mistborn universe, where players essentially imagine themselves similarly to the heroes of the novels – as rebels, spies, thieves, and outsiders. That particular treatment made a lot of sense for an adventure RPG: you’d explore, command and liberate the oppressed of Scadrial not unlike the protagonists of the novel series.

Last year, Crafty created a board game set in the world, and with this game they took a different tack. As lead developer Alex Flagg explains, “The concept of Mistborn: House War is simple: rather than the players simply reliving the first Mistborn novel as the heroes, they instead become the leaders of Scadrial’s greatest noble Houses during the events of the first novel.” 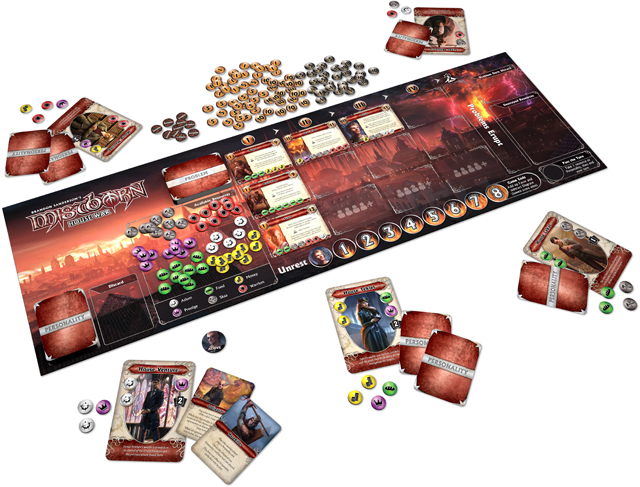 Playing as a Great House noble lets you explore Scadrial from a new perspective and in a new way. The discoveries to be had offer fans a special, surprising, and delightful experience. As Alex describes, “I worked directly with Brandon Sanderson’s team at Dragonsteel Entertainment to flesh out the 10 Great Houses of the Mistborn world – how they make their fortunes, their particular strengths and weaknesses, and a raft of new characters – to expand [Brandon Sanderson’s] world as we’ve never seen before.”

Mistborn: House War doesn’t just offer a beautiful and immersive setting. This isn’t just another shallow licensed game. Whether you’re a fan of the universe or new to Mistborn, the game offers some really compelling mechanics. At its heart, this is a resource management game with a strong narrative that drives the game ever forward. Players enjoy unique choices thanks to a semi-cooperative, asymmetrical design.

In Mistborn: House War, each player controls a unique Noble House, with its own strengths and weaknesses. Designer Kevin Wilson gave the game a “frenemies” structure, where players must both compete to be the winner and cooperate to resolve problems bigger than any one House – mainly by sharing resources and assets in exchange for the Lord Ruler’s Favor (victory points). As Alex describes, “Mistborn: House War requires negotiation, strategy, deception, and betrayal to win. The outcome is never certain. It’s a perfect encapsulation of the savage and ever-changing political landscape of the novels.” 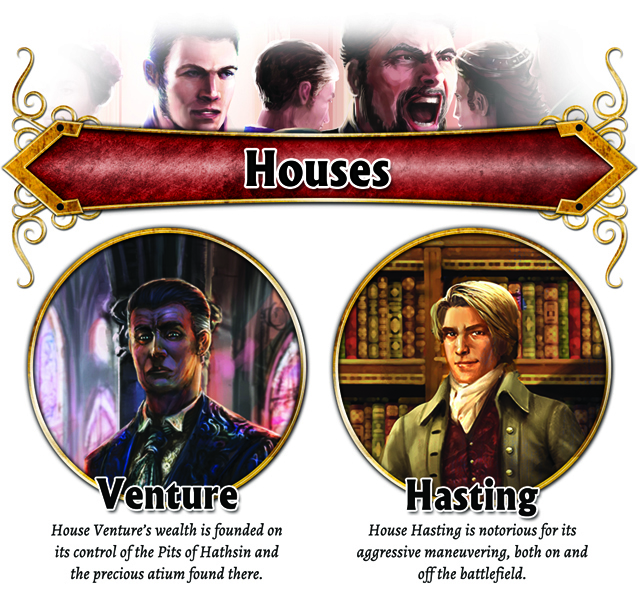 You don’t need to be a fan of the universe to appreciate a well-designed game; in fact, this game is intentionally designed to help introduce you to a world you, too, can fall in love with. “We make all our Mistborn games as ‘on-ramps’ to the novels; about half our audience are gamers who have never read the novels prior to playing the game, so we work really hard to avoid spoilers for those who are inspired to read the books after playing.”

Much like the “frenemies” nature of the gameplay, the victory mechanics are also unique to the universe in which the game is set. The narrative is simple: the Houses are competing with each other for resources and influence while ensuring the stability of the Final Empire. Discontent in the Empire is articulated in the game through Unrest, and like any situation involving cutthroat political intrigue and the ruling classes, working in your own best interests might mean managing Unrest one turn, and stoking the fires of rebellion the next.

Victory is earned one of two (remarkably divergent) ways, which adds a unique twist to the game. The House that garners the most Favor from the Lord Ruler (through canny resource management and cooperation with the other houses) wins if the Unrest is managed and any attempts at rebellion are quashed. However, if Unrest reaches a threshold and the popular revolution is successful, the Noble House with the least Favor wins instead. This House is closest to the people and so its nobles avoid a grisly meeting with the rebels’ guillotines.

This victory mechanic really ups the ante for resource-management games and creates tension for players as they walk a precarious tightrope. Alex describes the ultimate underlying strategy: “Smart players are careful. If you build a huge lead early on, the other players will turn on you and let the Final Empire burn as they race to the bottom. Cagey cooperation and earning Favor from the Problems your opponents solve are key to executing a flawless betrayal. Snatching victory like this is really satisfying and great fun.”

Mistborn: House War is full of take-that mechanics that reward shrewd, strategic gameplay. Novel readers will be happy to see Allomancers (magic users) as cards that can steal resources, meddle with Problems, or assassinate opposing henchmen. These characters can quickly undercut strategies or forge alliances between Houses… if only for a little while. You’re also allowed (and even encouraged) to cash in social currency – calling on out-of-game favors to better your position. Long-term promises add a whole other level to the gameplay, especially since they’re only binding if an Obligator card is played. All in all, Mistborn: House War is an experience well beyond trading sheep for wood.

Alex describes a great experience demoing the game: “During playtesting we had a pair of brothers from New York playing House War for the first time. At one point, they start to bring up stuff from their childhood. ‘I’m not gonna help you with that! You ratted me out when I broke Mom’s vase and you can’t be trusted!’ – The rest of the table was just cracking up. Both brothers came away all smiles and told us it was the best demo they’d played at the show. Seeing the game encourage that level of enthusiasm and creativity is what makes it really special.”

If you’re interested in learning more, check out Becca’s How To Play Mistborn: House War video!

Want to get your hands on the game? Pick it up at mistbornhousewar.com and at reputable game retailers near you. You can also stay up-to-date with what Crafty Games is up to by signing up for their email newsletter or following them on Facebook and Twitter.

Image credits: Crafty Games
This is a sponsored post.