When it comes to planning the perfect party game, sometimes going simple is the key. Trivia, strategy, and roleplaying are definitely at the top of our list, but they’re not everybody’s cup of tea. By now, we’re probably all familiar with fun group card games like Apples to Apples and Cards Against Humanity. They’re simple, hilarious, and most importantly: a hit at parties. But it just might be time to add another game to your party arsenal. Let your nerd flag fly with Superfight, a game that we were fortunately able to get our hands on at Comic-Con.

With a tag like, “This game will cost you your friendships”, prepare for battle.  While it might not be new if you’re familiar with the Con scene, Superfight is still gaining popularity among the masses. And while it hits on the same notes as Cards Against Humanity, Apples to Apples, and the like, Superfight stands strong on its own as a must-have for every geek’s party game pile. 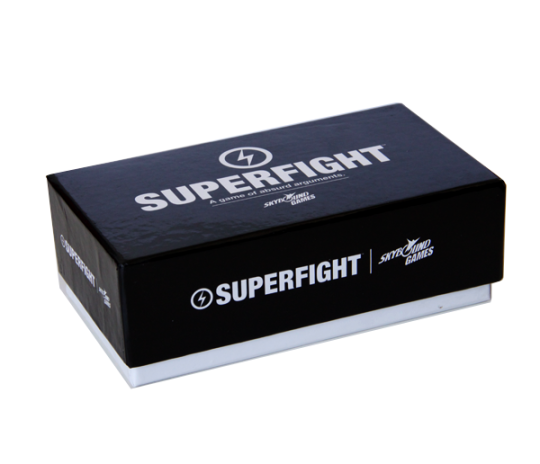 Superfight is an interactive game where you draw cards: white cards are characters and black cards are attributes. Similar to other card-based party games, you draw 3 of each, and then “create” your fighter to fight against another player by choosing a character and attributes to apply to them. These characters and attributes can range from ultra-geeky to hilariously absurd. To give you a small taste of what we’re talking about; I had a fight between Sasquatch, armed with a crowbar, and with acid blood, against Nickelback, armed with a rotating machine gun turret, and with skin covered in spikes. Once the battlefield is set, the winner is determined by the other players in the group. It becomes a hilarious argument of wits and questions about strength and durability that gets everyone involved. The winner of each match gets to face off with the next contestant, and the matches continue.

The other plus side to Superfight is the availability of expansion packs to help evolve the game into a more exciting and enjoyable experience for everyone. There’s character expansions, scenarios, locations, and so much more you can add to the mix. We picked up the blue locations pack, which places the individual fights in various difficult settings, each with unique pros and cons. We also grabbed the orange pack, which brings in even more new sci-fi, literature, and fantasy nerd references to the equation. These expansions are just one way to bring new and interesting situations to the game, but it stands strong without them as well. 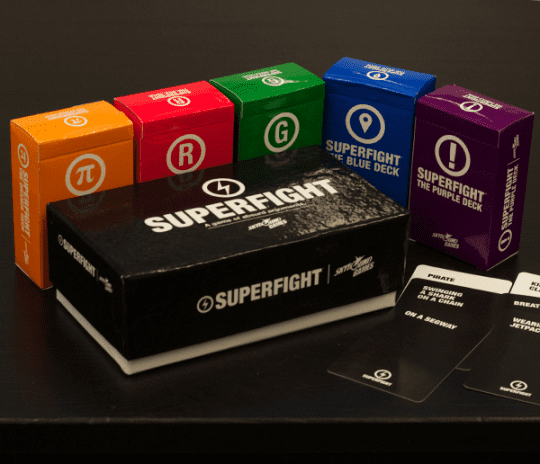 We know that it’s tough to get an entire party interested in one game, but we think we’ve found a great option for you all. Not only is Superfight a game that will utilize your nerd knowledge, but it’s a game that people of all ages, genders, and interests will enjoy playing and debating over for hours. If you want to purchase the game yourself, head on over to their site, Superfightgame.com, or keep an eye out for them at your next convention.