OVERVIEW: Stuffed Fables is A Fantastic Adventure Game for Families

Growing up is tough. Life moves fast when you’re a little kid and there are all sorts things to deal with. Big kid beds, potty training, the first day of school…and monsters under the bed. Stuffed Fables, by Plaid Hat Games,  is the story of a little girl and her stuffed animals – the real heroes of childhood. These plushies don’t just provide comfort, the stand watch over little kids at night and even descend into the darkness under the bed if necessary.

Stuffed Fables is a new title from Jerry Hawthorne, best known for  Mice & Mystics. Mice & Mystics has always been recommended as a great game for parents to play with kids and this followup may be even better. Like Mice & Mystics, it’s a tale of friendship, adventure, and overcoming seemingly insurmountable odds. Stuffed Fables takes this one step further. Chapter by chapter you’ll take on the role of Theodora the stuffed bear, Lionel the lion, or a hand-me-down something or other named Stitch. 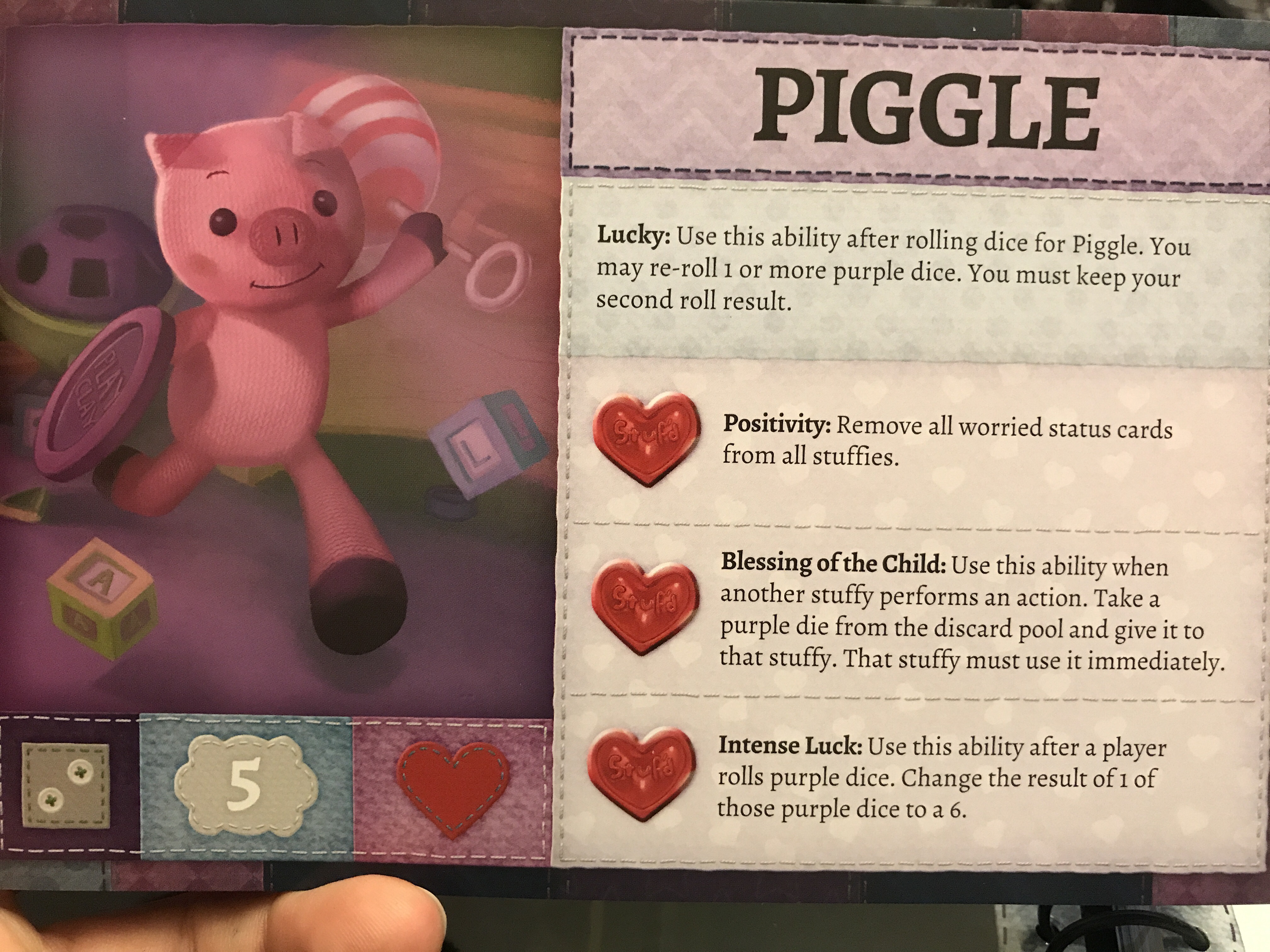 Each adventure is a new chapter in a little girl’s life. We never find out her name, or really all too much about her. The story is not really about her, though the challenges she faces growing up provide the background for the adventure. The first adventure – which serves as a system tutorial – takes place on the little girl’s first night in her big girl bed. The plushie adventurers quickly notice that something seems wrong and a creature scuttles onto the bed to steal her blankie. By pure chance, I played it the weekend we moved my son into his big boy bed for the first time and thus appreciate the importance of a little kid’s blankie in helping them sleep at night. 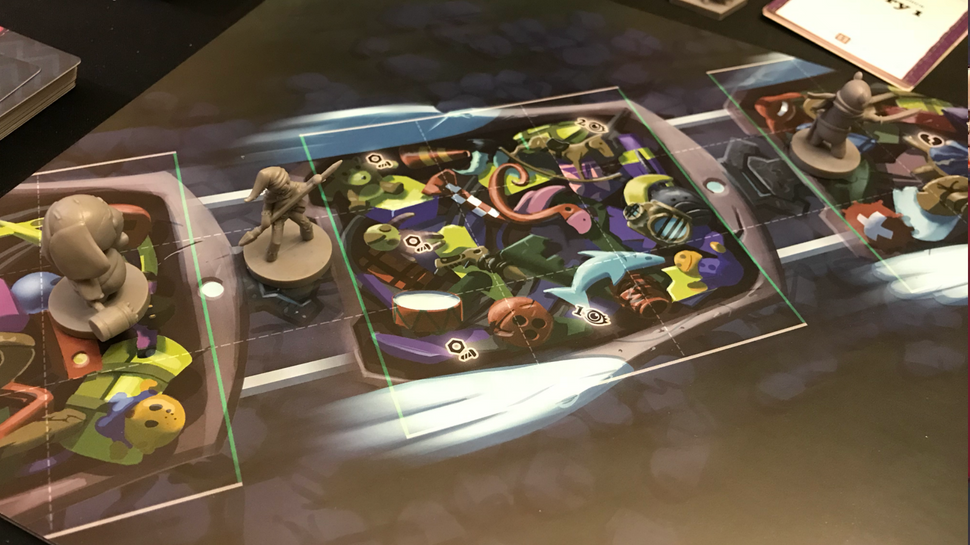 Stitch tells the rest of the toys about his time guarding the little girl’s mom, and his insight provides valuable throughout each adventure. Potty training, the first day of school…each of these milestones and more are portrayed as adventures for players to go through. On potty training night, the evil creatures under the bed start the evening by running the water in the bathroom hoping to make the little girl cry. These mundane beginnings quickly give way to fantastical adventures in the realm under the bed.

These play out on the beautifully colored pages of an adventure book. Setting up the game is as simple as shuffling a few decks of cards and opening the book. As you advance from area to area in an adventure you’ll simply turn the page and put a few tokens out. The entire playing surface is one page of this book, with story paragraphs and instructions on the opposite page. There’s little rulebook referencing required, letting you and your kids get straight into the story. 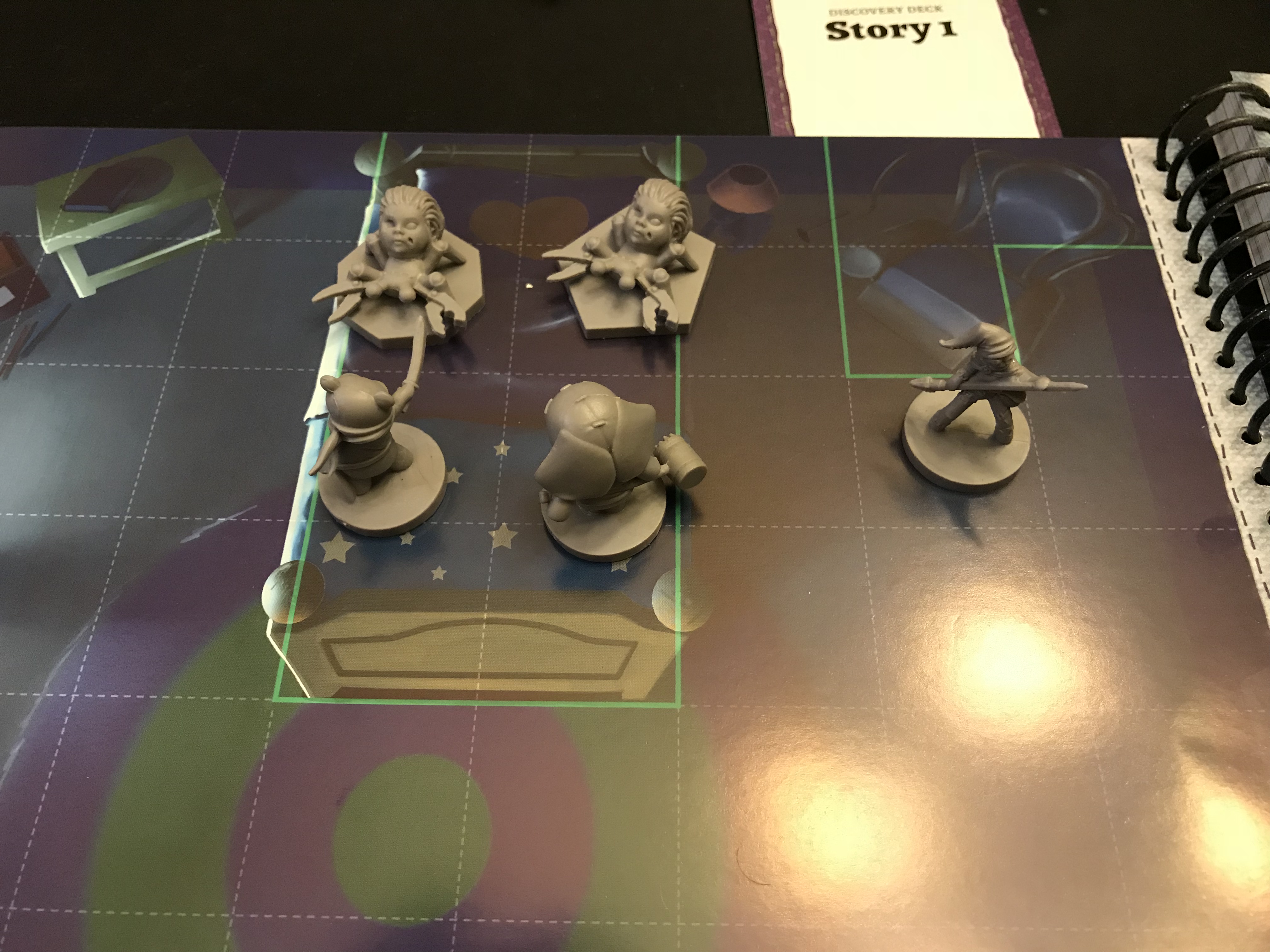 Unfortunately, this does constrain each area to a large square. While there are barriers and stage effects to add complexity, for the most part there is only so much you can do. Younger gamers may not feel the constraint but it’s something I noticed. Where young gamers may get frustrated is in the dice action system. On your turn, you’ll reach into a bag of colored dice and draw a handful. Each color corresponds to a different action, but there isn’t much you can do to mitigate a bad grab. If your plushie is wielding a sharpened pencil in melee combat, green dice aren’t going to do much for you. It adds an element of uncertainty but also potential frustration for kids (and adults!) who go don’t get the dice that lets them shine a few rounds in a row.

These issues are relatively minor, however. The adventures are rollicking and each plushie gets the chance to use their special abilities in each adventure. It’s also extremely difficult to lose a game, as it requires all plushies being knocked out. What’s more likely is that the adventure ends after the little girl has woken up early and not had restful sleep. When this happens, players still accomplish their goals but the final story is a little different. 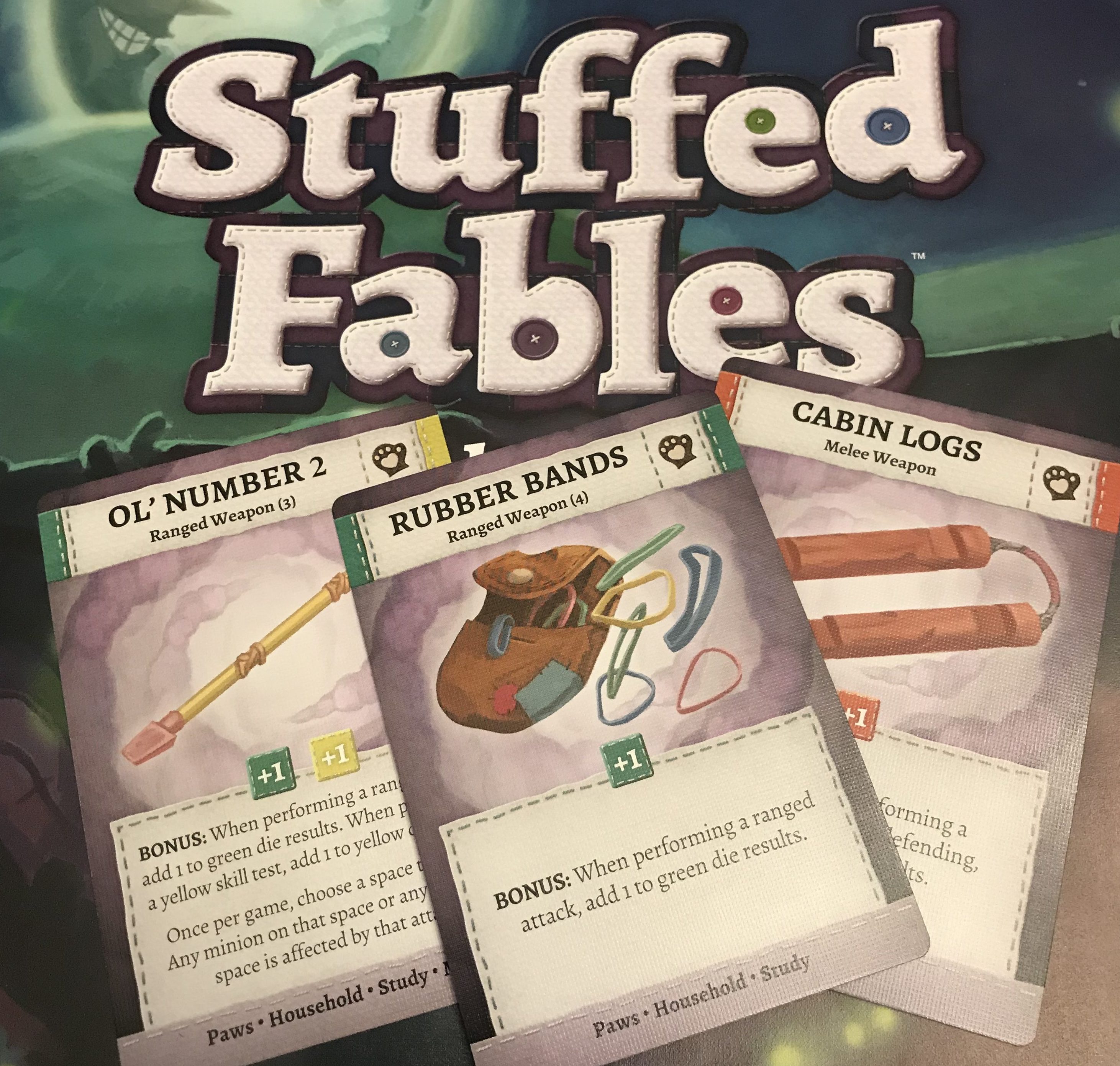 The end of an adventure is one of the greatest things about this story game. It ends with the little girl reflecting on what she’s going through, and the book provides discussion topics for families. At the end of the first night in the little girl’s Big Girl Bed, your family is prompted to share how you felt when going through major changes in your life. It’s a sweet way to end family game night, and is something I’m looking forward to doing with my son when he gets a little older. As much as he loves playing with dice, he’s a little young for some of the scarier enemies. I’m in no hurry to have him grow up, but Stuffed Fables will be on the shelf when he does right next to my copy of Mice & Mystics.

Have you played Stuffed Fables? Tell us about what you think in the comments below!

In addition to Geek & Sundry, Raf Cordero  co-hosts the gaming podcast  Ding & Dent. Chat with him on Twitter  @captainraffi.