Everything We Know About STRANGER THINGS 4

Stranger Things has a lot of mysteries left to unravel. Like how exactly Chief Hopper is still alive and in a Soviet prison. But Russia isn’t the only other locale—or world—the show will visit in the future. The series is moving beyond Hawkins to California. And it will feature a lot of new characters when it does. Here’s everything we know about Stranger Things 4 so far. 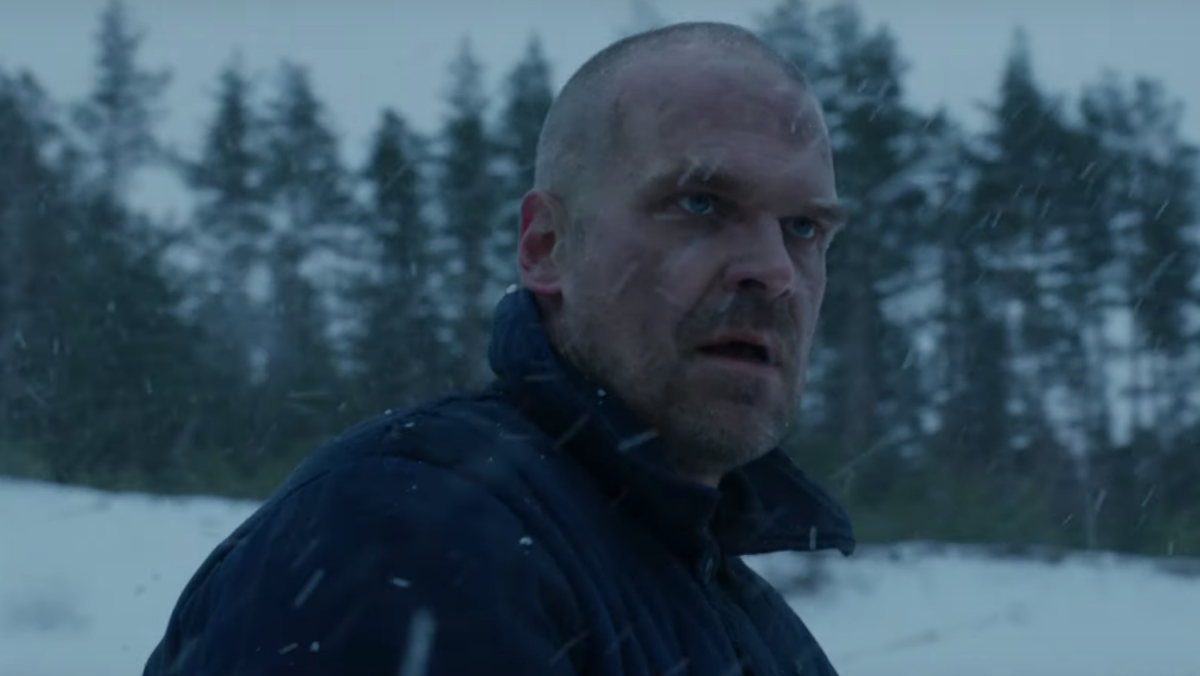 In true Stranger Things fashion, we’re learning crumb-sized bits and pieces about the fourth season of the Netflix mega-hit. An episode title reveal shows there are nine episodes in Stranger Things 4. Based on those titles, we will go back to some familiar faces and places, including Hawkins Lab, Dr. Brenner, and Billy. So far, we know that after seemingly dying in season three, Chief Hopper is alive… and sitting in a Russian prison. The series has also teased a spooky new element to season four, a sinister house that gives us major Poltergeist—or even Amityville Horror—vibes.

In the clip, we see the Creels, a seemingly perfect nuclear family, move into a home. But something sinister is on the horizon. (Robert Englund plays an older Mr. Creel, locked up in a psychiatric hospital due to the events that transpire in this house.)

Thirty years later, our favorite group of teenage monster hunters—sans the Byers kids and Eleven—are creeping around the house looking for clues. What are they looking for? We’re not sure yet but the ticking clock is really unsettling.

The first overview of the season, released in August, doesn’t give too much away at all. There’s a brief summary of how we got to this point, and an adorable trip down seasons one and two memory lane. But then… the flashes of new footage. The group in the haunted house, presumably finding the clock. Hopper seemingly sprung from prison. Eleven, once again, screaming while being restrained by men in suits.

The more things change, the more they stay the same. Stranger Things Day a.k.a. November 6 gave us a more splashy (and somewhat ominous) teaser showing Eleven’s life in Cali with the Byers. She’s faking like it’s all good in a letter to Mike but she’s still quite the outcast. It sets up a Spring Break that will certainly change their lives again.

Additionally, now we know that Stranger Things season four will have a two-part premiere. Volume 1 will premiere on May 27.  And Volume 2 will premiere on July 1. The Duffer brothers also shared that season four will be one of the longest seasons yet, at least in terms of runtime. Netflix also shared five new posters teasing what’s to come. In them, we see all our favorite characters scattered through different locales, which include Siberia, Hawkins Laboratory, the aforementioned sinister house, and California. You can read our deeper dive into these Stranger Things 4 posters here.

001. Russia. Getting the band back together. Bring a jacket. pic.twitter.com/NO4NHRLVDs

Every ending has a beginning. Vol. 1 is coming May 27. Vol. 2 is coming July 1. pic.twitter.com/nw8IYqQzil

The most important thing to take away from these posters is that no matter where the characters are, they are heading toward one another. It feels like these posters are teasing a truly large-scale reunion for season four.

And finally, we have our full Stranger Things 4 trailer. This chilling new trailer reveals the huge, upcoming war that awaits our favorite gang. No one is safe. Especially not with a terrifying new monster lurking in the shadows. The stakes seem like they are higher than ever. And that only makes sense for the last season of this beloved show.

The logline for the show shares even more, offering:

It’s been six months since the Battle of Starcourt, which brought terror and destruction to Hawkins. Struggling with the aftermath, our group of friends are separated for the first time – and navigating the complexities of high school hasn’t made things any easier. In this most vulnerable time, a new and horrifying supernatural threat surfaces, presenting a gruesome mystery that, if solved, might finally put an end to the horrors of the Upside Down.

One mystery we don’t have to worry about going into season four is whether Chief Hopper is still alive. The Duffer Brothers got that out of the way very quickly, revealing David Harbour is returning to the series. As are the rest of the sprawling ensemble cast who’ve somehow survived three seasons venturing into the Upside Down. But as always, a host of new faces are joining the series. And among them are a Game of Thrones alum and an iconic horror villain. 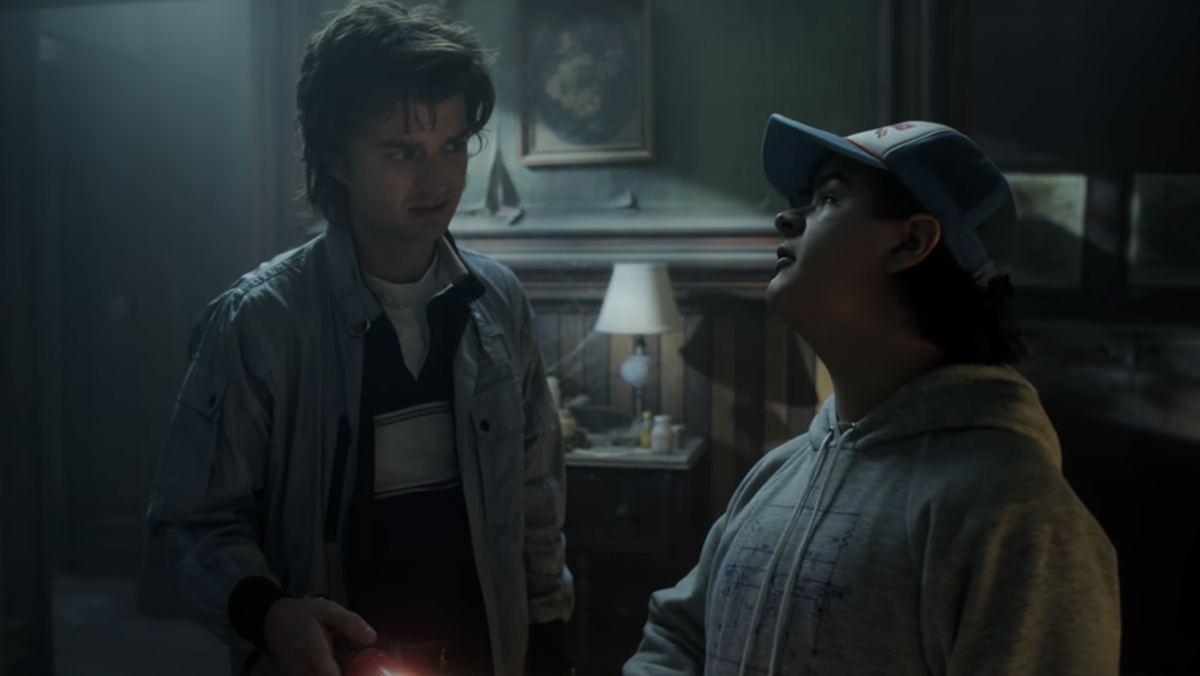 Things are always scary in Hawkins. But in season four they’re going to be a real nightmare. Freddy Krueger himself, Robert Englund, is joining the show. The Nightmare on Elm Street star will be bringing even more terror to the horror series. He’ll play Victor Creel, “a disturbed and intimidating man who is imprisoned in a psychiatric hospital for a gruesome murder in the 1950s.” Which sounds perfect for Englund. But he’s just one of many newcomers to the show Netflix has announced. It’s a group that also includes a Game of Throne alum. We get to see a bit of the OG cast along with some newcomers in these images.

come and get it. pic.twitter.com/hOeJSmeAth

Eduardo Franco (Booksmart), Jamie Campbell Bower (Sweeney Todd), and Joseph Quinn (Catherine the Great) will be joining as series regulars. Franco will star as Argyle, “Jonathan’s new BFF” and “a fun-loving stoner who proudly delivers delicious pizza pies for Surfer Boy Pizza.” Bower is playing Peter Ballard, an orderly at the psychiatric hospital, presumably the one housing Creel. And Quinn will join them as Eddie Munson, “head of the Hawkins High official D&D Club, The Hellfire Club,” which promises to be a big part of the season.

Jamie Campbell Bower aka Peter Ballard is a caring man who works as an orderly at a psychiatric hospital. Tired of the brutality he witnesses day after day, will Peter finally take a stand? pic.twitter.com/hUlhKV9pwc

Other new cast members include Sherman Augustus as Lt. Colonel Sullivan, Mason Dye as Hawkins jock Jason Carver, and Nikola Djuricko will star as a Russian smuggler called Yuri. The former Jaqen H’ghar, Game of Thrones‘ Tom Wlaschiha, will play Dmitri, “a smart and charming Russian prison guard” who befriends Hopper. But just how trustworthy is he?

The Duffer Brothers also introduced new cast members as part of Netflix’s first ever “Geeked Week” virtual event. The latest performers includes Amybeth McNulty. She’ll play Vickie, “a cool, fast-talking band nerd who catches the eye of one of our beloved heroes.” The Duffers also say she’ll play a “big role in events to come.” The pair also said they have wanted to work with McNulty for a long time, since they’re both huge fans of Anne of Green Gables. An appreciation that has popped up on the show previously.

all aboard! the Duffer Brothers are here with special news that they want to personally share with you. @stranger_things #GeekedWeek pic.twitter.com/TVheNMqgUl

Also heading to Hawkins is Myles Truitt as basketball star Patrick.  Regina Ting Chen will star as guidance counselor Ms. Kelly.  And finally Grace Van Dien will play Chrissy, a head cheerleader with a secret. In a town like Hawkins, that could be one very dark secret.