Stop Writing Adventures and Use These - Nerdist

Stop Writing Adventures and Use These

Artist and adventure designer Michael Prescott is creating beautiful, detailed, system-neutral adventures that fit on a single sheet of paper. Funded via his Patreon, he’s crafting one or more a month, each a one or two-sided masterpiece, usually featuring an isometric map and lovingly piled with interesting creatures and loot.

Useful for nearly any fantasy RPG system, they’re perfect for when you’re just not sure what the next dungeon crawl or interesting area to explore might turn up. You might need to provide your own stats for the monsters and traps, but with creative work like this as a starting place that’s an easy task.

What’s great about them are the little details you sometimes overlook when writing up an adventure or coming up with something on the fly. Nuances that tie a location together and give it a sense of reality are present everywhere. Let’s go over a few choice selections from what he’s made.

The Skyblind Spire. The tower is interesting in itself; a physical spell that’s the final work of now dead wizard. The twist is that a group of goblin thieves have curse the spire, so that any who enter become blind to the color blue.  Under cover of tarps and cloaks, they use their curse to aid in pilfering silver from the old ruin, but their ploy will obviously cause some problems for any other adventurers heading into the tower. 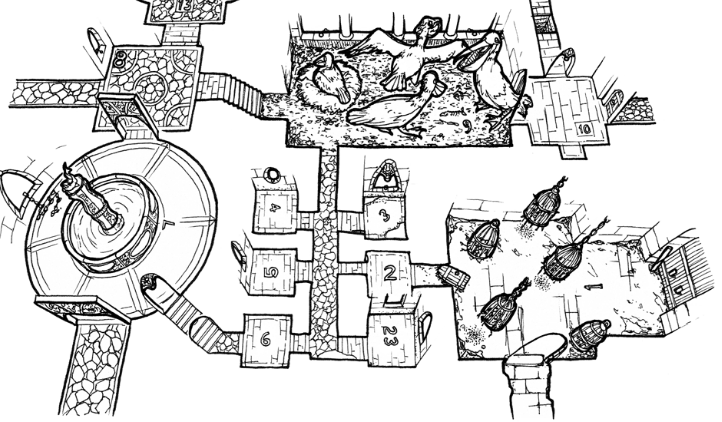 The Full-Dark Stone. A leaking vault storing an engine of dark magical power designed to send useful spell energies to wizards far away. The situation is complicated by an apprentice to a fallen wizard toiling in the darkness, undead at his command, and random spell effects created by the Full-Dark Stone itself. 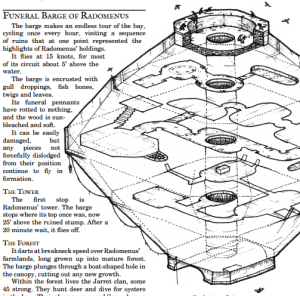 The Lantern of Wyv. Like a great pyramid in the sky, the lantern is a floating crypt for a powerful wizard with great taste in architecture. Strange secrets can be found inside, including items of teleportation, healing, and resurrection. Who thinks an undead version of the wizard is still up and about in there? I sure do.

The Unmended Way. A mountain pass occupied by a group of giants and their allies and, well, here’s a quote from the synopsis:

“Inside, the giants work to perfect the ritual of tea making, a task they see as essential to the well-being of the lowlanders.

Ultimately the giants guard a garden containing an ancient ghostly sorceress of immense power, though their admonitions about brewing tea properly probably makes them seem a bit more mundane. Well, as mundane as giants can be at least.

A Litany in Scratches. An abandoned monastery, now home to all manner of undead and monstrous creatures, this is a horror story in the form of a well-detailed locale. Vampiric plant life are just the beginning, with the structure giving way to dangerous crypts and a book full of promises of immortality in exchange for terrible deeds.

So check out the adventures and if you use them be sure to sign up for Michael Prescott’s Patreon. Let us know how they work for you in the comments.