Stop the Evil Wizard (Or Fend Off the Pesky Heroes) in VALOR & VILLAINY: MINIONS OF MORDAK - Nerdist

Stop the Evil Wizard (Or Fend Off the Pesky Heroes) in VALOR & VILLAINY: MINIONS OF MORDAK

The evil wizard Mordak has vanished after the good King Shapiro died in a freak catapult accident. Before disappearing, he warned, “Foolish mortals! I shall inflict inter-dimensional terror upon the kingdom for six days, and on the seventh day, I shall return with the powers of the cosmos, to claim my rightful seat at the throne!”

From Skybound Games comes Valor & Villainy: Minions of Mordak, a one-versus-all game of might, magic, and mayhem. One player controls Mordak while up to five other players form The Order Without Borders, a band of heroes who set forth to stop the wily Mordak. Can the heroes find the three ancient shrines that can weaken the wizard before he returns for the final battle? Or will Mordak defeat the heroes and force the kingdom to cower before its new evil master?

In Valor & Villainy, the heroes work together to find three shrines that will weaken Mordark before the final battle. Whoever is left standing is the winner!

Each player’s character has a unique board that details the strengths and weaknesses of that character: the barbarian is stronger in melee attacks, the cleric’s magic skills are better than other heroes, and so forth. Player characters have different amounts of health points, special abilities, and can gain extra dice for melee, ranged, or mana attacks. 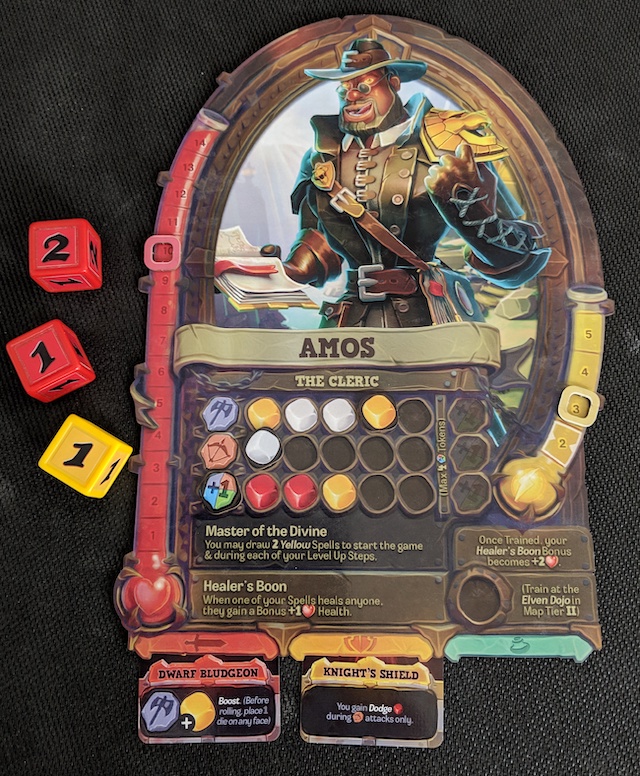 During each round, heroes will explore the map tiles, hoping to uncover the ancient shrines that weaken Mordak. You’ll spend action points to move and learn new spells, and you may also scout new locations and loot any treasures. Uncover minions and you’ll use your dice in combat. Find one of the ancient shrines and Mordak will immediately lose health points. Do you stay together, enjoying the safety in numbers against all of Mordak’s minions? Or do you spread out, hoping to quickly find the shrines before the wizard gets too powerful?

After you’re done adventuring for the round, everyone in your group levels up by drawing new spells and equipping themselves from the group’s loot stash. You’ll gain and spend experience points that unlock special abilities and earn extra dice for your characters, making them stronger for future combat. 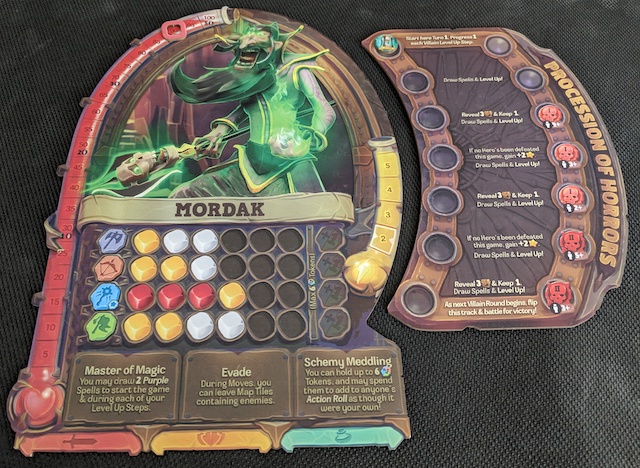 Your band of heroes can’t get too comfortable, though, exploring and looting away. Mordak also gets their turn, basically taking similar actions as the heroes, but also unleashing more minions to fight them. And that’s not all: Mordak can also level up! Mordak’s personal loot stash can help him become more powerful and if the Procession of Horrors track reaches the end, the final battle begins immediately. You can see how the game is set up and played in Ivan’s How to Play video:

Like a role-playing game in a box, Valor & Villainy: Minions of Mordak features a multitude of monsters to battle, tons of treasure to loot, and lots of cool bonuses to collect when leveling up. While the heroes work together to gain strength and items for the epic final battle, Mordak also attempts to level up, hoping to become too powerful for the heroes to overcome.

Players who love fantasy adventures on the tabletop will find lots to love in Valor & Villainy. The game’s clever level-up system for all characters is a terrific way to add variability to each session. Will your barbarian Scrutt improve its ranged attacks with extra dice or will your Battle Rage ability be unlocked for increased healing power? Will your mage Alyndra learn more powerful spells at the Elven Dojo? 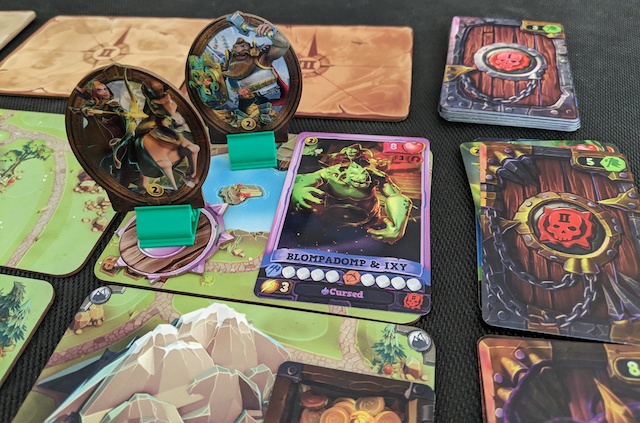 With several heroes to choose from and over 100 spells and treasures to earn, along with dozens of minions to fight, no game is ever the same. Whether you choose to play as the heroes or Mordak, Valor & Villainy: Minions of Mordak will immerse you in its world of fantasy and high adventure. Check out the game in action in our episode of Game the Game:

Thanks to Skybound for sponsoring this article. Learn more about Valor & Villainy: Minions of Mordak at minionsofmordak.com  and secure your copy by backing it on Kickstarter.