Step into the Darkness with The Shadow of the Demon Lord

Fantasy, like a tasty beverage, comes in a variety of flavors. Role-playing games aren’t much different. For fans of fantasy media who like a darker start for their heroes like Dark Souls, Lords of the Fallen, or The Dark Crystal, designer Robert Schwalb offers a grim world in search of heroes called Shadow of the Demon Lord. What makes this game worth exploring? We reveal some of the Demon Lord’s secrets below. 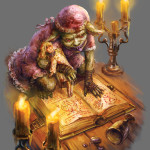 The game offers a variety of races, called ancestries, for players to choose from. Many of them are variants on the classics like humans and dwarves and the flavor of Shadow of the Demon Lord starts to seep in here by offering a few other unusual choices. Changelings are shapeshifters that can look like anyone they touch, clockworks are artificial magical beings that need to be rewound after combats instead of healed, and goblins have strange mutations like a sixth finger and take names that double as curse words in other languages. Characters also roll to begin play with items ranging from medals of valor to mummified halflings that may factor into the story.

Even before the arrival of the Demon Lord, Urth isn’t exactly a great place to raise a family. A long-standing war has turned a huge chunk of land into an undead spawning desert known as the Desolation. The Emperor is rumored to have been killed in an orc slave uprising, leaving his armies in disarray. The arrival of the Demon Lord changes the fundamental nature of reality. The game suggests a few rules for the GM to choose from at the start of play to make it imperative for the players to stop his complete arrival. 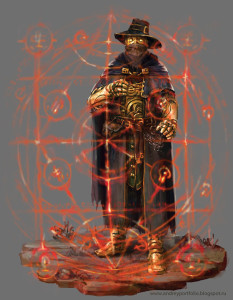 Adventures for Shadow of the Demon Lord are made for four experience levels: Starting, Novice, Expert, and Master. Characters don’t begin with a class. Should they survive their starting adventure, they’re suggested a basic class based on how they handled things in that first game. Novice, Expert, and Master classes all offer options along the usual lines of fighter, priest, rogue and wizard, but each break point lets the player choose from any class available without prerequisites or restriction. Want to play a Blood Priest that’s a Gunslinger and an Elementalist? Or an Assassin that’s a Berserker and an Oracle? This style of play appeals both to players that like to meticulously plan out a character arc and those who like to just see where their character ends up.

While the game is designed to stretch across 11 levels, the milestone experience lets GMs set the pace they want. Not only do the tiers offer different starting points in power and complexity, but the game allows runs where each session could unlock a new level, or a slightly slower pace for groups that want to take their time exploring the gritty world detailed within the core book.

Since the Kickstarter that launched the game last year, nearly 100 supplements have been released. A few offer new ancestries and classes, but the majority are adventures across all fourth power levels. Because these are digital releases (though the larger ones can also be purchased as print-on-demand products), a GM can pick up an adventure or two for the next few weeks of gaming for the price of a paid app or a new album from the Apple store.

What’s your favorite dark fantasy media? Creep us out in the comments below.