It Turns Out Starfish Gallop Using Their Tiny Tubular Feet

You’ve undoubtedly experienced rare, life-changing moments where some discovery altered the way you perceive existence forever. Well guess what: Another one of those moments may occur right now, as you realize that starfish can, indeed, gallop with their tiny feet. Below is video proof of that fact, which, as far as we’re concerned, demonstrates that the Matrix is real.

Laughing Squid reported on this mind-boggling video of galloping starfish zooming about. KQED and PBS Digital Studios’ series, Deep Look, recently posted the video to its YouTube channel along with a cute backstory.

Apparently, on a research trip to a friend’s lab in Tokyo, marine biologists Amy Johnson and Olaf Ellers stumbled upon these starfish galloping. Despite their oceanic expertise, neither marine biologist had ever seen this behavior. In fact, they found out that, prior to this discovery, there was no description of this behavior in scientific literature.

“It was an absolute epiphany,” Johnson said in a KQED blog post. The marine biologist, who teaches along with Ellers at Bowdoin College in Maine, added that “[The] moment we first saw [the starfish] go faster by bouncing completely transformed everything we were planning to do with our research.”

Johnson and Ellers’ findings were originally published in December 2019, but this new Deep Look video offers a unique glimpse at the starfish’s horsiness. The video also explains the way starfish—a.k.a. sea stars—move about using the “tiny tube feet” on their arms. Starfish have hundreds, or sometimes thousands of these tube feet, called podia, on their undersides. And they all work in unison to move a starfish.

They’re not just colorful creatures lounging in the sea. Starfish have hundreds of water-propelled feet to help them hunt. Watch them gallop in our new #DeepLook episode! https://t.co/iBGMSw6cXo pic.twitter.com/SCmWtBuWqv

“It’s like running compared to walking,” Johnson told KQED, describing the way the starfish gallop. “They kind of vault themselves forward.” The clip in the tweet immediately above shows a starfish’s tiny tube feet in action. Note how the starfish works its hollow feet by filling them up with water from its ampulla sacs. As well as how the feet lengthen and stiffen in the middle of each step. (When just cruising, the starfish simply elongate and contract their feet.) 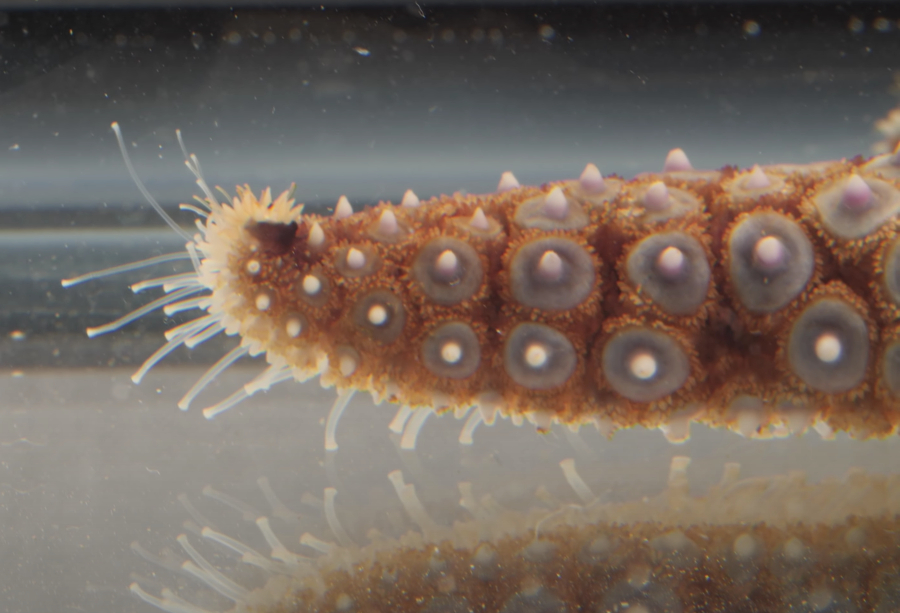 As far as witnessing this extraordinary behavior out in the wild, your chances are slim. Ellers told KQED that starfish normally just sit around, or move at a glacial pace. “If you want to see them bounce,” he said, “you have to get them excited about something.” And for those wondering, yes, Ellers and Johnson used food to excite the starfish. ‘Cause nothing makes these little starfish come gallopin’ like some good feed!